The artist’s muse is one of the most romanticized figures in art history, if not in the entire pop culture imagination.

Gustav Klimt, Portrait of Emilie Flöge (1902)
Klimt’s muse, lifelong friend (and maybe more), avant-garde dressmaker Emilie Flöge. The two collaborated creatively throughout their lives, Klimt guest-designing dresses for Flöge’s company and Flöge also designing dresses and posing for his paintings.
But today, the traditional image of the muse—a young, beautiful woman “discovered,” polished and presented to the world on a silver platter by a (white, male) creative genius—is headed to the long-overdue guillotine. Why?
Well, for one thing, #MeToo has exploded the longstanding status quo of power dynamics between genders. Meanwhile, the art world, following Millennial and Gen Z culture, is making strides to decolonize its thinking. This means throwing out old stories of who gets to be a known as a great artist—and who gets stuck in supporting roles like muse.

Muses through the ages

In the past, white, male artists have hogged the “creative genius” spotlight, while, paradoxically, women and people of color have inspired many of Western art’s masterpieces. Think Gauguin’s Tahitian women, Ingres’ La Grande Odalisque, Delacroix’ Femmes D’Algers dans leur appartement, or the entire Orientalism movement of the 19th century.
Famous artist-muse couples like Picasso and Marie-Thérèse and Camille Claudel and Rodin are etched into art history, but we usually forget that these women were artists in their own right, not to mention human beings with their own subjectivity. Take Rodin and Claudel’s case—she was an accomplished sculptor and collaborated with Rodin on his art, but history has only remembered her as model, lover and muse.

Even today, the same model of the muse as passive subject is reproduced implicitly in the work of artists like Nobuyoshi Araki and Henrik Purienne. There’s nothing inherently wrong with a sexualized picture of a conventionally hot woman, and I’m not advocating for silencing anyone’s creative voice, but you have to pause and ponder the implications. What exactly is being said here? 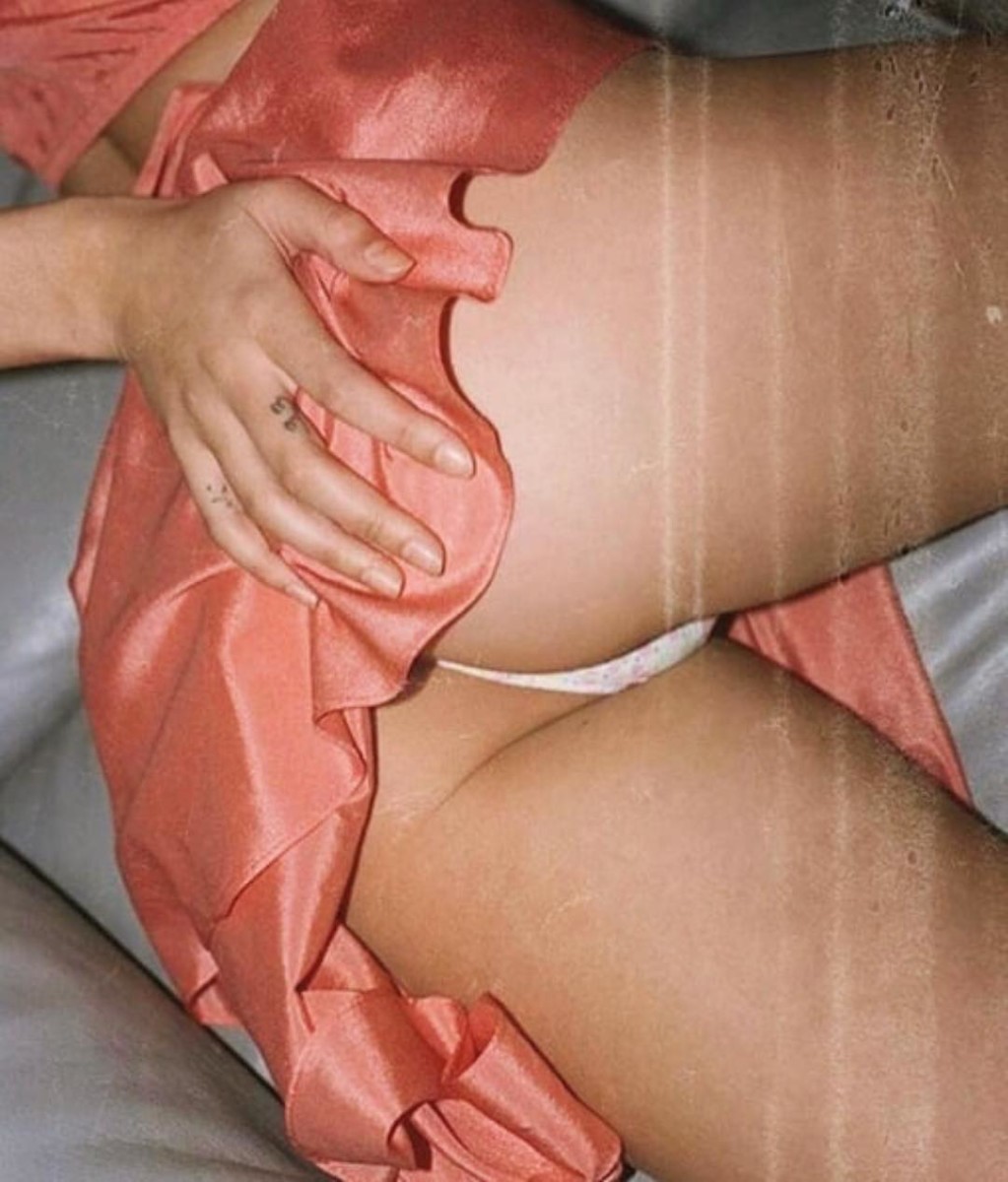 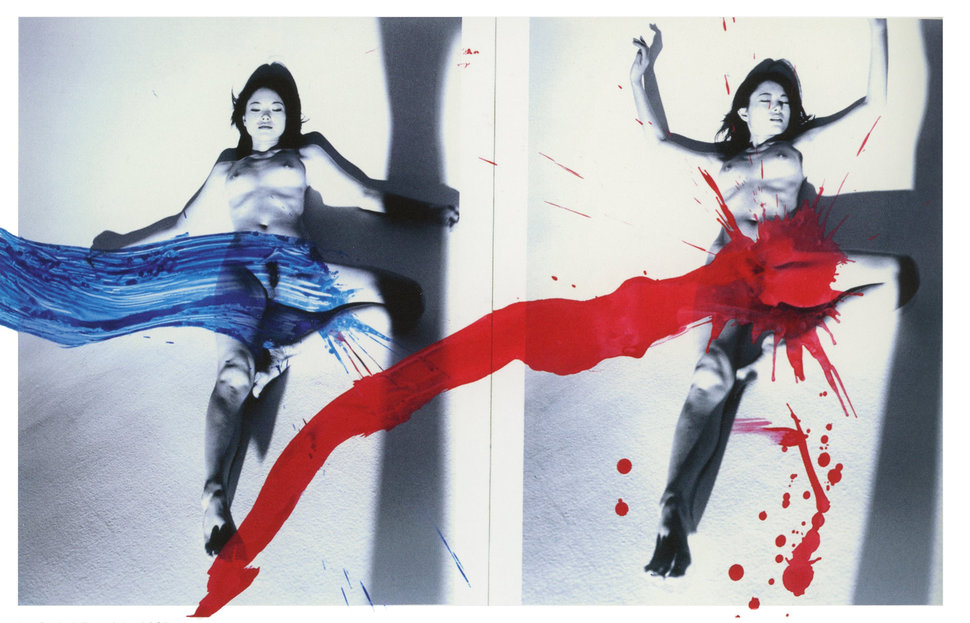 Nobuyoshi Araki, KaoRi Love (2007)
But that doesn’t mean that we all have to hang up our muse caps for good.
The ongoing search for inspiration is a huge part of being an artist, and the whole world is fair game: nature, cities, music, animals… and other people. Who hasn’t been completely electrified by someone’s aura, whether it’s a friend, a famous musician or just some girl you found on the Internet? The role of the muse is essential to the art universe, and that’s not going to change anytime soon.
Not should it. For a young, aspiring artist, collaborating with a more mature artist on a deep, energetic and intimate level can be hugely empowering and help them advance in their craft.

It’s the rest of us that need to stop putting these relationships in such a rigid box. It’s 2018, guys! If you can be a lawyer, Reiki healer, vegan blogger and deep house DJ all at the same time, I think you can be a muse and have your own career/internal life/art practice, too. In fact, we should shift our thinking about the artist/muse relationship as one of collaboration, a constantly flowing exchange of ideas and inspiration, not a one-way channel. 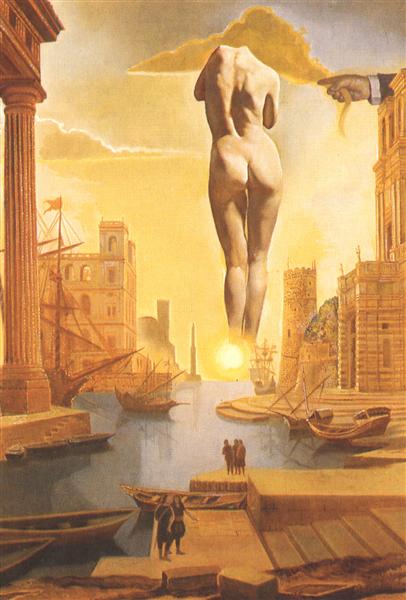 If there’s one artist who gave credit where it was due, it was Dalí. The title says it all: Dalí’s Hand Drawing Back the Golden Fleece in the Form of a Cloud to Show Gala, Completely Nude, the Dawn, Very, Very Far Away Behind the Sun (1977).
And journalists: please stop treating artist muses like they’re just an outward projection of the artist, like another limb or a static piece of artwork. For every question you ask them about their relationship with X virtuoso, ask them one about their work, their opinions, their anything. Just treat them as a multi-layered human being with opinions and insights of their own. After all, that’s probably what attracted the virtuoso in the first place.
But for the artist-muse relationship to thrive in a post-#MeToo, post-colonial art world, we all need to let go of this “paint me like one of your French girls” image of an older man and a young woman. Muses, like artists, come in all ages, genders, colors and sexual orientations—it should go without saying. 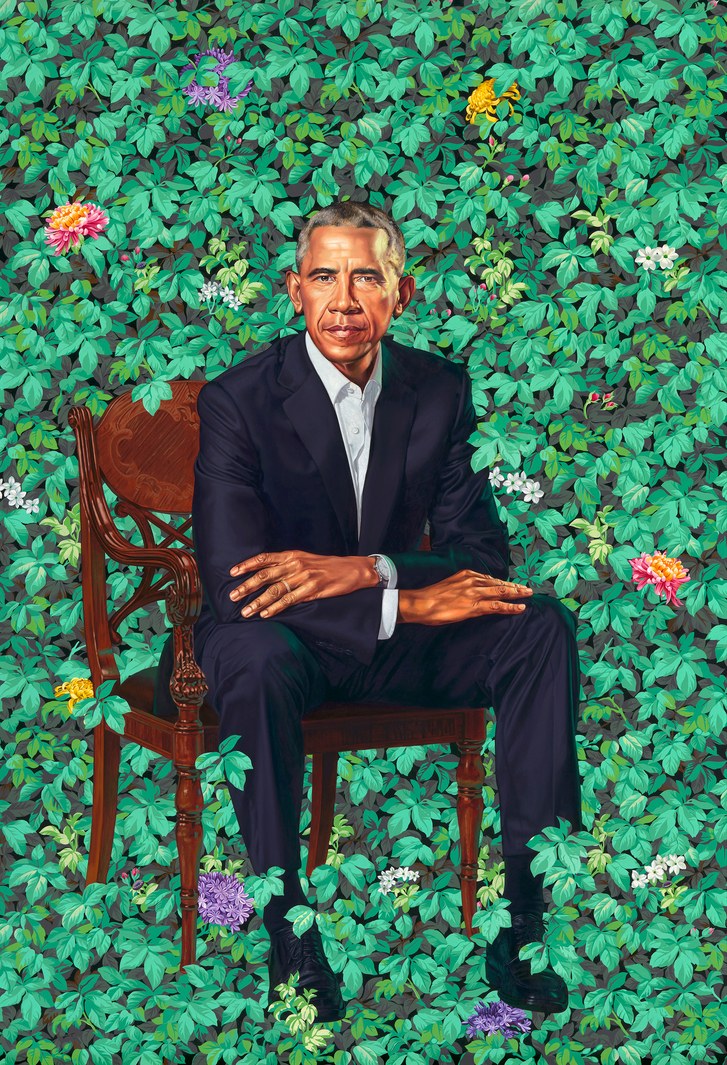 Kehinde Wiley, President Barack Obama (2018)
Who says presidents can’t be muses? Kehinde Wiley’s first subjects were young men he photographed on the streets of Harlem. His work is shifting the paradigm on what kinds of bodies are considered beautiful and inspirational for artists.
In her first book, Muse, American artist Michalene Thomas celebrates the women who have posed for her photos, many of them close friends. In this way, she honors the artist-muse relationship, as well as the personal and public histories of the women. The pictures are also a nod to a diverse range of references, from the academic tradition and impressionists like Edouard Manet to the Black is Beautiful movement of the 1970s. She hopes that women of all ages, colors, shapes and sizes will be able to find themselves in the emotions that her models bring forth. 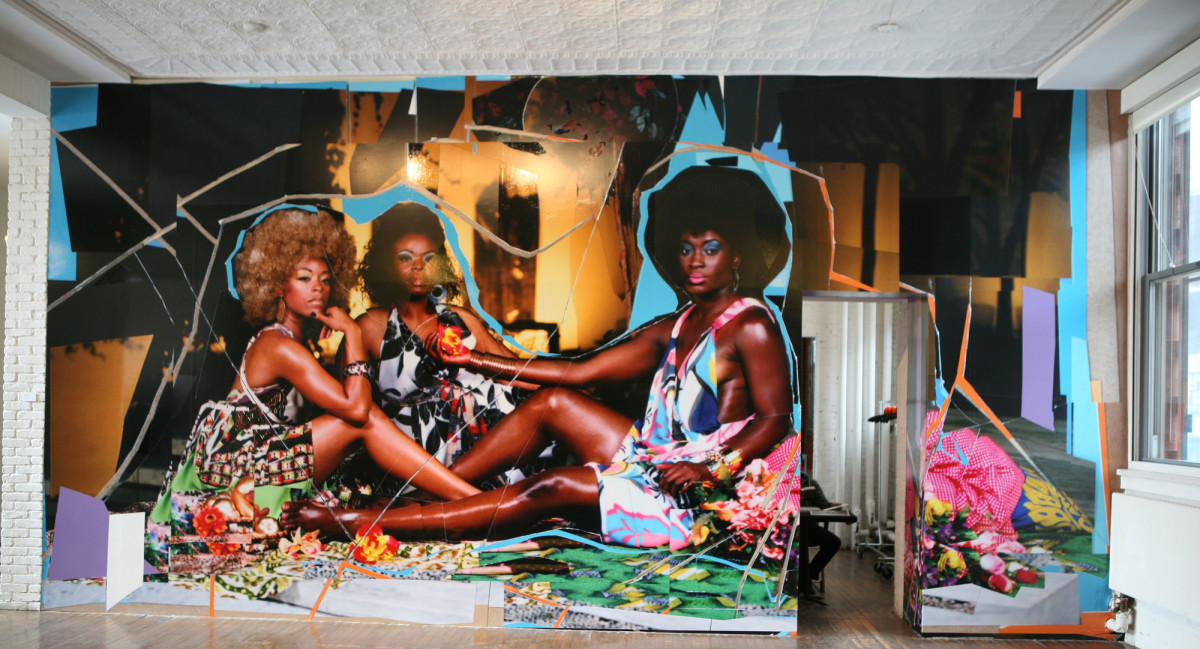 Clearly, being a muse in 2018 is a far cry from what the experience would have been in, say, 1800. With that in mind, let’s dive into why it’s still absolutely worth it to become an artist’s muse.
1) You’ll start to see yourself in a whole new light.

Who knows what hidden sides of your soul will come to light on the canvas? Plus, posing for a painting is a way cheaper and more fun form of self-discovery than going to therapy or learning self-hypnosis.

Even on the off chance your artist isn’t Picasso, you can always pick up a few tips and tricks by watching someone else’s process. It’s a win-win.

3) It adds a fun little layer to gallery openings.

It’s super satisfying to watch people’s eyes move from your face to the canvas and back to your face as the realization slowly dawns on them.

4) Lots of new IG followers from being tagged in photos.

Super helpful whether you’re trying to gain exposure for your own art or just want more likes on your selfies. No shame. 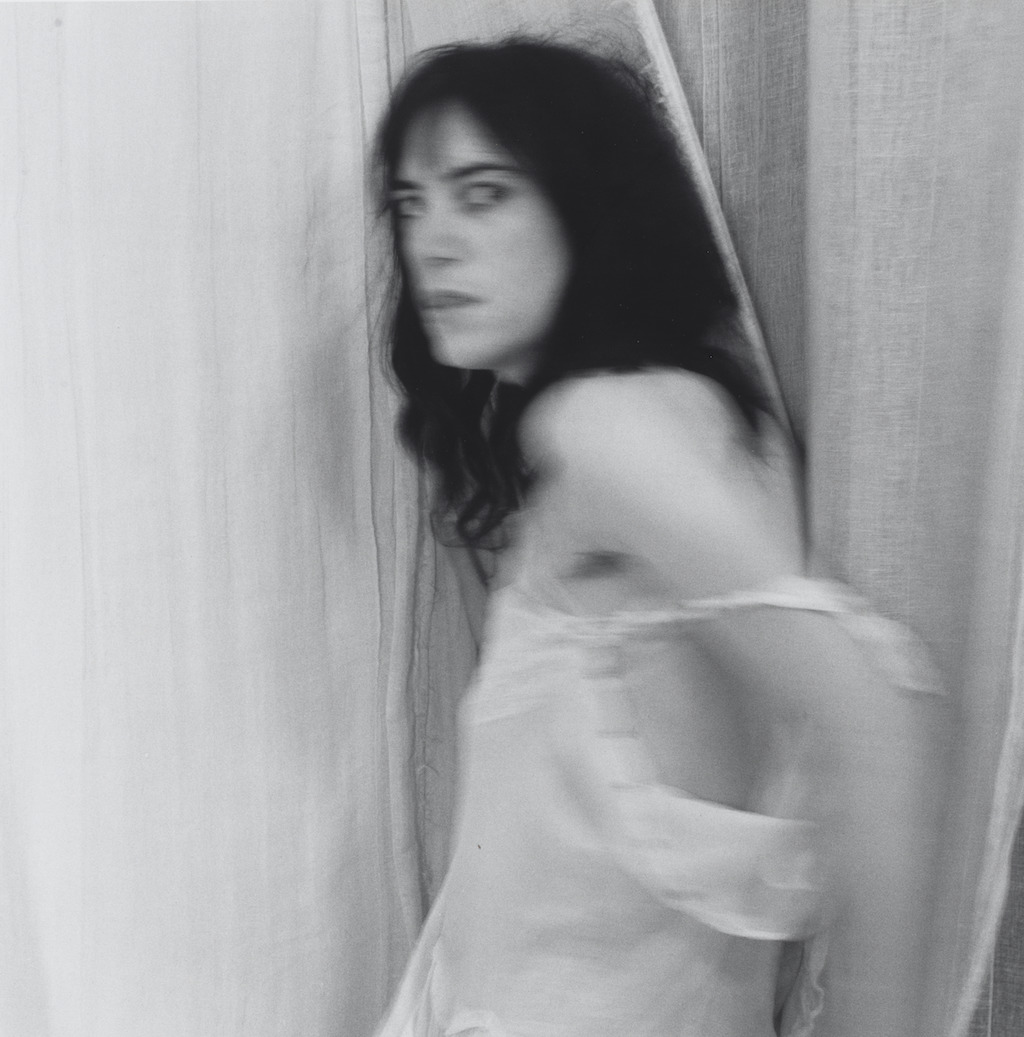 Robert Mapplethorpe, Patti Smith (1978).
In case you haven’t read Just Kids (in which case, do so immediately, it’ll change your life), Patti and Robert are basically the gold standard of artist/muse relationships. They lived together for years in 1970s New York City, supporting each other when they were both young and broke aspiring artists and profoundly shaping each other’s artistic development. Lifelong best friends and sometimes lovers, they could not have become the artists they did without each other.

Remember when your mom used to make you do your chemistry homework, saying that when you grow up, no one was going to pay you to sit there and look pretty? Well, joke’s on her.

This could be your sneaky ticket into new collaborations, a finally snagging a gallery or your next role. Or if not, it could always just be a rad night that’ll inspire your next painting/poem/interpretive dance/performance piece.

Even if, worst case, the reporter just wants to talk about what the artist eats for breakfast, how they hold their camera and what they’re “really like in their unguarded moments,” you can find a way to drop your IG handle/portfolio link in there. So often, interest in a person bleeds into interest in their art and vice versa. Any press is good press!

8) You’ll never be at a loss for a new profile picture.
9) You get to tell all your high school friends that you’re an “artist and muse” when you go home for the holidays.
10) Lots of flattering pictures of yourself.

That means you’ll never stress about little things like the 1.5lbs you gained from a weekend of hardcore baking ever again. You are a beautiful and infinite being with an expansive soul that inspires transcendent, visionary artwork. No amount of chocolate chip banana bread will change that! 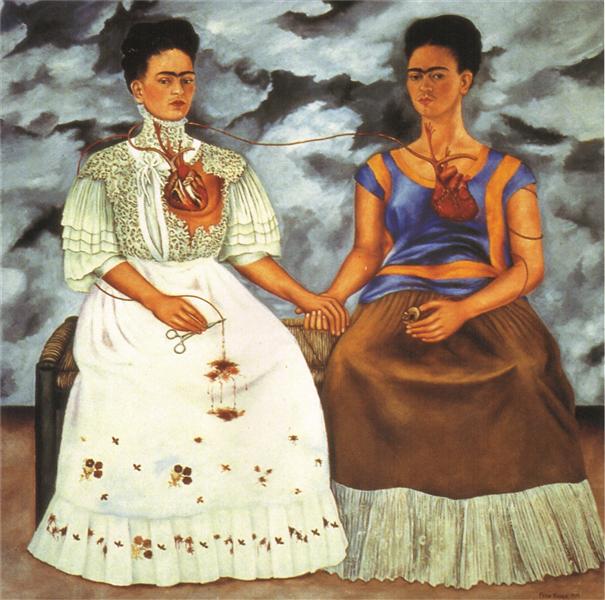 Frida Kahlo, The Two Fridas (1939)
That said, who says you need an(other) artist to be a muse? This is the DIY generation, you guys—the era of selfie feminism. Embrace the spirit of the great Frida Kahlo and tap into your own inner muse. What are you waiting for? Romanticize yourself and everyone else will, too. 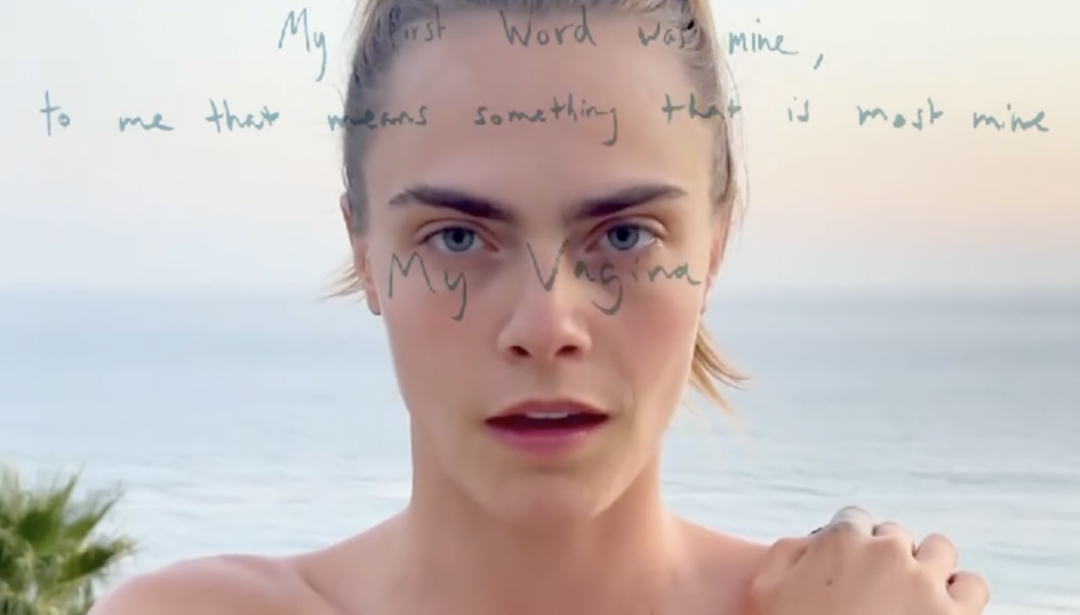 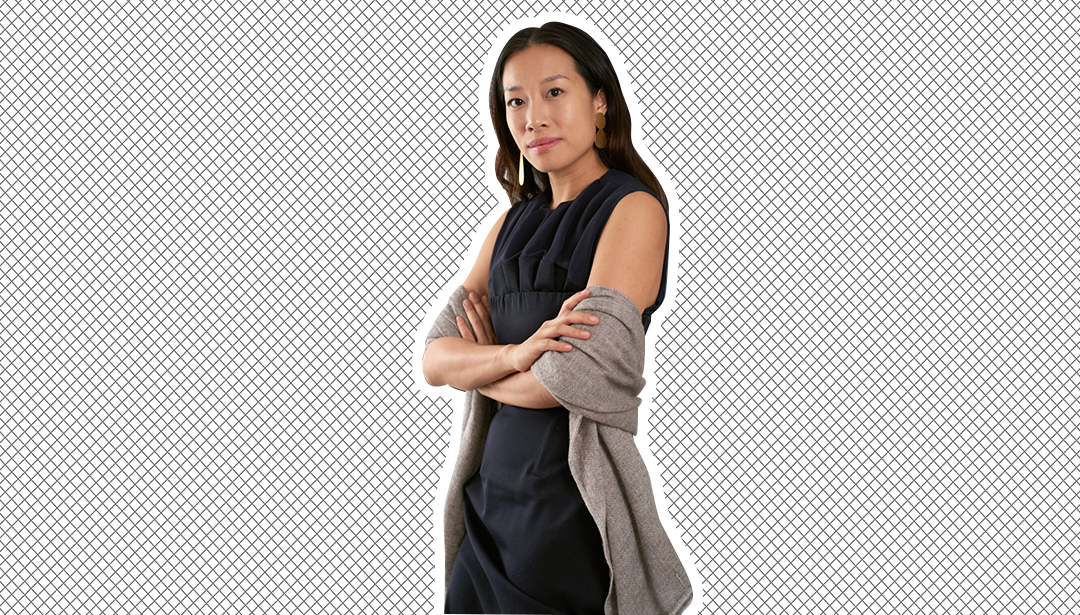 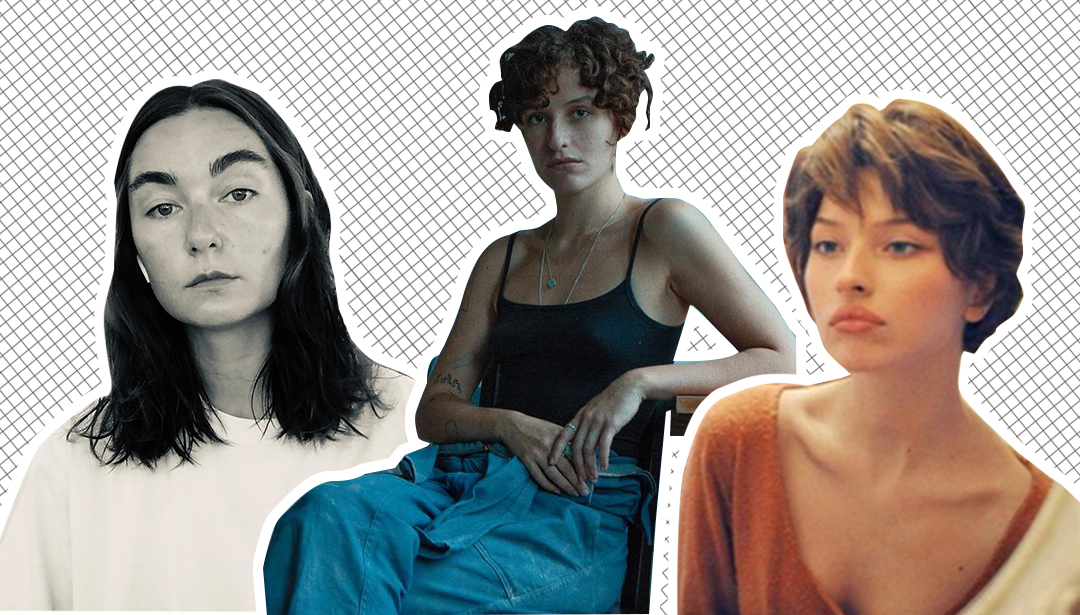