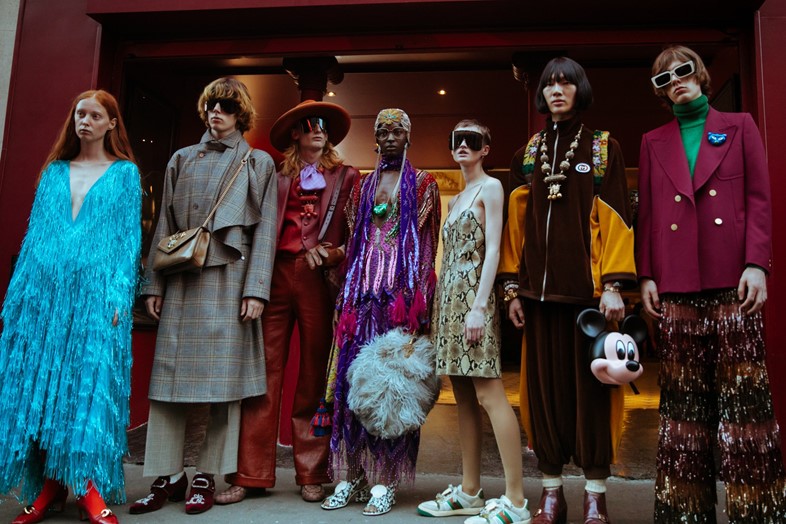 Image of Gucci SS /19 via Dazed
Last week saw the curtain close on Paris Fashion week, which signified the end of yet another crazy Fashion Month. And if Paris Fashion Week is any indicator to go by, women’s clothes are destined to go dark next spring, accessorized with tiny handbags and oversized glasses.
For those of you who were busy last week, do not worry, as we have rounded up all the best art moments you missed at PFW, to keep you in the loop. 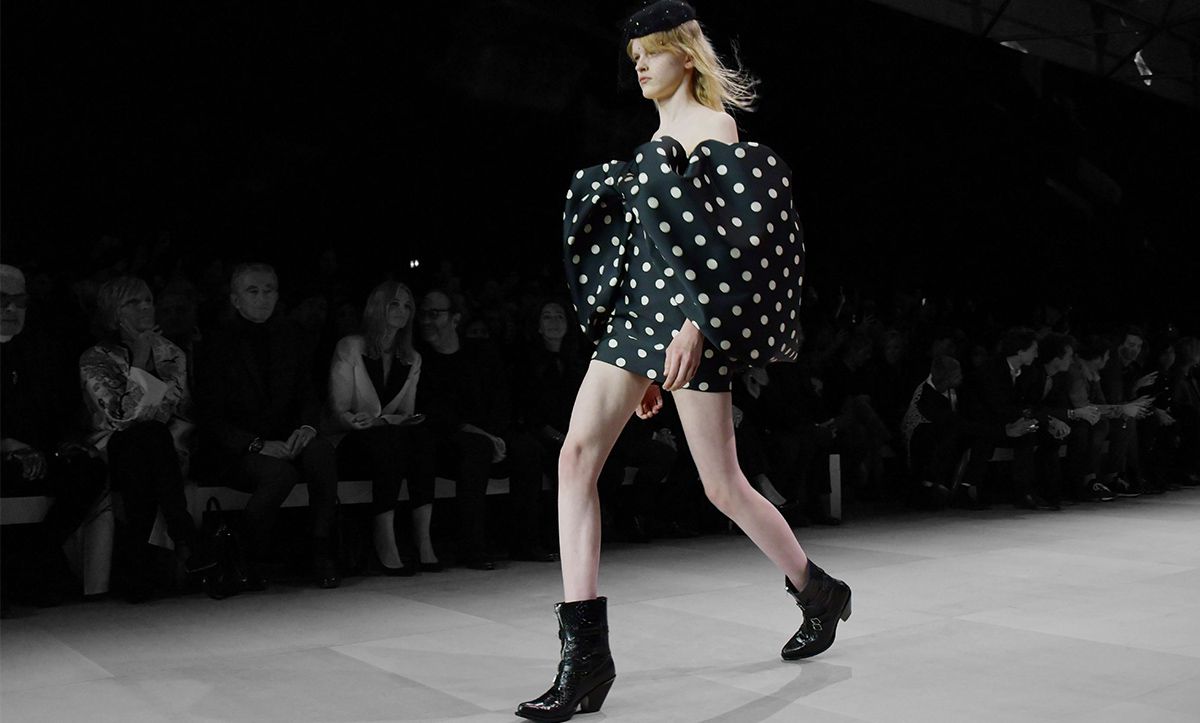 Image: Celine via NSS Magazine
The fashion industry is often called-out for its lack of diversity with runways typically seen as a display of racial and physical homogeneity. However, most of this season designers showed that change is finally upon us with a colourful line-up of models in all shaped and sizes – hooray! But, one designer didn’t seem to get this memo… After Hedi Slimane’s debut spring/summer 2019 Celine show, hordes of fashion fans took issue with his casting, which was dominated by skinny models, with 87 of the 96 being white. Comments such as “narcissistic”, “tone-deaf” and a “big f*** you to women” trended after the show. Loyal followers of the former Creative Director, Phoebe Philo, were also shocked to see that Slimane had replaced her minimalist aesthetic with his own signature sexed-up, rock-and-roll-inspired looks – yawn! Alas, nothing new to see here, so let’s move on! 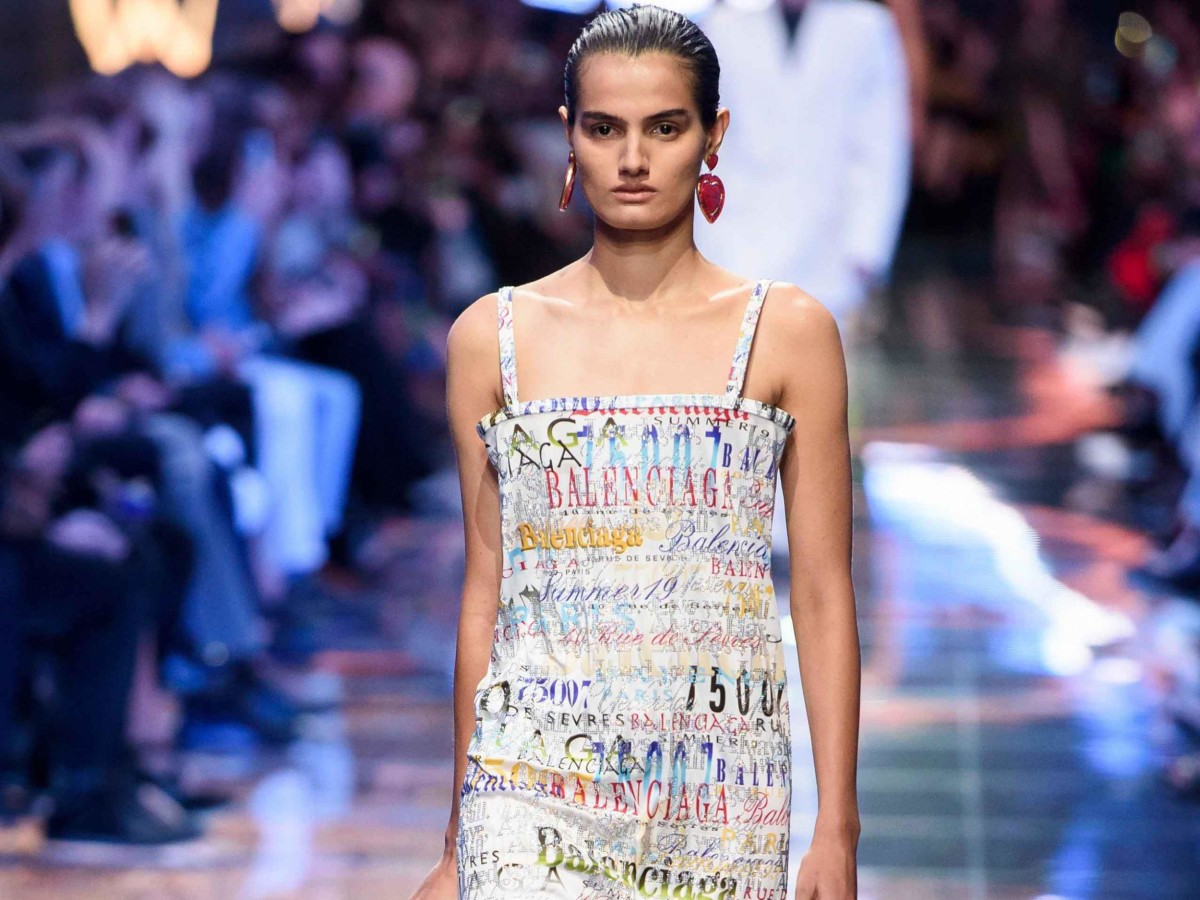 Image: Balenciaga via Independent
For spring/summer 2019, Balenciaga presented a show focused around technology’s impact on society. Models in futuristic office wear, adorned in Clip Art effects, were sent down an art installation that resembled a narrow, tunnel, by Canadian artist Jon Rafman, As models started making their way through the tunnel, an ominous soundtrack kicked in, and the lighting altered from blue, to red, through to green, which finally became static snow. The best look being the closing ensemble which came emblazoned with the Balenciaga logo re-imagined in oodles of different Microsoft Word fonts, including Comic Sans – the joke of the typography world. Once universally hated, the san serif font is now officially in fashion darling!

LIFE’S A BEACH AT CHANEL 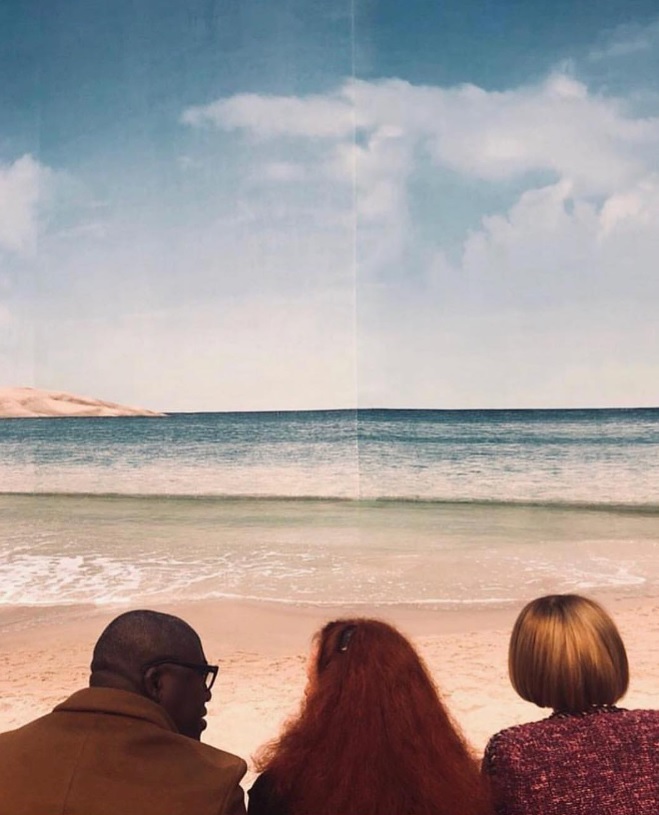 Image: @c__l__oRegram @edward_enninful  @denagia – @chanelofficial SS19 show
Fans have come to expect a powerful catwalk setting from Karl Lagerfeld, and on the final day of Paris Fashion Week, this season offered yet another wonderful surprise. While previous years have seen the designer magically transform the runway into everything from a supermarket to a space station. This time around Lagerfeld recreated a beach that included an ocean with waves, a dazzling blue sky and lifeguards. As the sound of seagulls beckoned the start of the show, models floated along the sand in swimsuits, sun hats and bags shaped like beach balls.  This generation may also approve of the brand’s sustainable efforts. After the show, Chanel announced that the water used would be reprocessed by the Paris sewage system and the sand recycled by the construction industry. A welcoming change from the designers last collection, which was plastic fantastic! 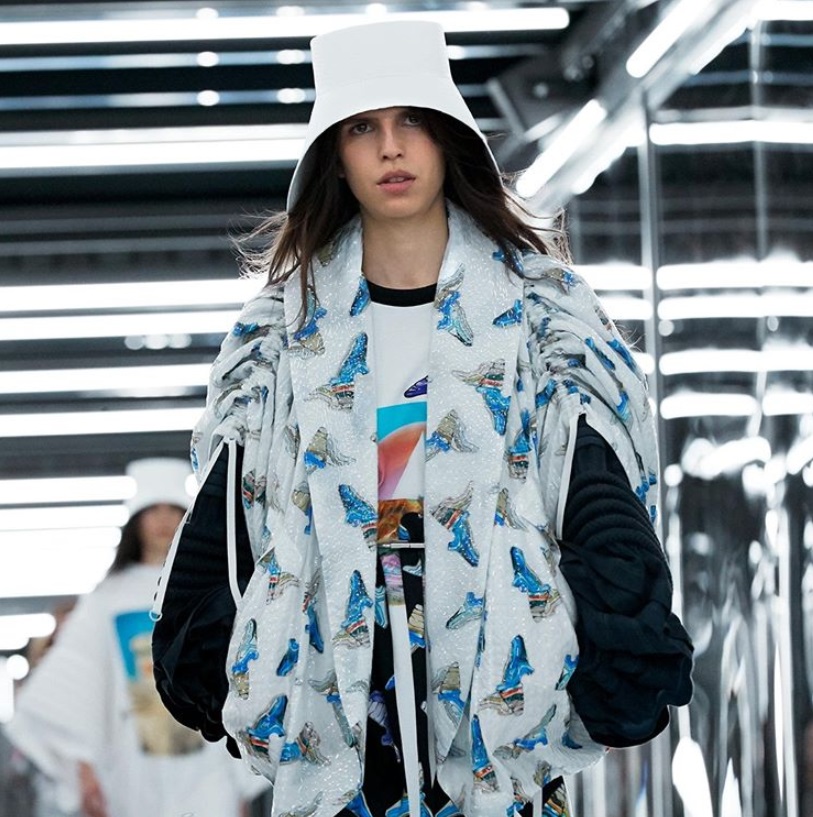 Image: @ louisvuitton#LVSS19 by @NicolasGhesquiere.
Staged on a catwalk in the elegant courtyard of the Louvre, Nicolas Ghesquière’s show closed PFW with a contribution to the cultural conversation; with the overall vibe best described as a stylish Parisian on her way to a party in space.  Ghesquière noted that “Every piece that I designed for this collection, I asked the question: is it powerful for a woman to wear this? Does it give her strength?” He went to on to further comment that his inspiration behind the collection was – “about my obsession with empowering women. In the last two months the question of what it means to be a woman has felt so important so, this time around, I wanted to make that the only criteria. There is no other narrative to this collection, no story. It’s just about dressing women to empower them.” 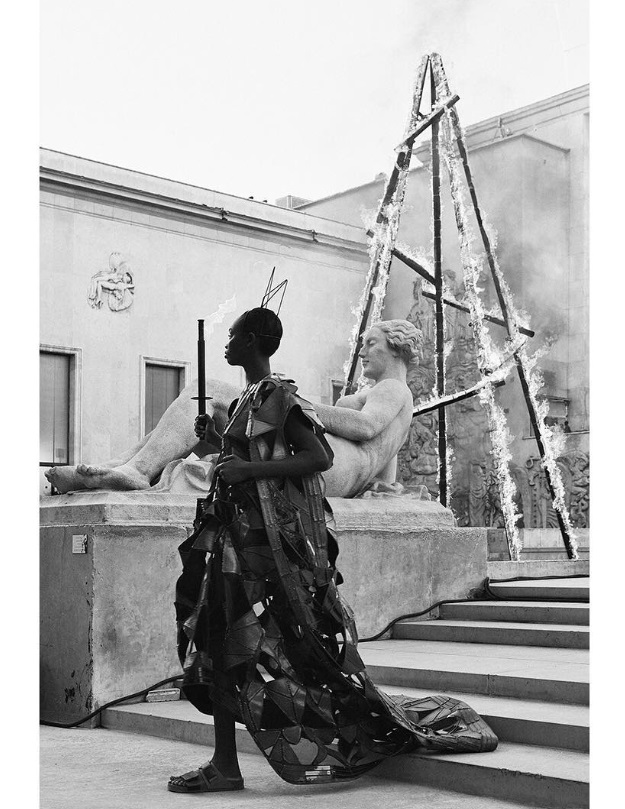 Image: @rickowensonlineSUBAH, SS19 BABEL WOMENS #RICKOWENS
Last week Rick Owens orchestrated a visceral, ritualistic ceremony for his spring/summer 2019 show at the Palais de Tokyo.  At the centre of the show, the fountain was drained, and a tower was erected in its place. As the models circled around the tower it suddenly became engulfed by flames, giving a ritualistic, pagan sense to proceedings. According to the show’s notes, the setting and collection were designed for a coven of witches, who live in the mountains casting hexes and spells, while searching for order and reason. Where two seasons ago guests were given waterproof ponchos to shelter them from the rain, this time around on each seat was a goodie bag, which included mini bottles of Mezcal, a visor, and a spanking paddle… interesting.

GUCCI’S ODE TO FEMALE ICONS THROUGH THE YEARS 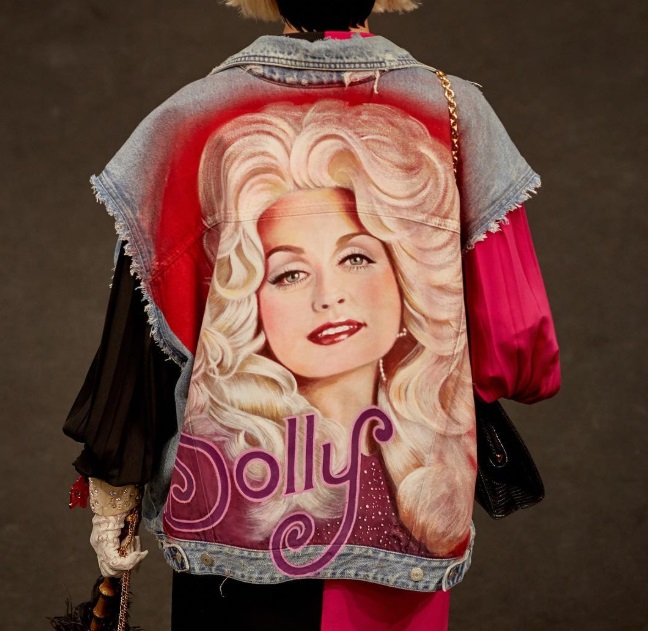 @gucci In a tribute to the most honored female country performer Dolly Parton, a sleeveless denim jacket with her image on the back,
For the spring/summer 2019 Gucci show the invitation came in the form of a plant bulb … What did this have to do with the collection? We actually have no idea. As per, the front row was v.star-studded, including Faye Dunaway, Jorja Smith, Agnès Varda, Jared Leto and a very pregnant Soko. The show was held in La Palace a theatre, a former nightclub. Opening with a psychedelic film showing two possessed models getting freaky in a baroque house, made by the Italian duo Leo de Berardinis and Perla Peragallo. The clothes were what you would expect from Alessandro Michele, heavily embellished, colourful, eclectic, and pretty much all over the place. Our favourite looks of the season being Gucci’s ode to female icons including a tribute to the most honored female country performer of all – Dolly Parton, painted on the back of a sleeveless denim jacket. 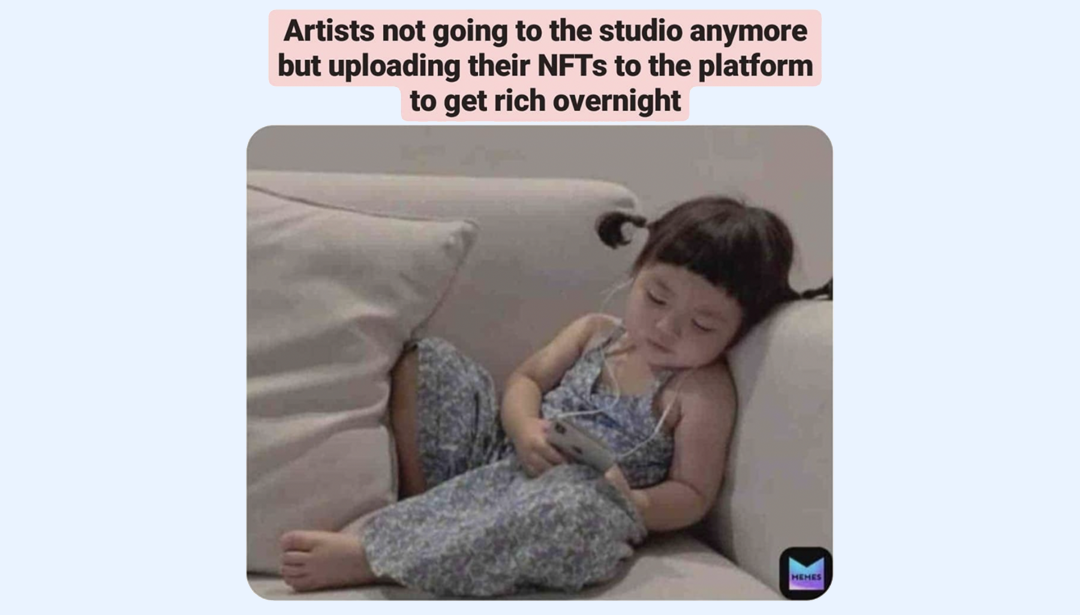 These Are The New Power Players In The 2021 Art World 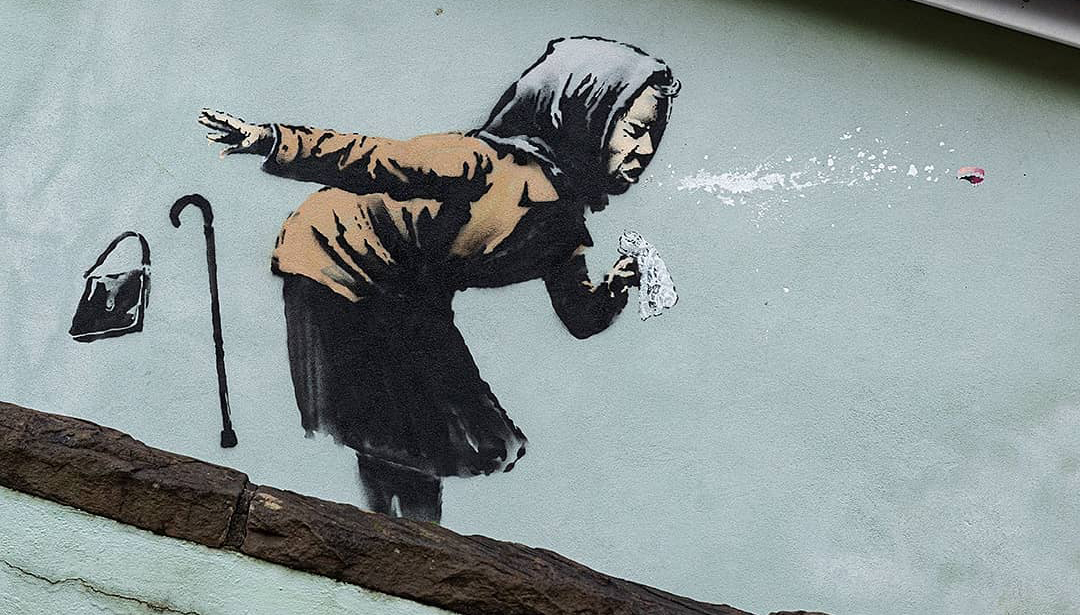 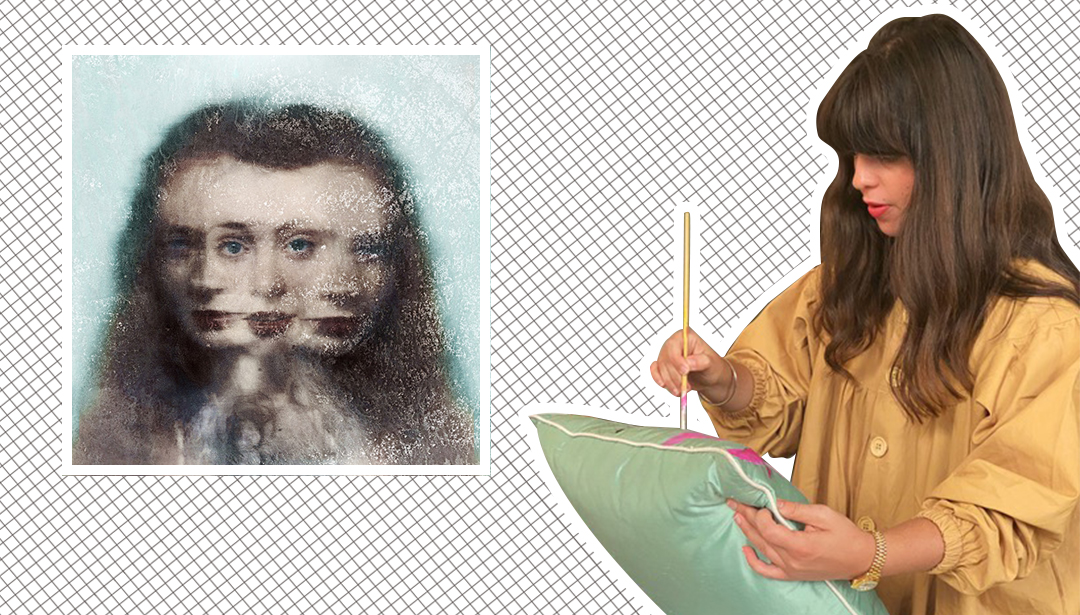