Image via Tenor
Love is in the air…well for some of us anyway. Yep, it’s that time of year again. A time adored and abhorred by people throughout the globe. It’s Valentine’s Day — the “Hallmark holiday,” that generates billions of dollars in flower, candy, and jewelry sales annually. Maybe you’re about to exchange a bundle of roses and cards with your sweetheart. Perhaps you’re about to go out and buy the largest box of Godiva chocolates for a party of one. Regardless of your plans [or lack there of], today can still be a celebration of your love of art.
In honor of all things “love” and art history, TheArtGorgeous takes a look back on famous art power couples. As you will see love comes in many forms: 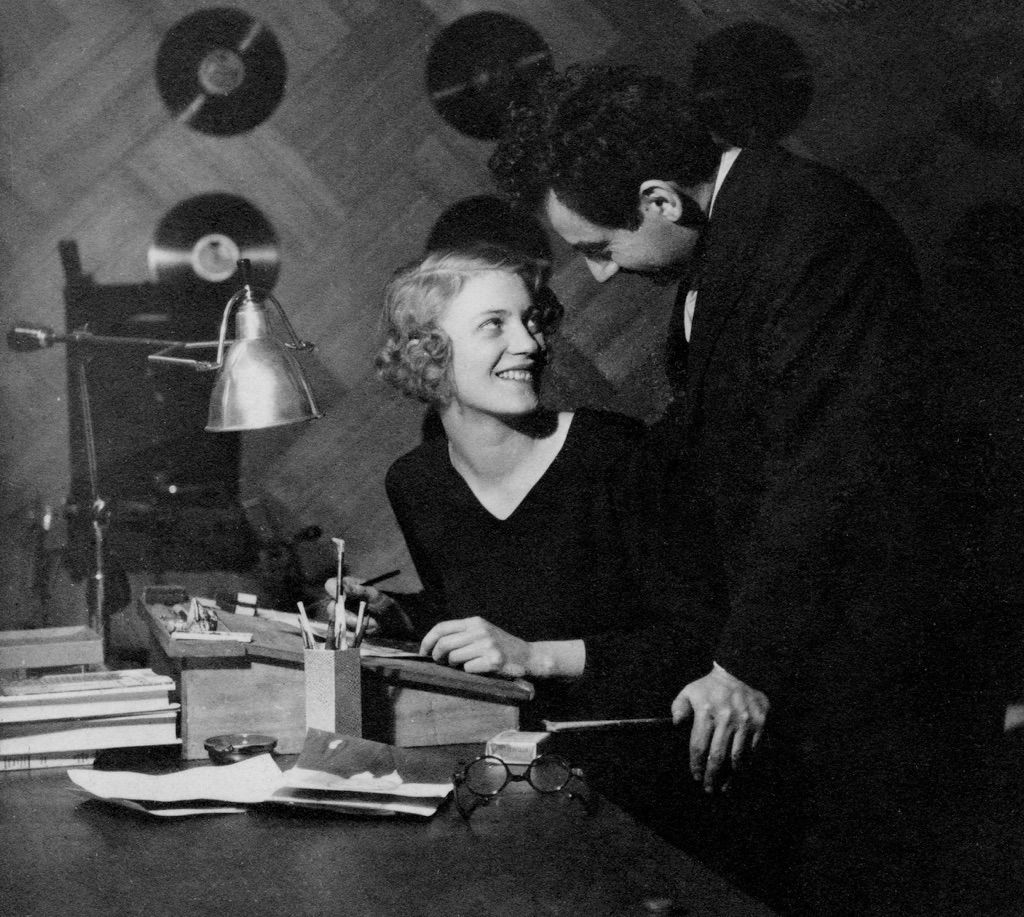 Image via Pinterest
Lee Miller: Photographer
Man Ray: Visual Artist
Lee Miller and Man Ray’s love affair began where so many romances do, in the city of Paris. In 1929, Miller journeyed from New York to Paris on a mission to find Man Ray. She had hoped when they finally met that she’d become the surrealist artist’s apprentice. Man Ray insisted he didn’t have time for students, but Miller refused to take no for an answer. One thing led to another and Miller soon became Man Ray’s muse, collaborator, and lover. 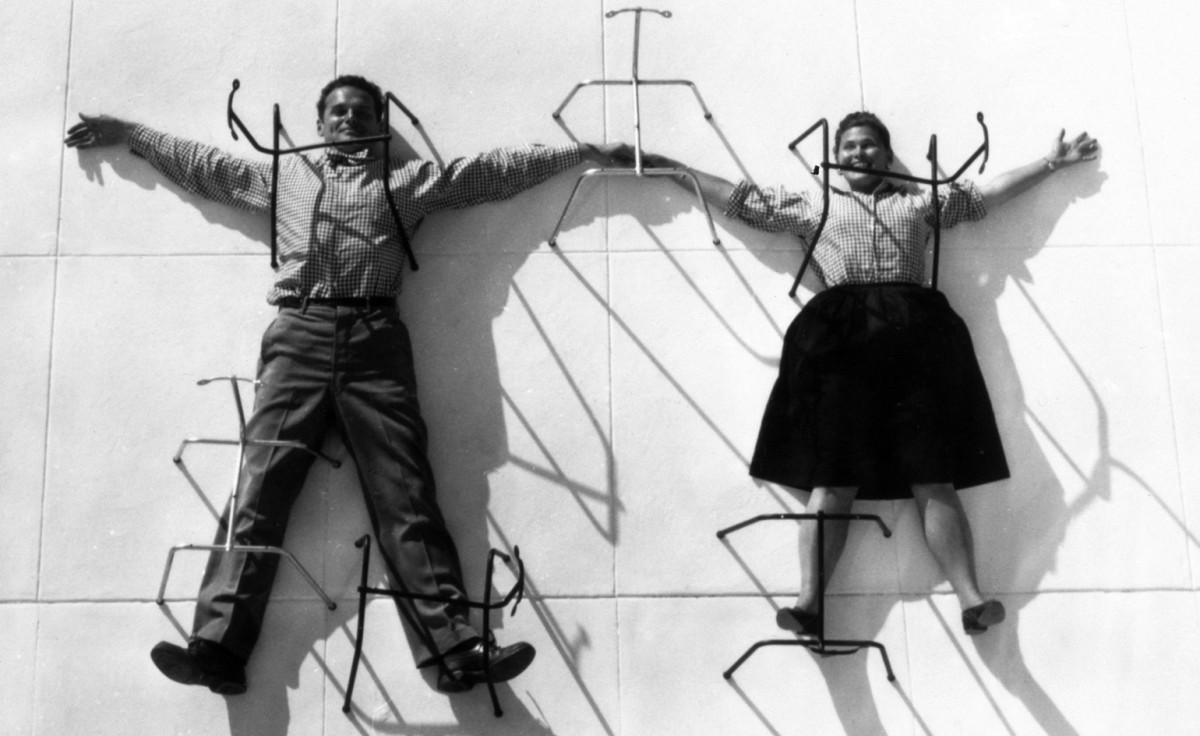 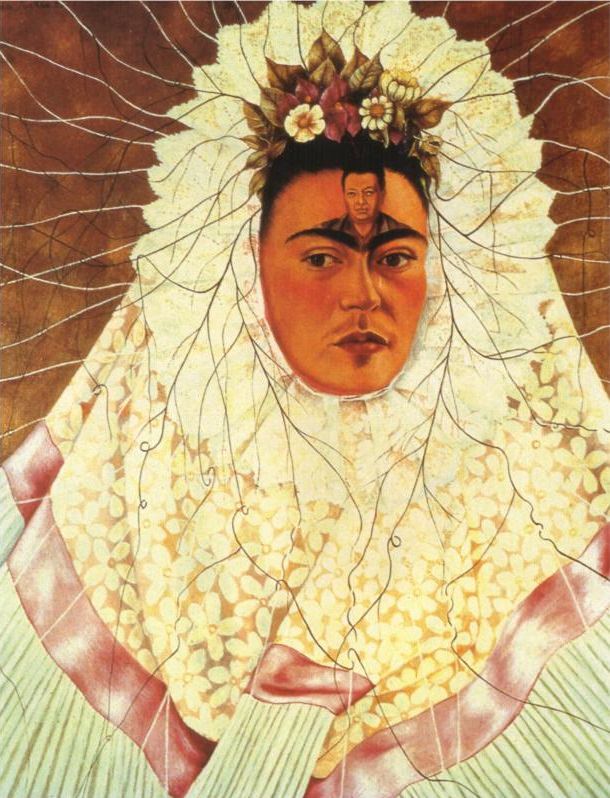 Thinking of Diego [Self-Portrait] by Frida Kahlo (1943)
Diego Rivera: Painter
Frida Kahlo: Painter
Diego Rivera and Frida Kahlo’s relationship is arguably the most well-known and documented in art history to date. The Mexican artists and painters had successful careers respectively throughout their tumultuous relationship. They married in 1929, divorced after 10-years of violence and affairs, only to get remarried a year later in 1940. Frida Kahlo’s surrealist self-portrait, Thinking of Diego (1943) [see above], includes a representation of Rivera as Kahlo’s third eye. 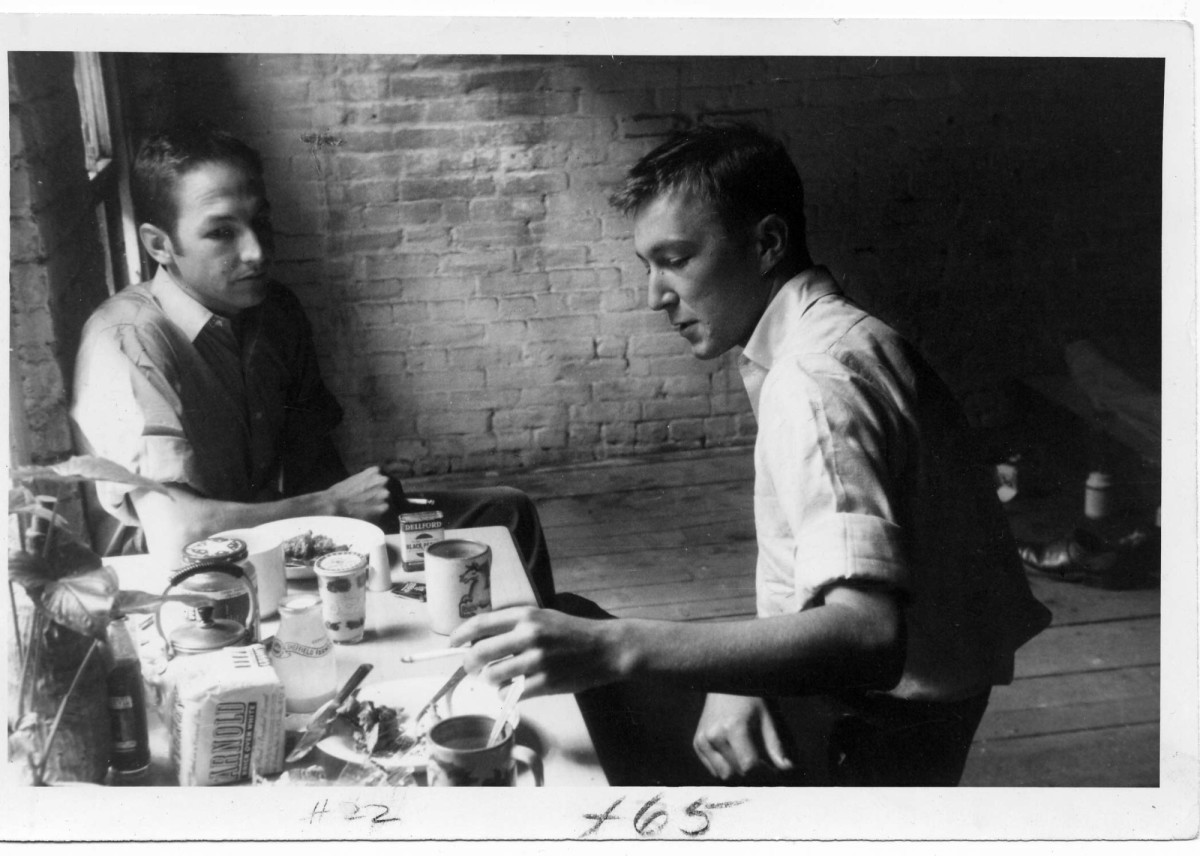 Image via MoMA
Rauschenberg: Painter/Sculptor
Jasper Johns: Painter/Sculptor
The two artists and major contributors to the AbEx movement developed a friendship turned courtship in the late 1950s. Rauschenberg and Johns kept their romance closeted given the negative attitudes toward homosexuality at that time. 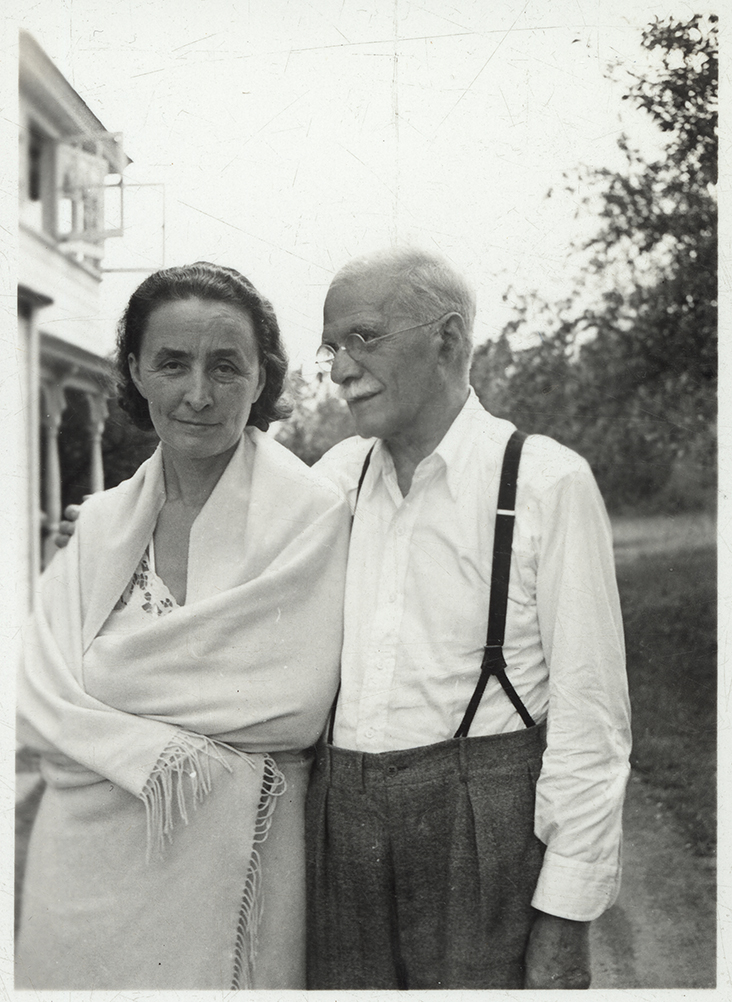 Image via The Georgia O’Keeffe Museum
Georgia O’Keeffe: Painter
Alfred Stieglitz: Art Dealer/Photographer
Georgia O’Keeffe was a budding artist 30-years Alfred Stieglitz’s junior when the two creatives paired up. They first met in 1916 when Stieglitz hosted a series of O’Keeffe’s paintings in his gallery. They married in 1924 and over the course of their lives together exchanged over 20,000 letters. Keep that in mind the next time you leave your beau on read.

Love can be Deadly… 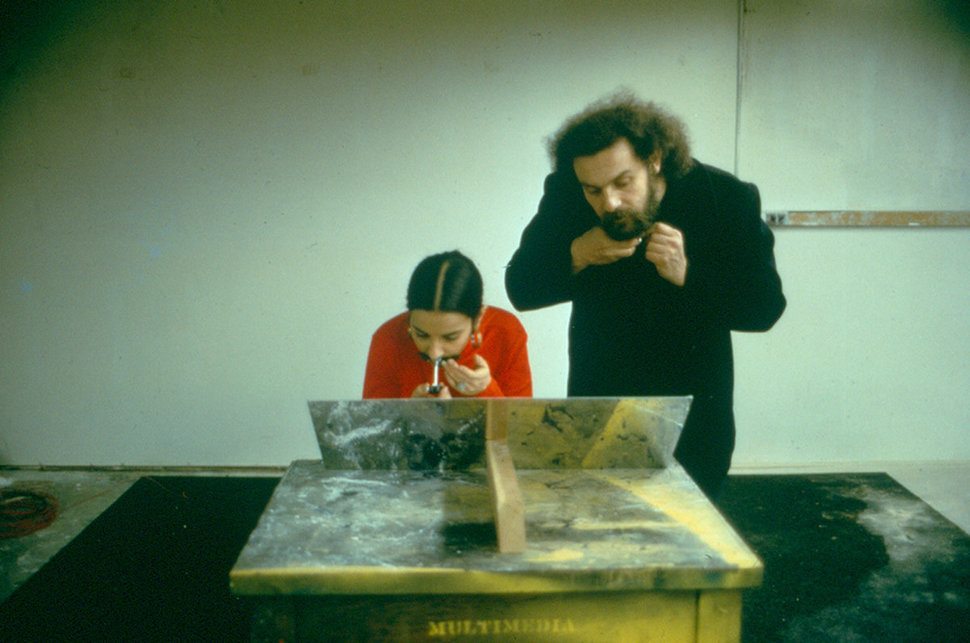 Image via HuffPost
Carl Andre: Sculptor
Ana Mendieta: Performance Artist
The relationship between American minimalist, Carl Andre, and Cuban-born performance artist, Ana Mendieta, might very well be the art world’s most controversial. In 1985, Mendieta was tragically killed a mere handful months after she and Andre tied the knot. The young artist’s infamous “fall” from the couple’s 34th story apartment window continues to trouble the art community.
Eyewitness accounts of Mendieta’s death, including a report from someone who heard a woman screaming, “No, no, no, no,” before Mendieta’s “fall” have led many people to believe her husband had pushed her.
Andre was charged with second-degree murder but was acquitted of all charges 3-years later.

Love can be Temporary… 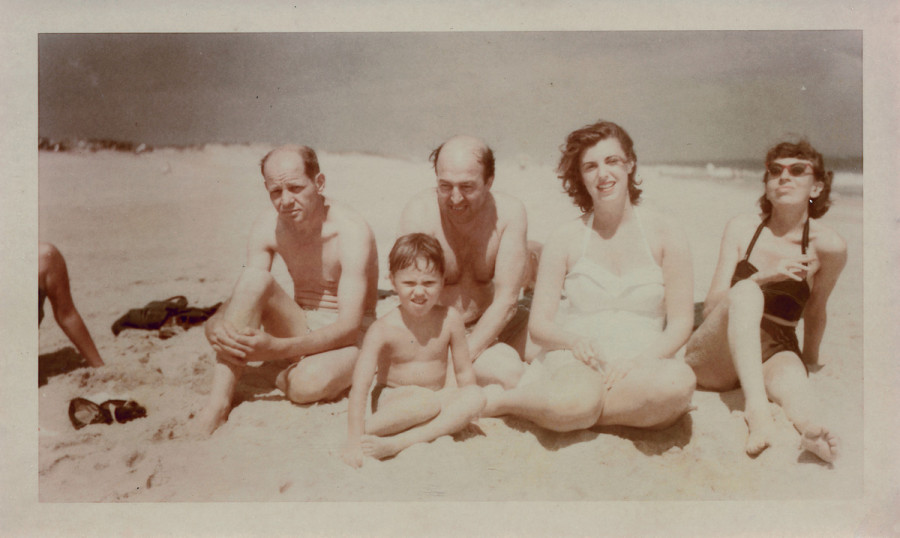 Love can be Unequal… 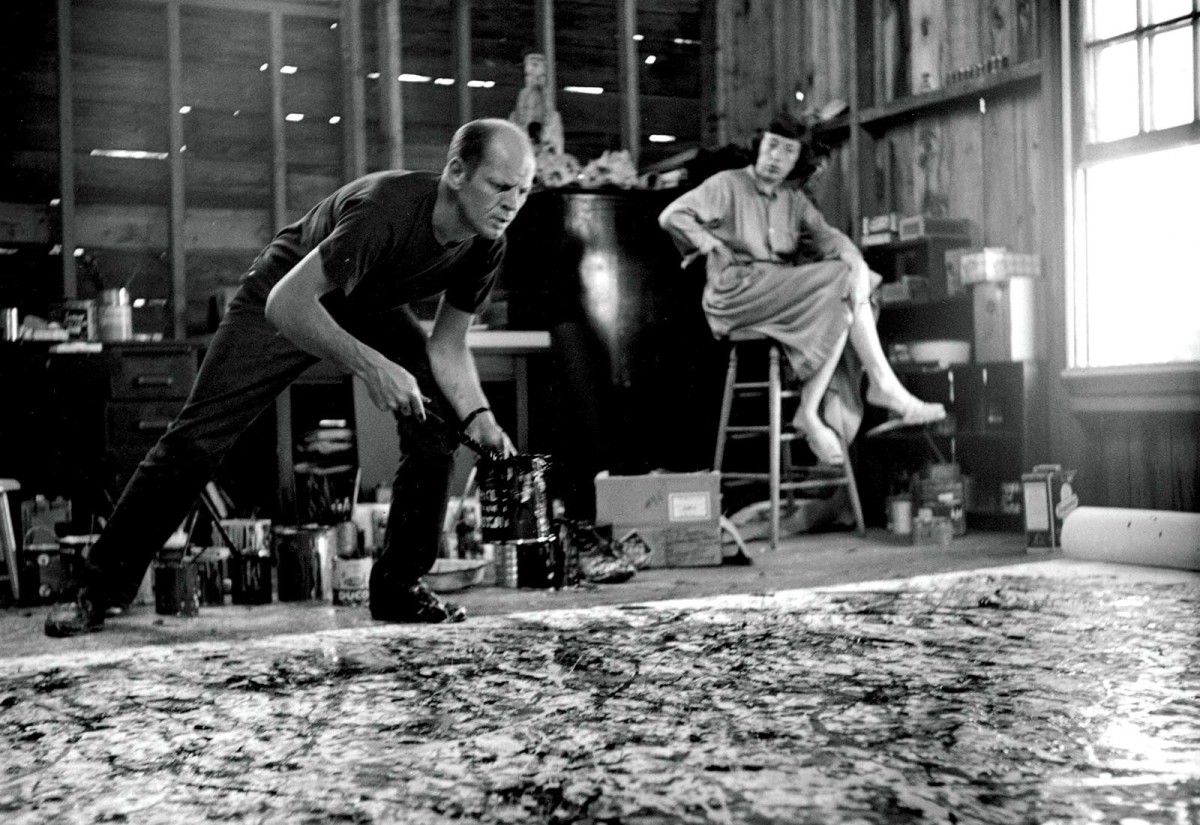 Image via The New Orleans Museum of Art
Jackson Pollock: Painter
Lee Krasner: Painter
Jackson Pollock and Lee Krasner were both operating within the AbEx movement at the same time when they met in 1942. The two emerging artists developed a relationship after exhibiting their works at the same gallery in New York.
During their careers, Pollock took center stage with his large scale action paintings. It wasn’t until after Pollock’s death that Krasner gained more recognition. She moved into her deceased husband’s studio/barn and began to make paintings in proportions similar to Pollock’s iconic works.

Love is an Attraction… 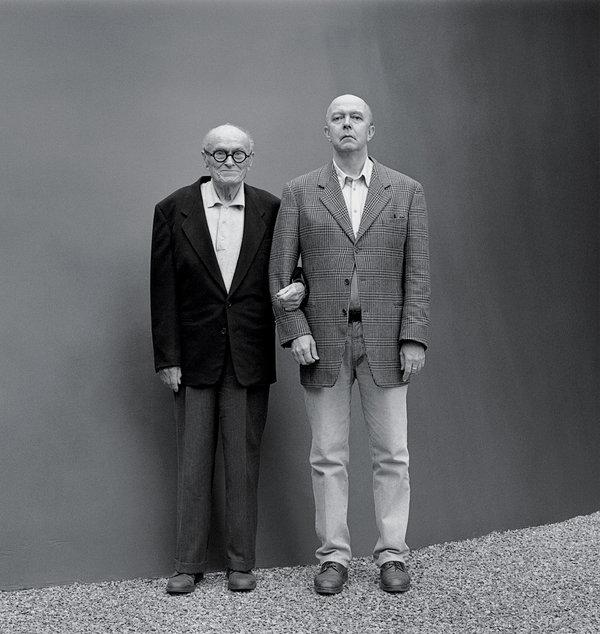 Image via The New York Times
Philip Johnson: Architect
David Whitney: Art Curator
Philip Johnson and David Whitney’s  “Hot for Teacher” tale began at the Rhode Island School for Design. Whitney, a student at the time, boldly requested a tour of the acclaimed architect’s home – the Glass House (1949) –  in New Canaan, Connecticut. They lived an intimate life together in their see-through, countryside retreat for the next 45 years and died 5 months apart. 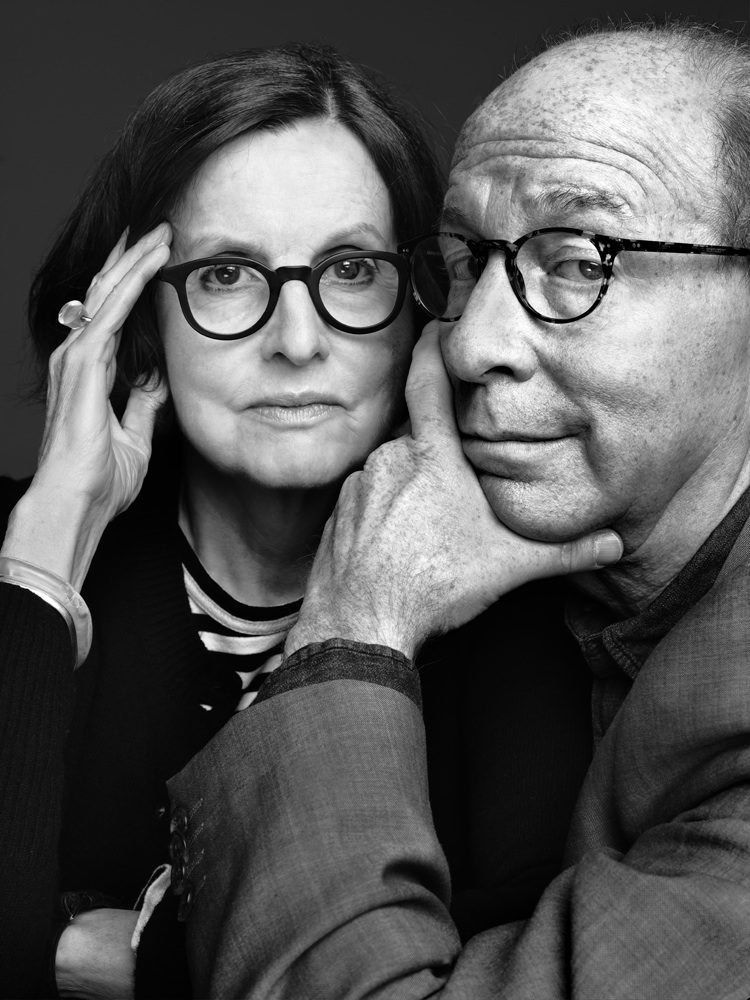 Love can be Egotistical… 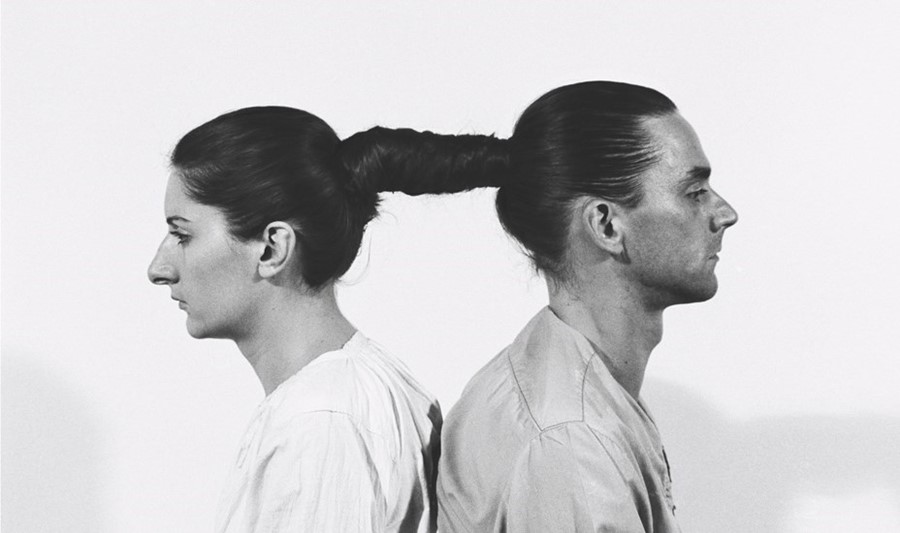 Image via Dazed
Marina Abramović: Performance Artist
Ulay: Performance Artist
The story of Marina Abramović and Ulay is one for the ages. The performance art pair met in the mid, late-1970s and began a passionate bond as lovers and collaborators. Abramović and Ulay are like the Bonnie and Clyde of performance art. They traveled the world together for several years pushing the boundaries of physical art, vulnerability, and trust.
Their extreme performance pieces included acts like continuously slapping each other in the face, tying each other’s hair together, and screaming into each other’s faces. The most anxiety-inducing is, The Other: Rest Energy (1980), which sees Ulay pointing a loaded bow and arrow directly at Abramović’s heart. Gotta say the whole things lacks the charm of Cupid’s instrument of love. 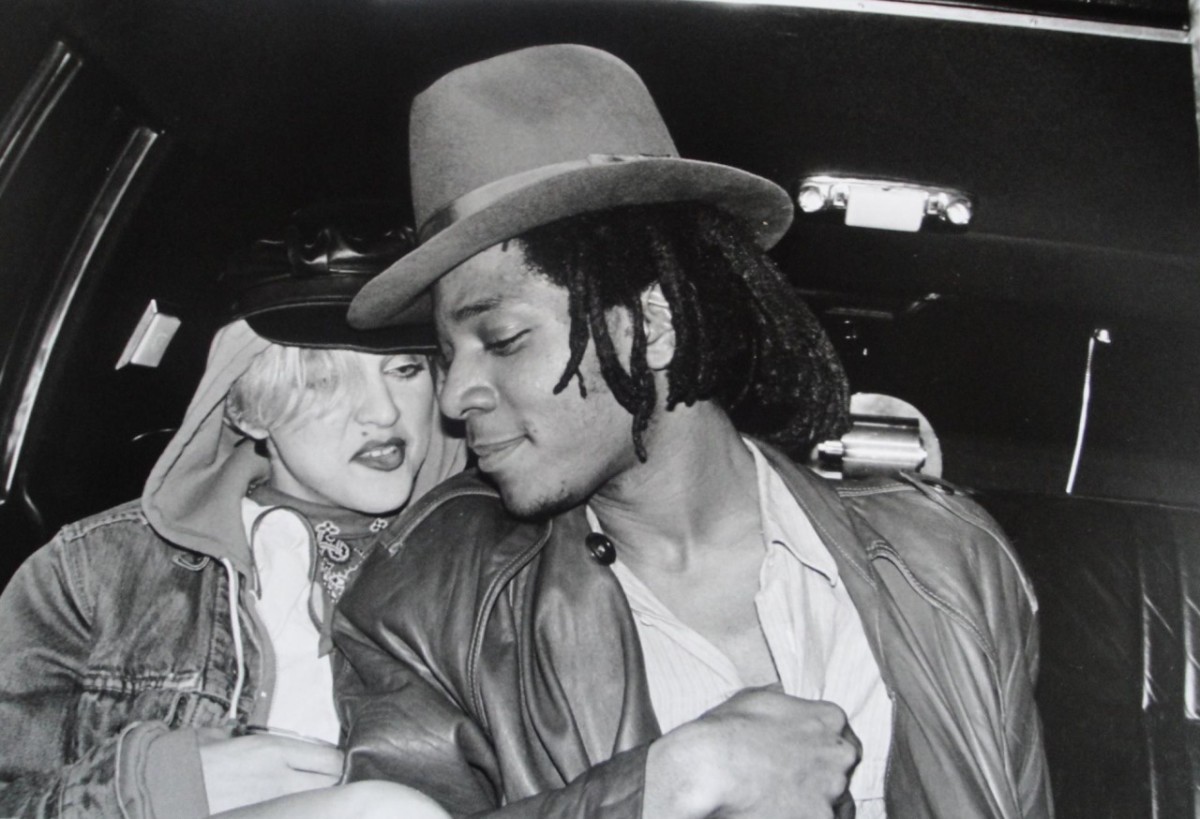 Image via Tumblr
Basquiat: Painter/Graffiti Artist
Madonna: Musician
Basquiat and Madonna were uncontested rulers of the 1980s Pop Culture sphere. However, the “Like a Virgin,” songstress had yet to sweep the airwaves when she and Basquiat dated. Basquiat was rather clairvoyant and saw Madonna’s potential. The artist told Larry Gagosian — one of the world’s largest art dealers — his girlfriend was going to be huge. 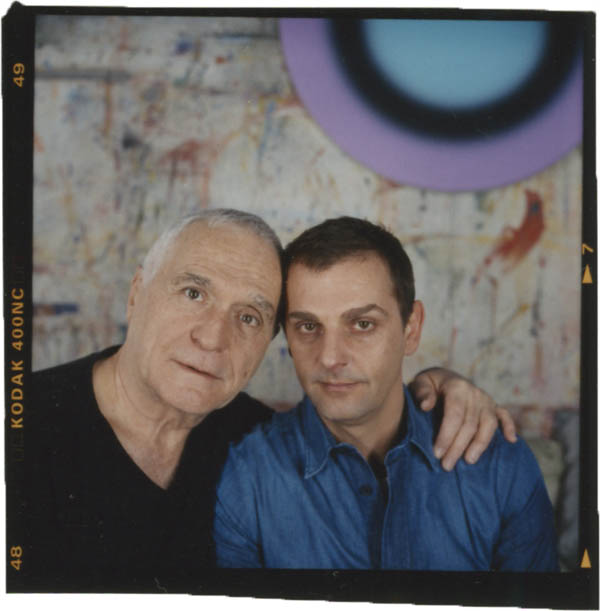 Image via The Brooklyn Rail
Ugo Rondinone: Multimedia Artist
John Giorno: Poet/Performance Artist
Ugo Rodinone met his lover John Giorno in 1997 when he asked the well-established poet to participate in one of his exhibitions/installations. The two drank and smoked far too much one evening and became intoxicated in every sense of the word. They continue to collaborate and celebrate each other’s work.
In 2017, Rodinone put together the first retrospective of his partner’s collection of poetry titled:  UGO RONDINONE : I ♥ JOHN GIORNO  – if that isn’t a clear as day expression of love, I don’t know what is. 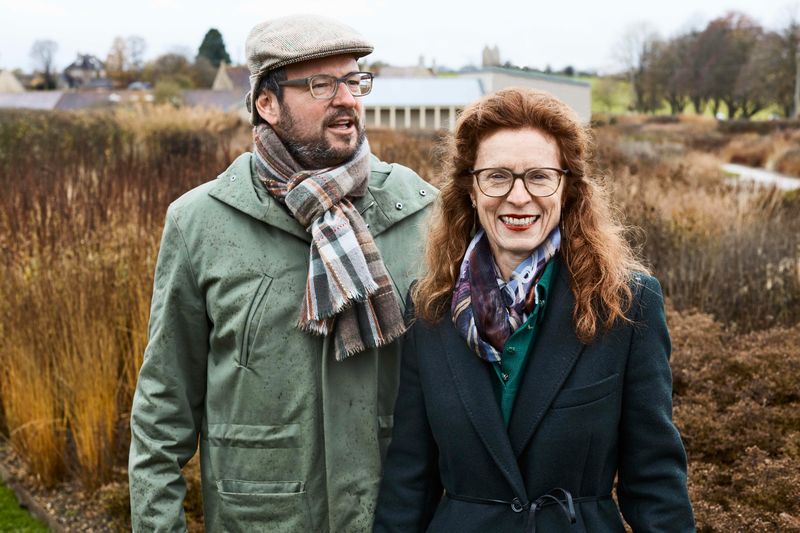 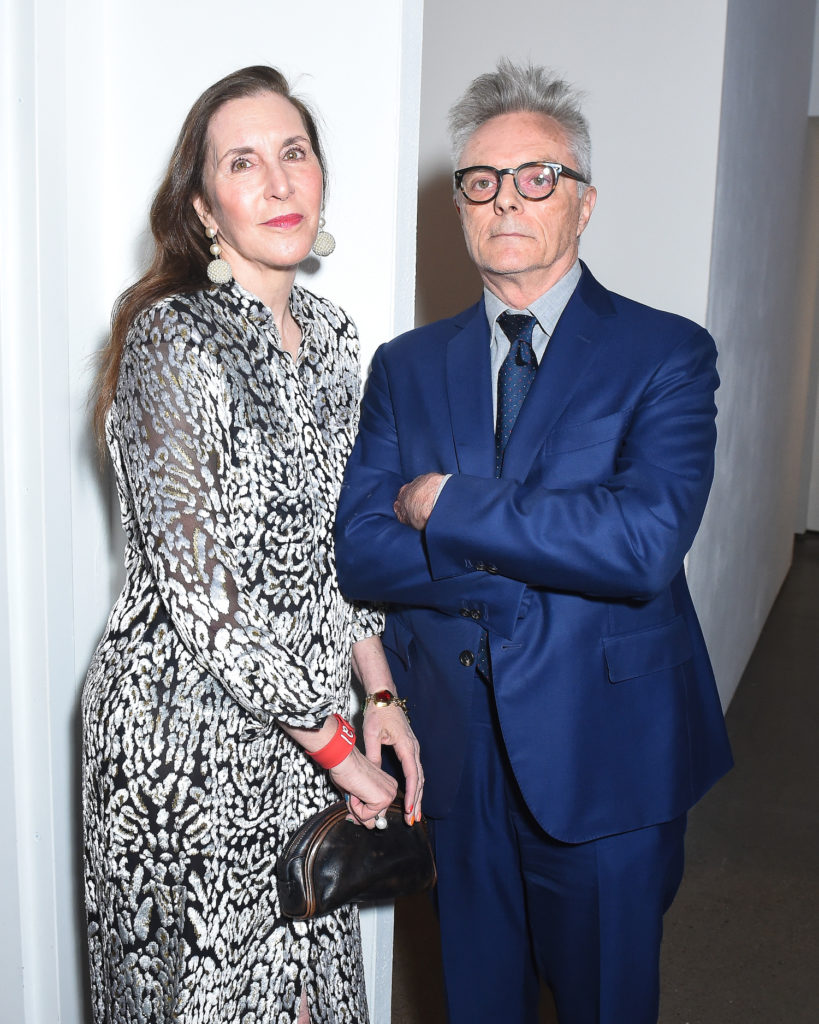 Image via ArtNet
Laurie Simmons: Photographer
Carroll Dunham: Painter
Laurie Simmons and Carroll Dunham, are known both artistic contributions to the world and for being the parents of Girls creator, Lena Dunham. Though they don’t collaborate – per se – Simmons has cheekily said in the past that her husband often has a habit of “copying,” her work.

Love is a Union… 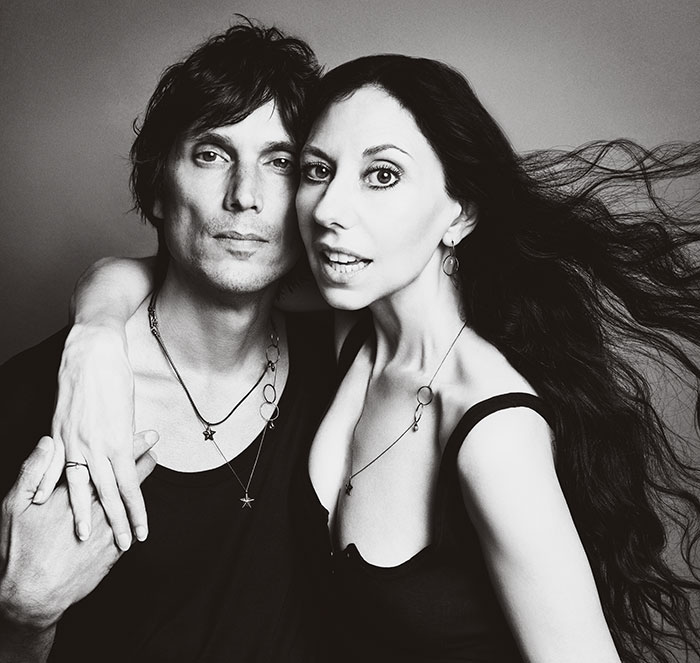 Image via Paper Magazine
Inez: Photographer
Vinoodh: Photographer
Inez van Lamsweerde and Vinoodh Matadin, known simply as ‘Inez & Vinoodh,’ are Dutch fashion photographers that have worked together since the early-1980s. They’ve shot covers for every luxury fashion and lifestyle magazine you can think of and have directed several music videos. The duo paired up to direct Lady Gaga’s, “Applause,” and the “FourFiveSeconds,” music video starring Paul McCartney, Rihanna, and Kanye West. 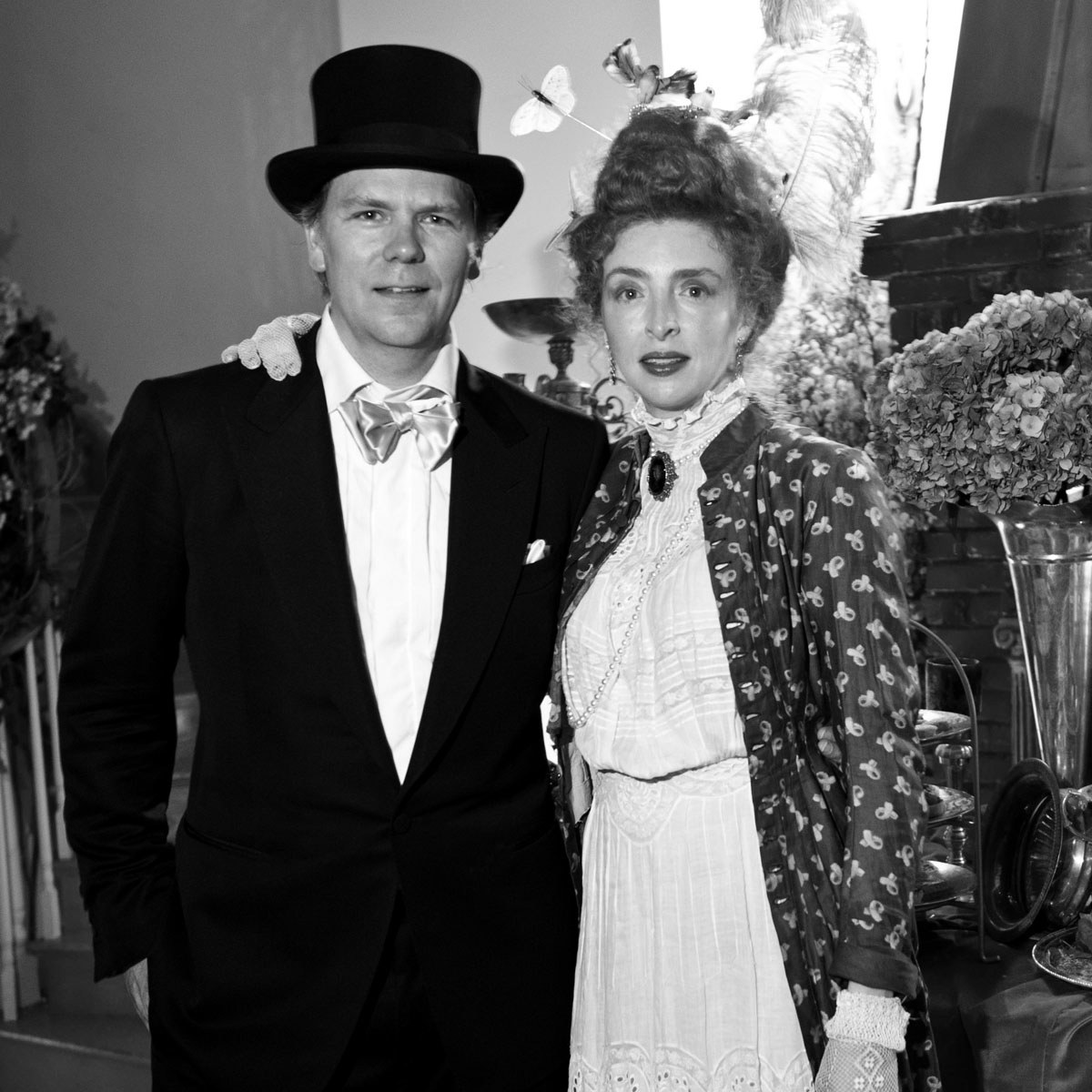 Image via Vogue
John Currin: Painter
Rachel Feinstein: Sculpture
This couple is celebrating their 22nd Anniversary this Valentine’s Day! Currin and Feinstein’s love affair is sort of a fairytale romance when you think about it. Well, it was sparked over a fairytale, anyway, when they met at Feinstein’s installation of Sleeping Beauty’s Gingerbread House sculpture in 1994. Feinstein frequently models for her husband’s modern mannerist portraits and it would appear that the two art still very much smitten. 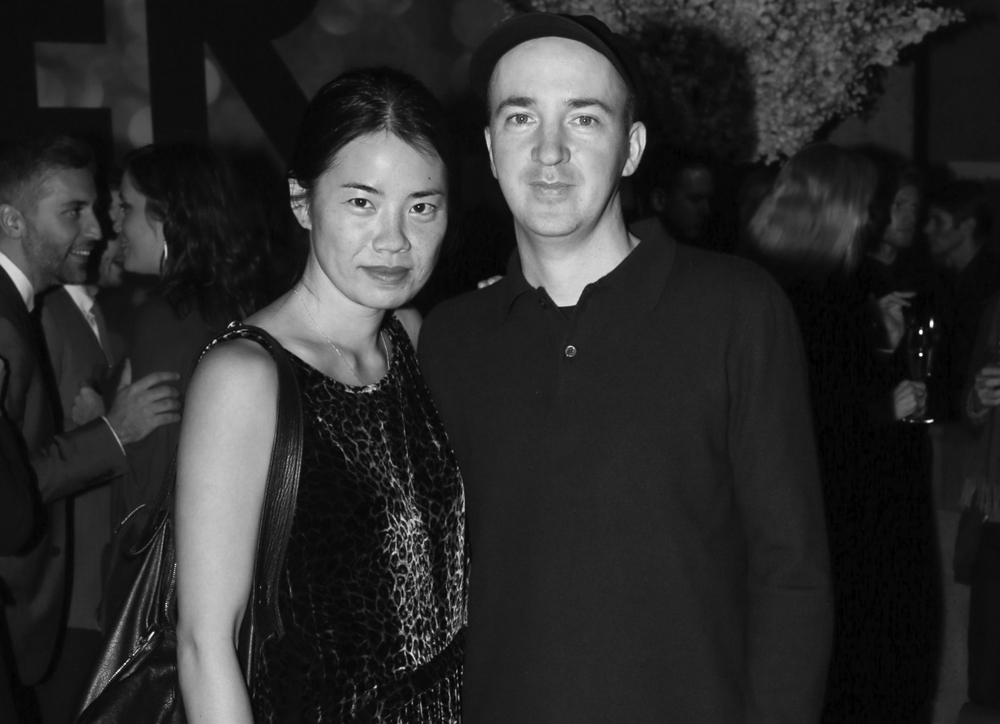 Image via Autre
KAWS: Multimedia/Graffiti Artist
Julia Chiang: Multimedia Artist
It wasn’t “love at first sight” with multimedia artists Brian Donnelly and Julia Chiang. No, in fact, Chiang thought Donnelly, the Brooklyn-based artist known simply as KAWS, was a jerk when they first met. Remember though, “Love is patient, love is kind,” and the two pair up after mutual break-ups around the same time. KAWS has said the secret to a perfect Valentine’s Day with Chiang is buying up as much heart-shaped candy as he can carry.
Happy Valentine’s Day! <3