With summer flings scheduled to soon hit their expiration date and each day sliding us closer towards cuffing season, the anatomy of a couple could not be a more timely discussion. What exactly are the prerequisites for becoming a couple, and harder still, a good couple? Is compatibility the key, or friendship, or chemistry?—and don’t even get me started on whether it’s possible to have all three.

Whether you’ve been coupled up for years, are single as a Pringle or, like so many other poor, confused souls, are stuck agonizing in that purgatory of “are we or aren’t we?”. As the leaves turn red, allow this wisdom from masters old and new to guide you. Behold the best and worst couples in art history, a visual guide to the most aspirational of romances… and the ones that make you want to cancel all your Hinge dates and never leave the house again. 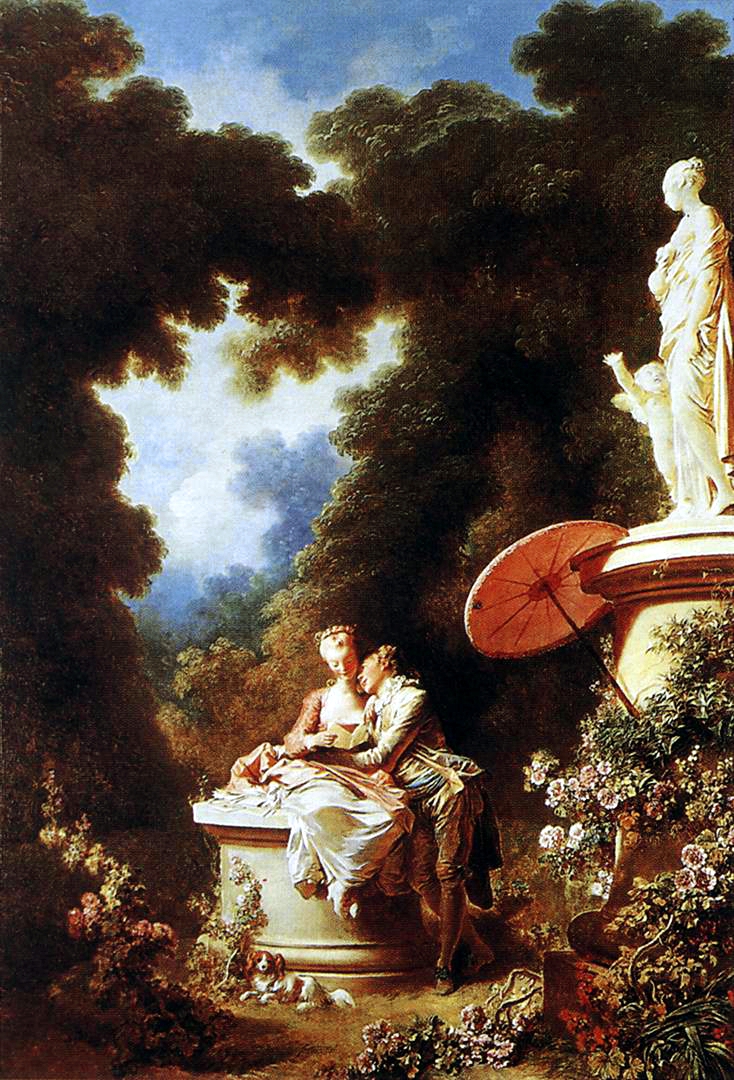 Owning up to feelings has probably been a terrifying prospect even before the age of ghosting, commitment phobia and endless swiping, but you wouldn’t know it from classical paintings. This fall, if you’re feeling in it for the long haul, take a leaf out of Fragonard’s book (ahem, canvas), gather up some courage, and when you finally confess your love, be sure to pick a suitably romantic backdrop. Don’t even think about having “the talk” over Netflix and chill while your roommate grills a quesadilla in the next room or you’ll make this rococo master turn over in his Montmartre grave. 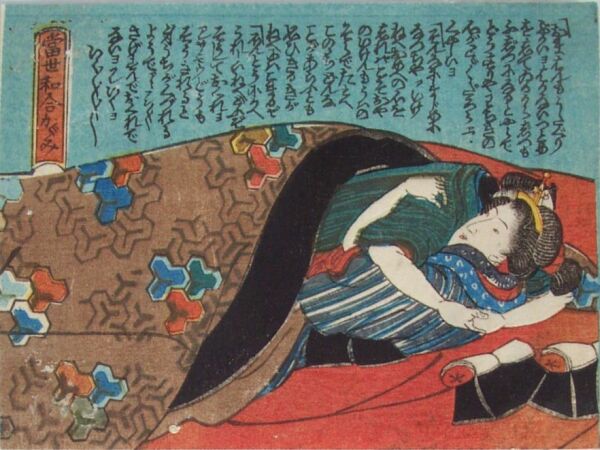 Though Kunisada’s The Book was a close runner-up (who doesn’t want a little literary love?), we had to turn over the spot to Under the Covers for depicting what is undeniably the most blissful of all couple activities: cuddling. These lovers look so cozy under their billowing blanket, warmth lent by the red backdrop, that I for one am dying to slip in next to them—but alas, three’s company. The message here? If your lover isn’t so irresistibly snuggly that your arms take on a mind of their own around them, somehow ending up wrapped around their waist without you having the slightest clue how they got there, even if it means losing feeling in your right arm and politely ignoring the rolling snore directly in your ear all night, then you could probably do better. After all, winter is coming—choose your cuffing buddy wisely. 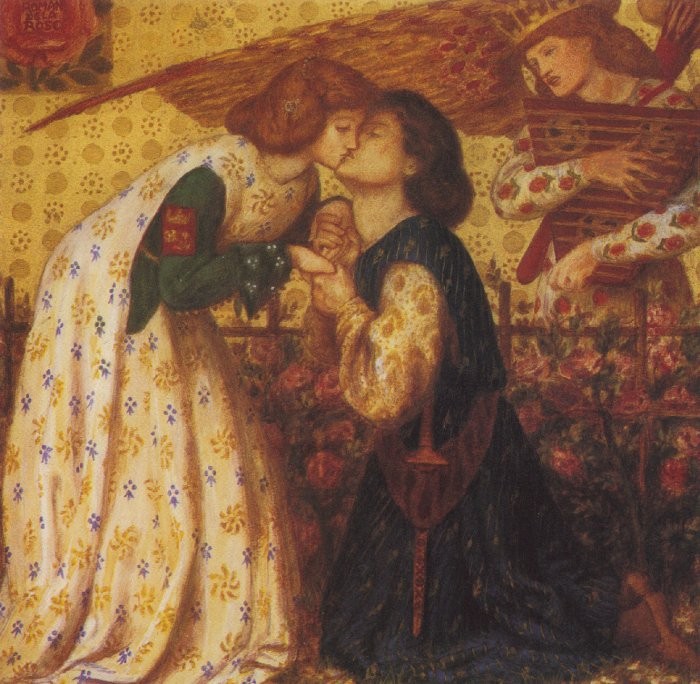 Same-sex couples are hard to come by in traditional paintings, but Rossetti stole our hearts with his tender depiction of a kiss between two young women. A tribute to the French medieval allegorical dream vision poem of the same name, Roman de la Rose uses flowers to celebrate female sexuality, something we can obviously get behind. Take it as a subtle reminder that a good partner, no matter which gender, will make your needs a priority and make you fall asleep to angels singing. 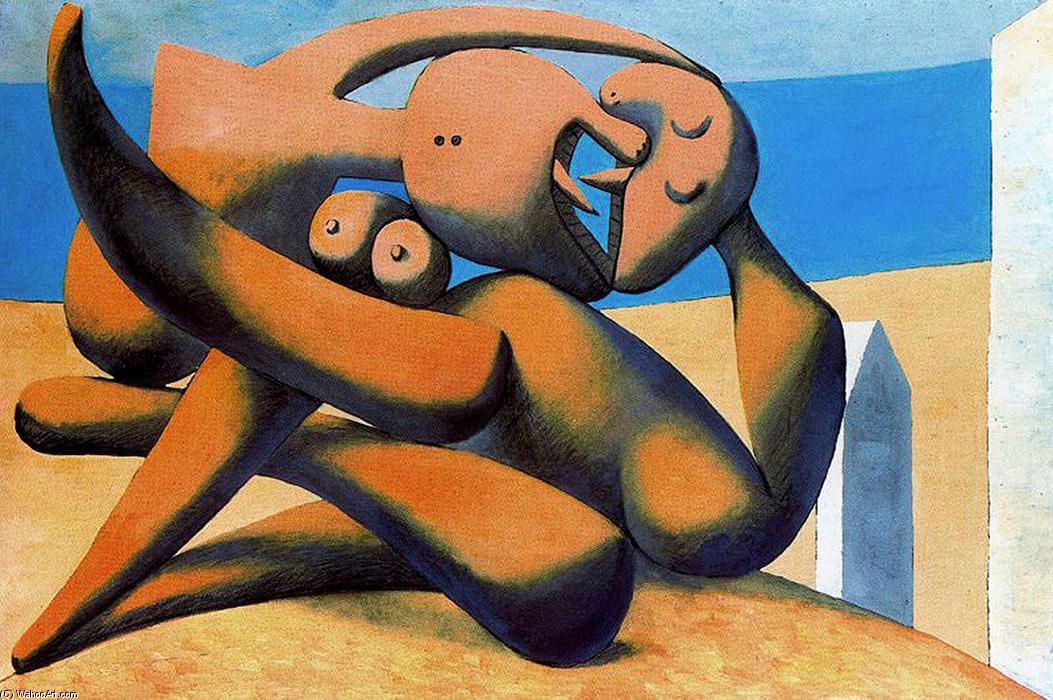 As a tribute to the summer fling, we’re throwing in this piece from Picasso’s surrealist period of a well-baked pair soaking up that Mediterranean sunshine, basking in the golden glow without a care in the world as they tangle themselves up in each other’s arms, legs and tongues. If that’s not summer lovin’ goals, I don’t know what is. 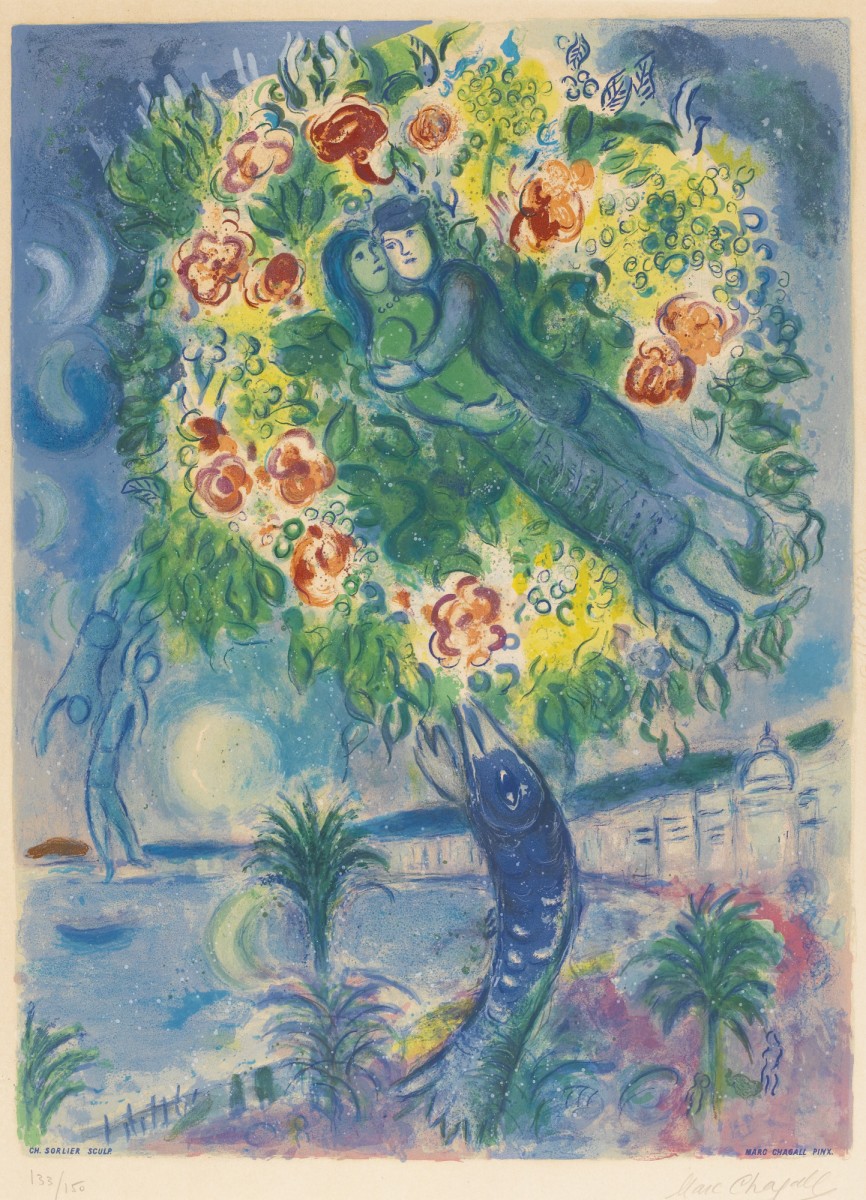 Active through 1985, Chagall may not exactly qualify as an “old” master, but the man definitely was an old soul and a raging romantic. An aura of loving fantasy permeates all of his multi-colored canvases, including one of the best kisses in art history, The Birthday. This one, however, won our hearts (and a spot on this list) with a touching if simple metaphor: this couple’s love has them floating in the clouds as flowers bloom all around them. Chagall captured the quiet euphoria of the early stages of love so perfectly that we have to wonder why anyone since has even bothered to try.
And now, some striking examples of what to never, ever, ever do: 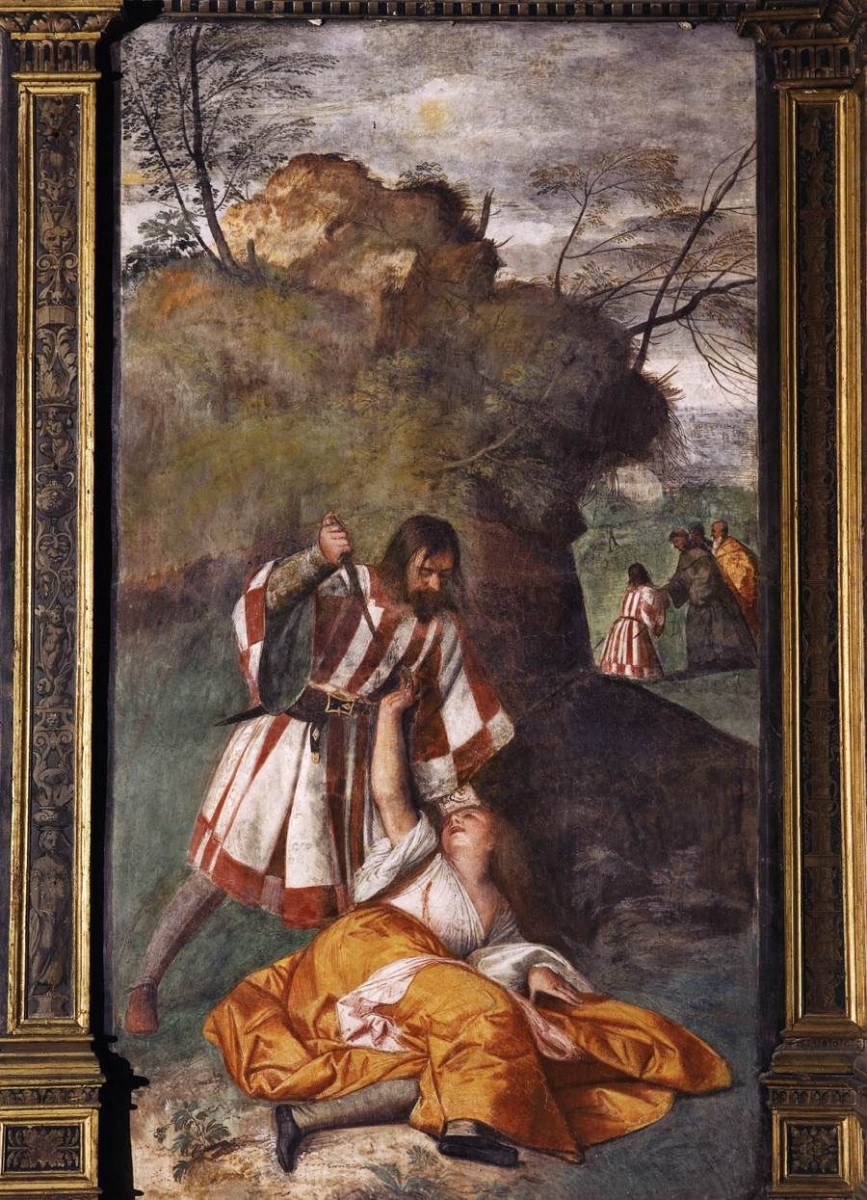 The holy grail of relationship what-not-to-dos might just be stabbing your partner, out of jealousy or otherwise. The “miracle” in question here is that a man stabs his wife to death after she is accused of adultery, and when he finds out she was, in fact, innocent, he begs forgiveness and Saint Anthony resuscitates the woman. All’s well that ends well, I suppose, but in the future, why not try to get all the facts before jumping to conclusions? Or better yet, let’s just make it a rule of thumb that you just really shouldn’t stab your partner, whether they slept with all 30 of your siblings behind your back or are just loudly chewing a burrito while you’re trying to watch The Office. Use your words. 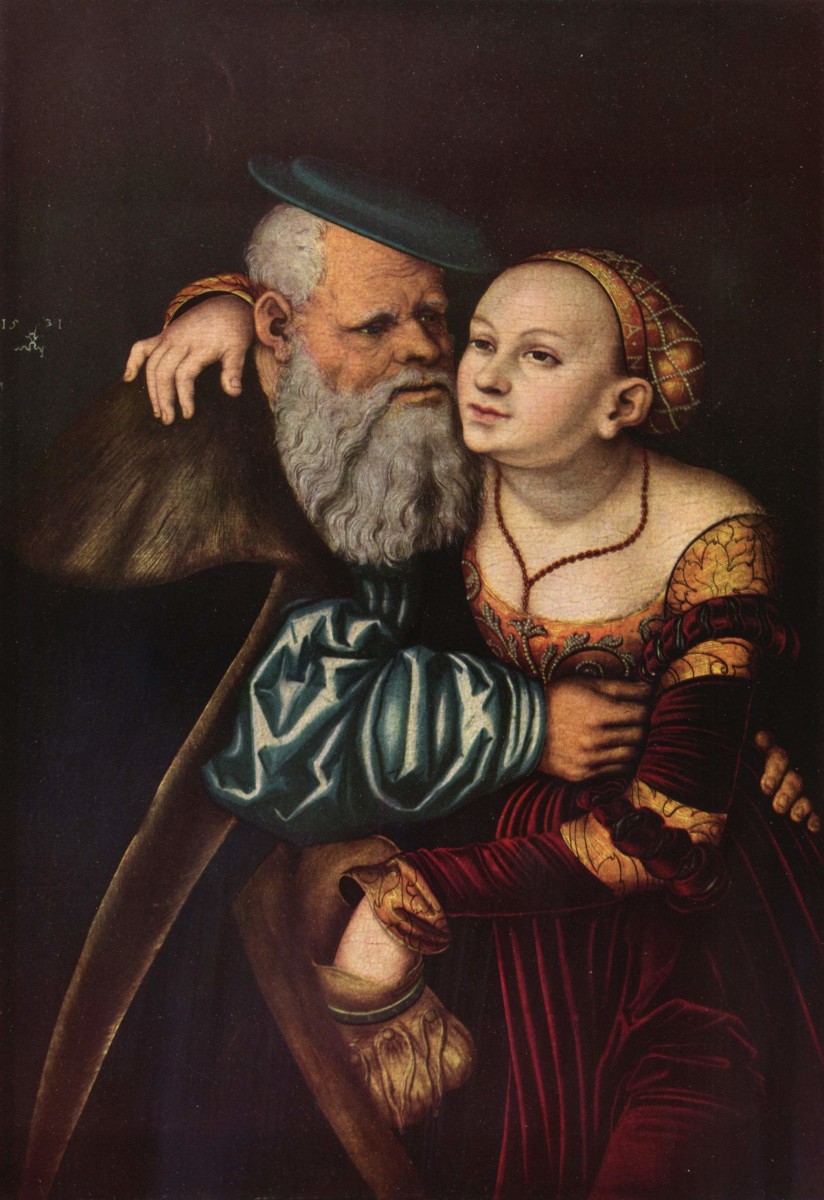 Gold digging is never a good luck, and neither is pedophilia. Unfortunately, we get strong whiffs of both in this Northern Renaissance portrait, featuring an old man, as per the title, reaching very suggestively in the direction of a young girl’s blouse. She, in turn, is staring off into the distance with the face of someone who’s never disassociated so hard in her life while her hand slithers into his purse. It might be a classical art meme waiting to happen, but it doesn’t take an art historian to decipher the situation here. Write this down, reader: fake and transactional relationships are never cute, even if they’re not as blatantly ghastly as this one. 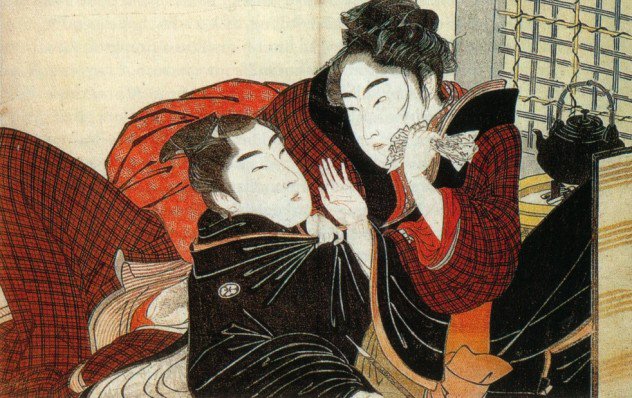 The second of twelve prints in a series of shunga pictures from the Edo period, this scene shows a young man’s older lover confronting him with a letter she found in his robes. We can’t be sure what kind of treachery we’re witnessing here—Utamoro leaves few clues beyond the picture itself—but it’s safe to say that this love affair is on thin ice. 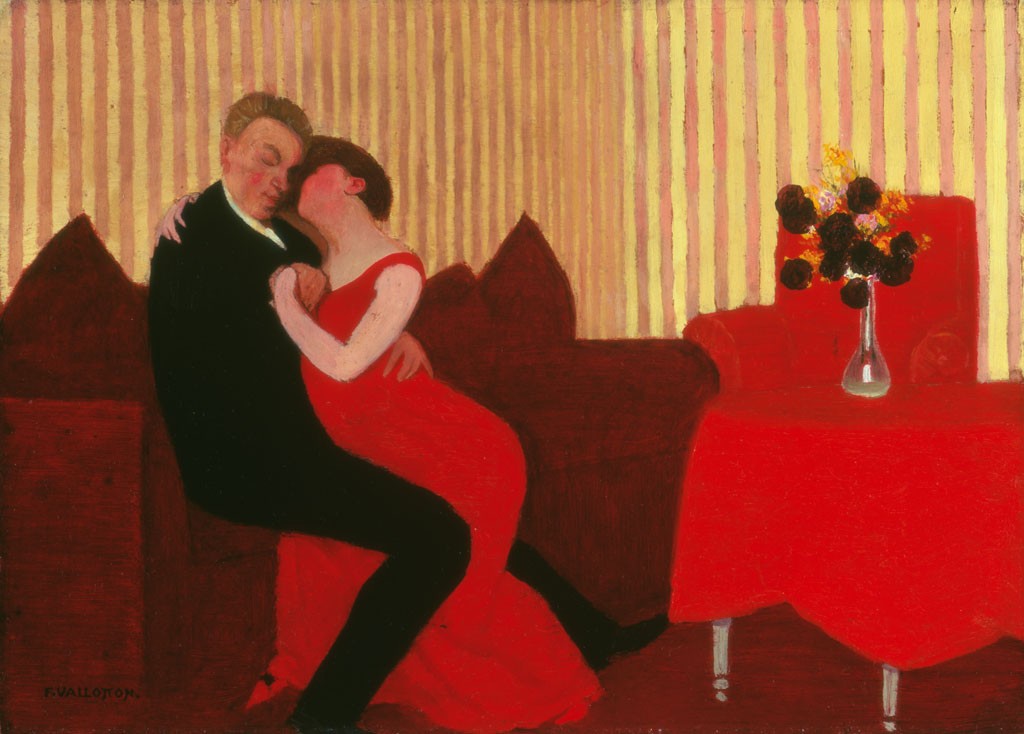 While at first glance the scene might look like it’s dripping with sensuality—all that plush red and rich yellow and you can practically hear the clinking champagne glasses—the title says otherwise. As soon as you read it, the scene turns garish, what seemed to be a tint of red-hot mystique now spelling danger. In short, trouble is brewing in bourgeois paradise, whether the hammer lands thirty seconds from now or thirty years. Let this be a lesson that a great love story never starts with a lie, because the second dishonesty enters into the mix marks the beginning of the end. 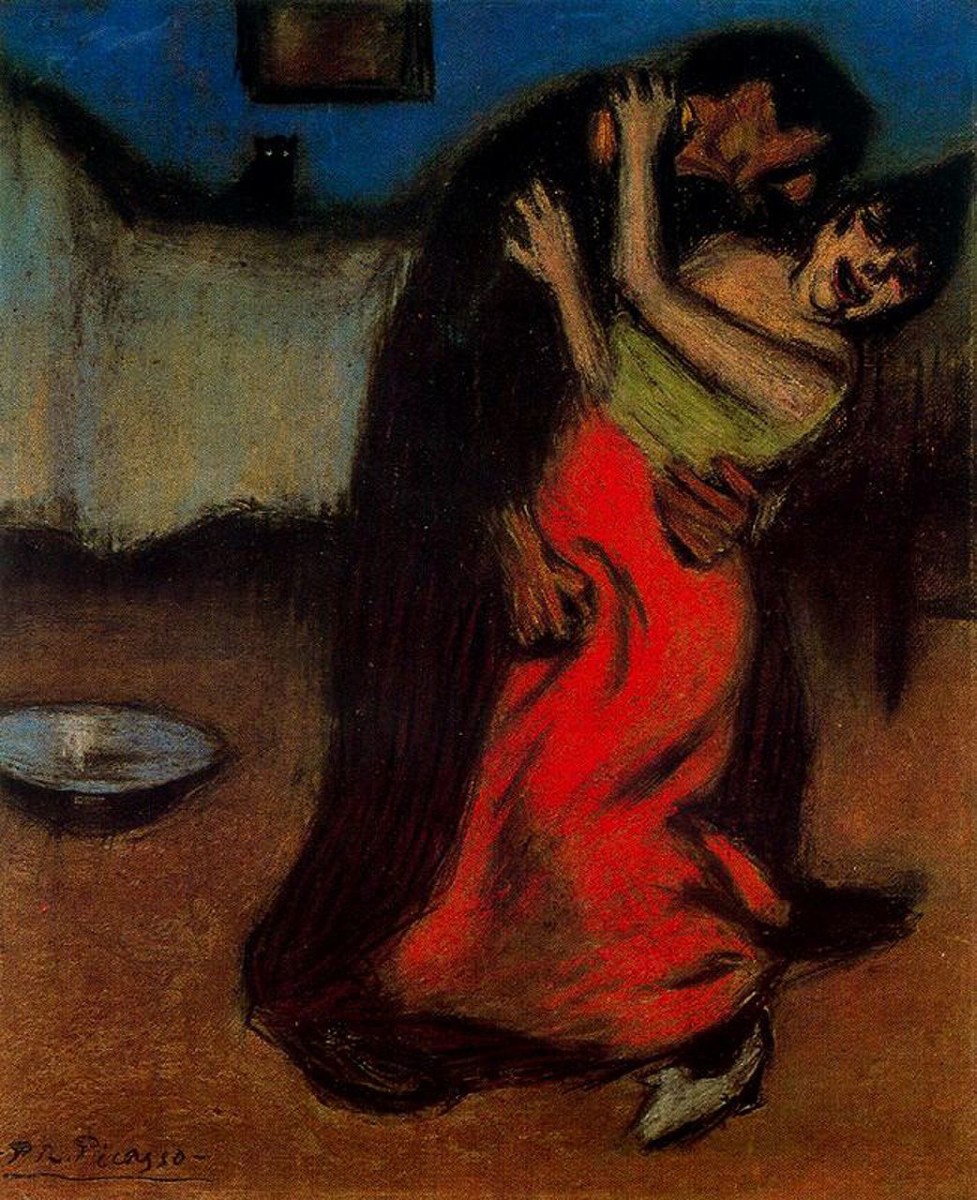 Unlike the glorified scenes of husbands stabbing wives and vice versa that abide in Renaissance and baroque painting, this scene is chilling precisely for its lack of allegorical airs. Its banality is what makes it really cut deep: this is not some mythical couple with grandiose excuses for their clashings; these are the neighbors you hear shouting downstairs and wonder uneasily when to intervene. Using a dark palette to obscure the features of the perpetrator who looms like an anonymous shadow, Picasso reminds us that violence has no face but dwells in many hearts. Sadly, this serves as a reminder that in addition to protecting your heart from fuckbois, you gotta look out for yourself in other ways. Always remember: if it hurts, it’s not love. 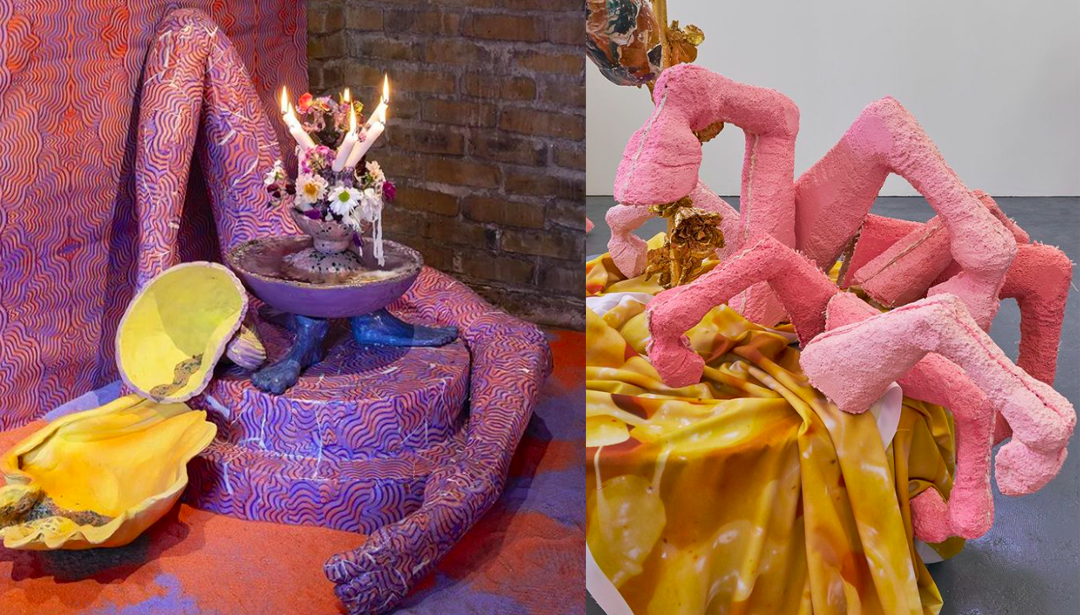 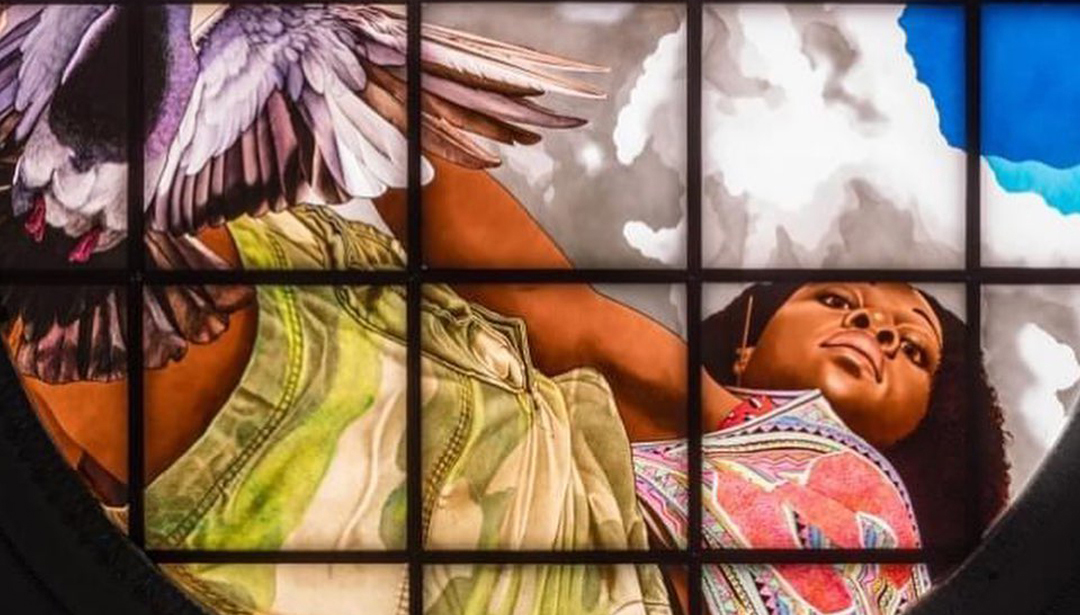