All the supermarkets started putting out the candy corn back in August, but Halloween somehow still managed to sneak up on you. One day you’re drying your bikini on the fire escape; the next, you’re bundled up in more cashmere than a very large sheep, scrambling to throw together a last-minute Halloween costume from your college “going out clothes” box.
Every year, you vow to start planning your costume earlier. Throwing on bunny ears and a tiny dress might have been cute when you were 18, but now it’s starting to feel a little awk to look like you’re straight outta Mean Girls when everyone around you is a Wes Anderson character.
But every year, October 30 still finds you costume-less and on the verge of a panic attack.
Never fear! We came up with some foolproof, last minute arty Halloween costumes so you don’t have to. With a little creativity (and a little digging in the dusty corners of your closet), you’ll be best dressed in no time. No more stress and best of all, no more wasting tons of money on overnight shipping. You’re welcome. 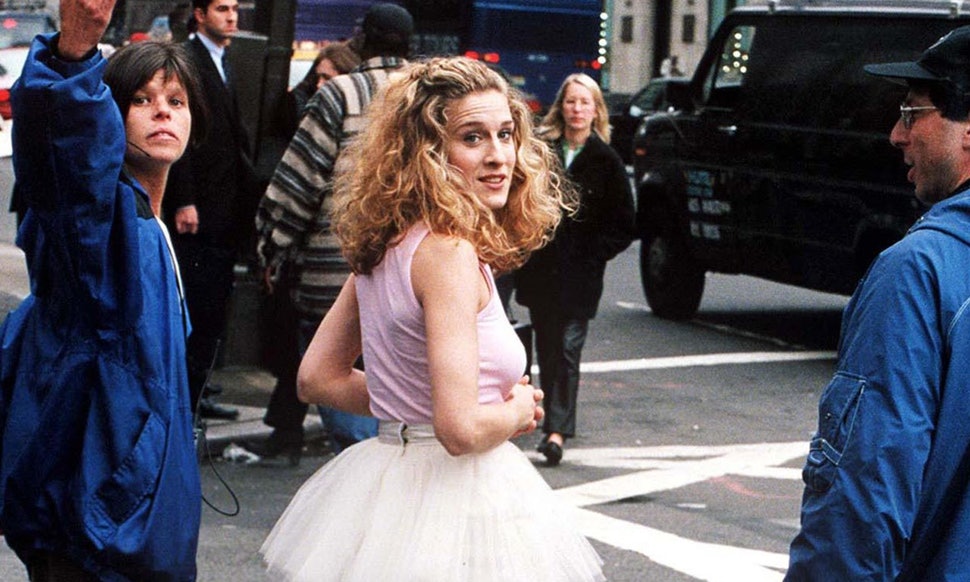 Obviously, no costume party would be complete without a little Sex and the City homage. Carrie might not be the gallerina of the posse, but she always channels art world chic from head to toe, which makes her an art world Halloween costume staple. Also, let’s be real, no one will recognize your Charlotte costume.
For a classic take, go for Carrie’s iconic intro outfit, the one where she manages to glamorize nips, tutus, and even getting splashed by a bus (the least chic of all Manhattan activities) in like, 20 seconds. Talk about impressive.
For the outfit, just dig up a pink ribbed tank from your Abercrombie phase (or wash a cheap white one with a red t-shirt). Hooray for DIY! For the bottoms, raid your ballerina friend’s (or little niece’s) closet for 3-4 tutus. Stack one on top of the other and voila, you recreated the iconic Carrie skirt. Polish it off with some foot-killing stilettos (don’t you wish someone had told Carrie about mules?). Since you can’t channel Carrie without the signature medusa mane, sleep in little baby braids the night before—or dig up your old crimper (it’s probably under that Abercrombie tank top).
Or, if you’re feeling suuuper inspired and also down to explain your costume to 3289487 people in one night, check out some of our other fav, more obscure Carrie looks, courtesy of @everyoutfitonsatc. 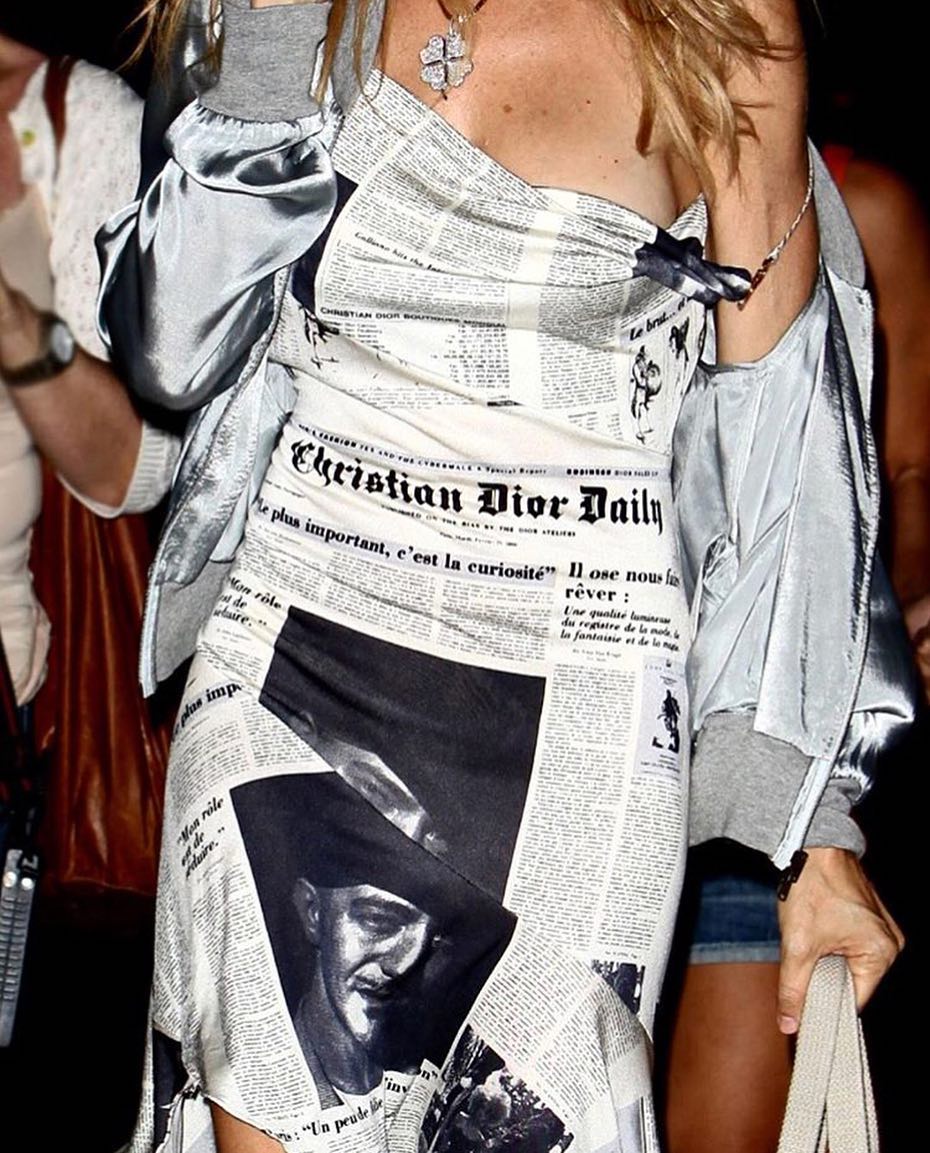 The John Galliano dress is instantly recognizable, to art and fashion people, at least, and actually easier to put together on the off chance you don’t have vintage Dior laying around. Just stick some old newspapers on a slip, and if you’re feeling crafty, glue on a “Christian Dior Daily” on the waistline. 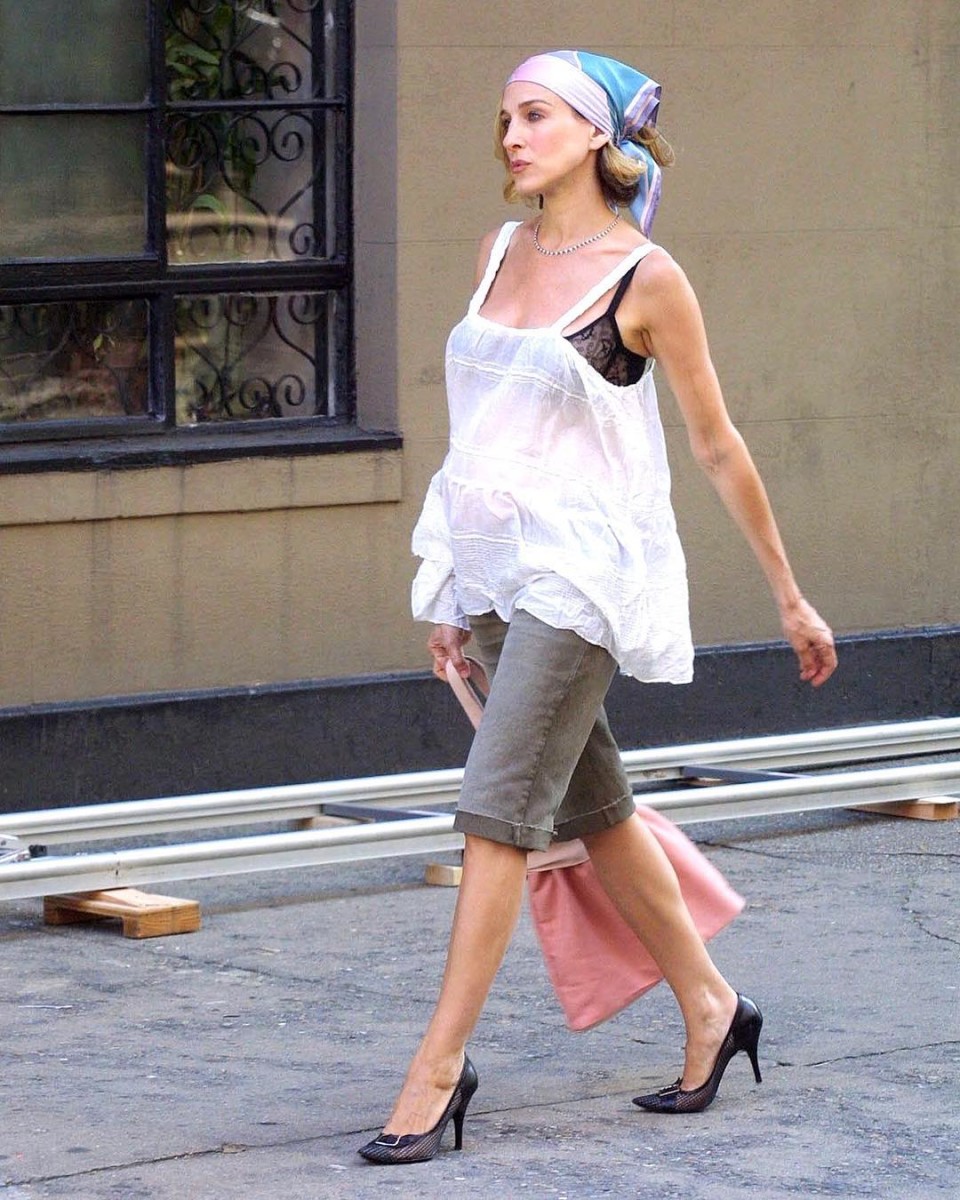 This outfit is a bit of an outlier, but it channels that frazzled, “been in the studio all day but I’m too creative and whimsical to remember mundane things like changing my outfit before heading out for a drink” vibe that we’re all about. Just be careful to play up the chic—the fancy lace bra and pumps are, unfortunately, crucial—or the vibe you’ll end up channeling will be more “pre-teen secretly putting on eyeliner during gym because her mom doesn’t let her.” And I know this because I was that pre-teen.
Chances are you already have all the pieces lying around the house: dark Bermuda shorts (cut some old green jeans if you need), a flowy white tank, a black lacy bra, black pumps, and of course, a silk scarf to tie around your head like a doo-rag.

The performance artist from SATC 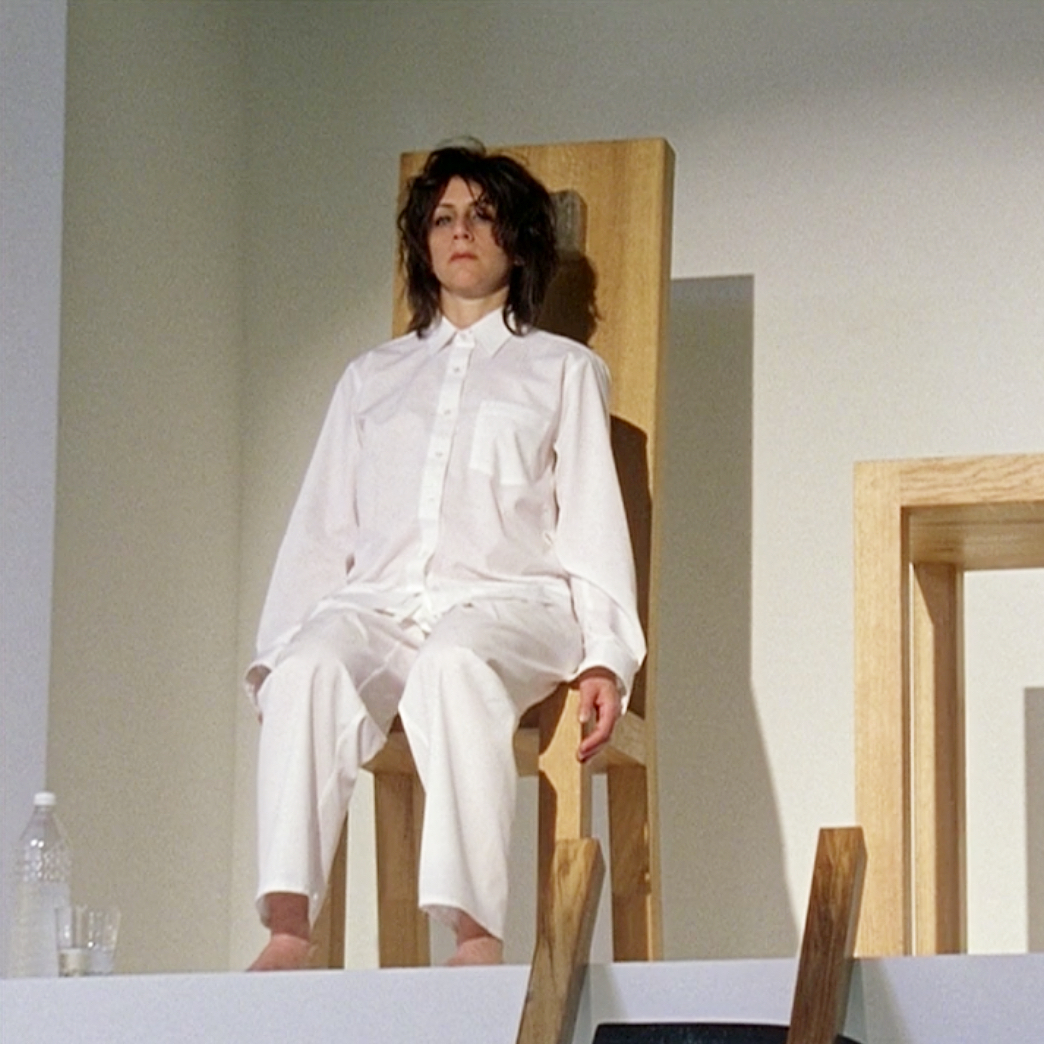 If you’re feelin’ the SATC vibes but not much of a Carrie (we get it, for all her iconic fashion, she has her truly insufferable moments), allow us to suggest an alternative. Remember when she dates the Russian artist in Season 6? It’s the only point in the show where she goes balls-deep (literally, ha) into the art world. I mean, they meet at a gallery opening and go back that night for their first date. Doesn’t get more art world cliché than that.
But it’s actually the performance artist, the one Carrie is so sure sneaks off to eat Big Macs every night, that would make the perfect last-minute arty Halloween costume. As @everyoutfitonsatc astutely caught, the dark-haired, austere, hunger-striking woman is obviously an homage to Marina Abramović. The costume is unexpected and original but also super distinct and recognizable, making it a win on all art world Halloween costume fronts.
All you need to pull it off is a white button-down, the most basic of all clothing items, white pants and a scowl. Downside being you kinda can’t talk to anyone or eat anything for full effect (as per the character’s performance art piece). But if you’re feeling a bit antisocial but still need to make an appearance, this could be a brilliant solution. 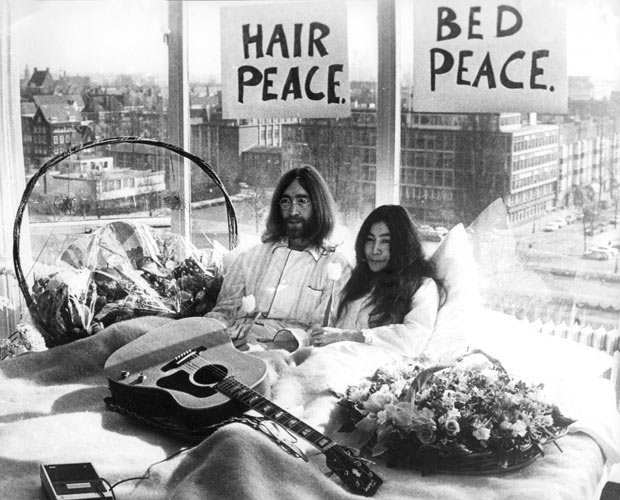 If you happen to have a spare dude on hand (preferably a long-haired one), John and Yoko will forever be the holy grail of arty couples costumes. Downside is that it’s a little basic, but actually, we love this duo for its subtle message of female empowerment.
First of all, Yoko totally wears the pants in the relationship. Apparently, when she first met John (at an art show!), she wasn’t super impressed by the joke he made, even though he was a famous rock star and she was still a relatively unknown avant-garde artist. Needless to say, he was hooked.
First everyone dismissed Yoko, then they hated her for breaking up the Beatles, and finally they were forced to accept her in all her witchy glory, which she totally embraces. Love that. Moral of the story, if you want people to take you seriously, you gotta channel “f*ck the haters” energy, and then no one will be able to ignore you. So bust out the Yoko costume this Halloween (or go solo—no John, no problem) to look super chic—and remind everyone that there’s nothing more attractive than a woman who is full of love but takes no shit. 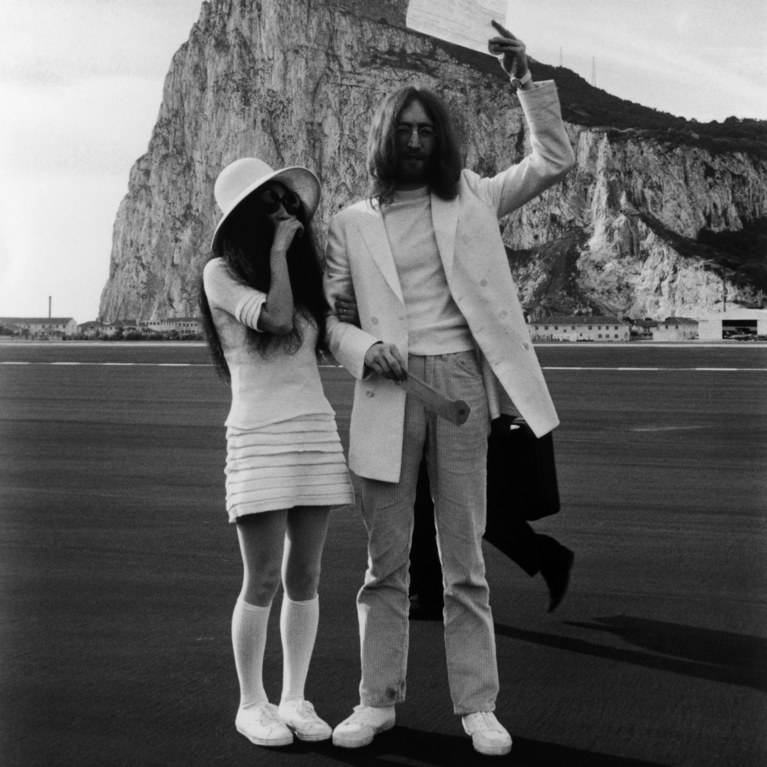 Ok, now as for the costume. You can go for the classic bed-in look, which is probably the easiest, but we also love John and Yoko’s wedding photoshoot look. If you have white knee socks, white sneakers, a white mini-dress or skirt and tshirt, and a wide-brimmed hat, you’re golden. 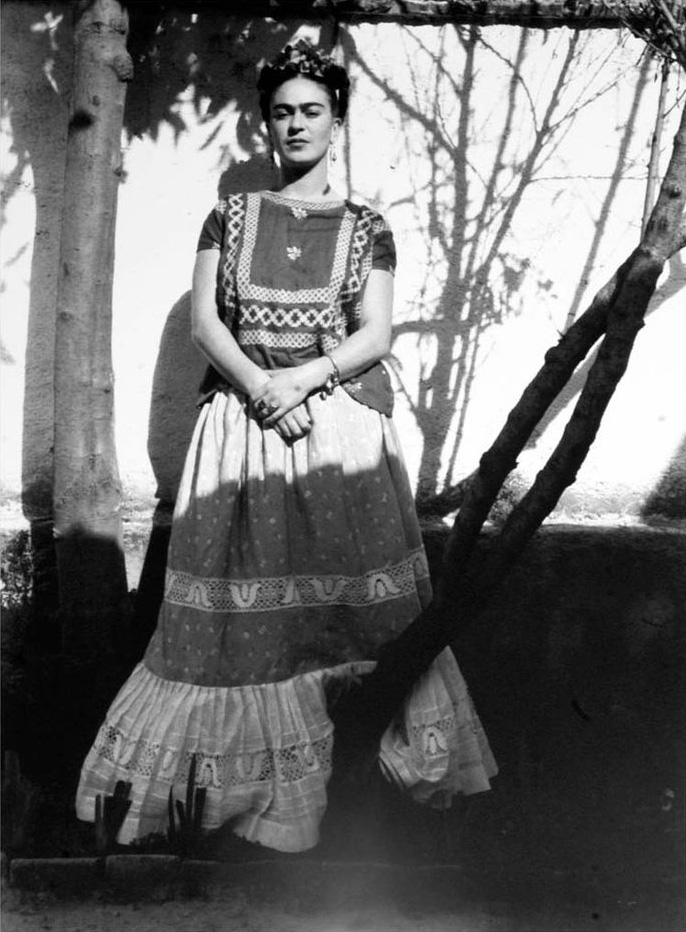 Okay, so the Frida Kahlo getup might be the slutty cat costume of the art world. Everyone and her gallerist has dressed up as the famous unibrow artist at one point or another, so you won’t exactly be winning points for originality. On the other hand, all you really need to do is draw on a unibrow (or don’t pluck yours that day), so if you’re truly scrambling, this is your best bet.
For a more elaborate costume, layer on some colorful dresses and scarves, twist your hair into a braid bun and top it all off with as many flowers as your neck can handle. If it was good enough for Beyoncé, it’s good enough for us. 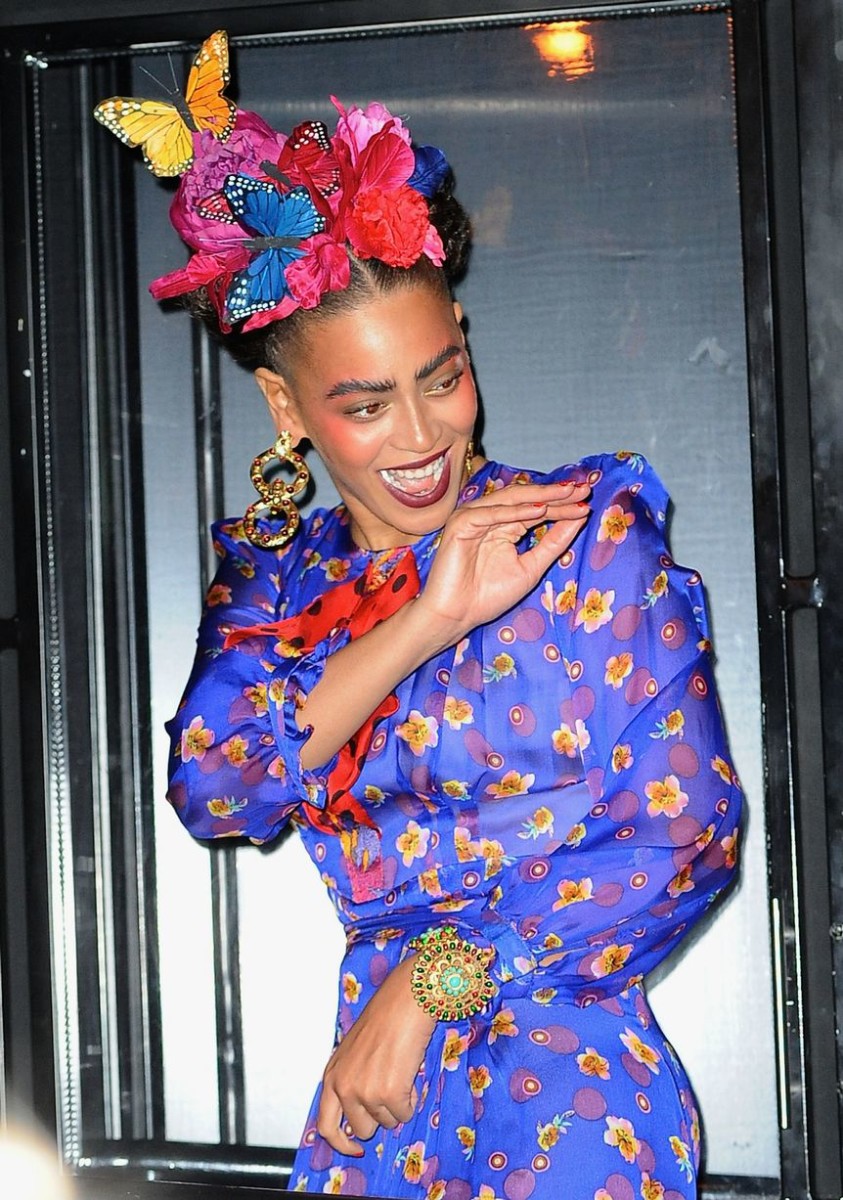 For a little IG inspo of different takes on the Frida look, check out this slideshow. 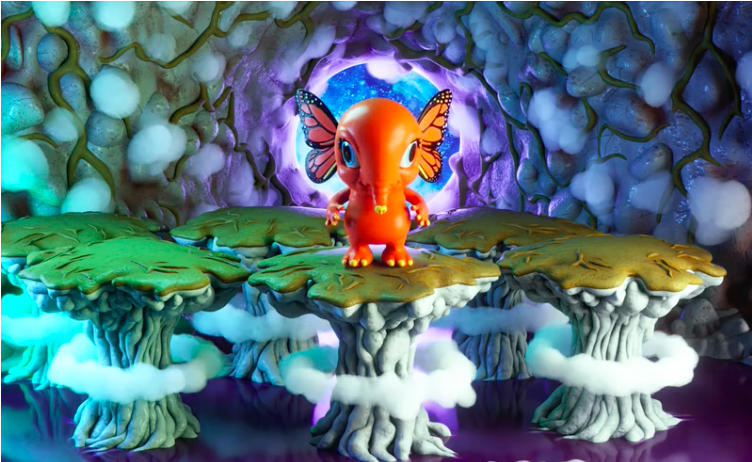