There’s a pervasive myth that pain and suffering is the only road to creativity. Think about the most visionary artists of the last century alone—Van Gogh, Frida Kahlo, Robert Mapplethorpe. In each of these cases, behind their art lies an avalanche of suffering. They created to keep from being buried. 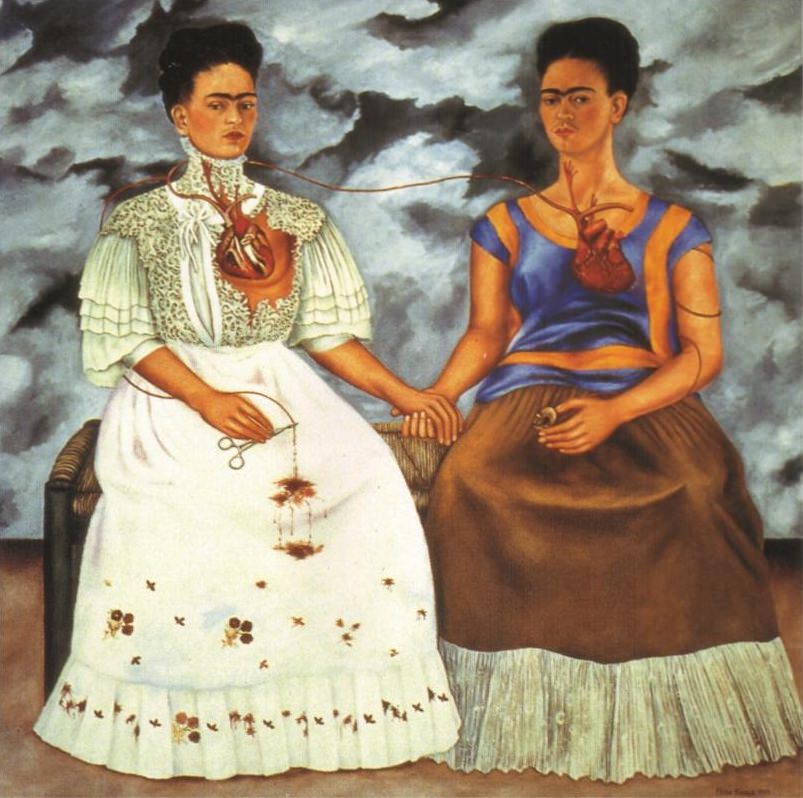 Frida Kahlo, The Two Fridas (1939).
The tortured artist isn’t a made-up construct. As these examples show, the struggle is very, very real, and there are countless more names where these came from.
But the tortured artist life isn’t the only way. Far from it. For starters, this belief that you have to be fucked up to create is both limiting and damaging to artists. Many feel scared to let go of destructive behavior because they don’t want to lose their spark, but this couldn’t be further from the truth.
Today, there’s a new paradigm coming through. First of all, society’s growing awareness of mental health means that people in general are more likely to seek help. There’s a smaller chance that behavior that points to alcoholism or depression would be brushed off with a breezy, “oh, they’re just an artist.”
More specifically, mindfulness is starting to trickle into to the art community. These worlds haven’t always been exactly separate; there’s a long history of artists going into nature to find serenity. Monet created his water lilies panoramas for the Orangerie Museum in Paris as a respite from hectic city life. Established after the Armistice after World War I, the two adjoined, egg-shaped rooms we’re Monet’s way to give “the illusion of an endless whole, a wave with no horizon and no shore.” Trippy.

Musée Orangerie in Paris.
But in past decades, at least since New Age movements exploded in the 60s, the dominant ethos of the art world has been more Studio 54 than yoga studio. Today, however, we’re starting to see a shift. While most of us still get our kicks from coffee, not kundalini, the worlds of mindfulness and art are converging in new and exciting ways. Just do a quick Google search for art and mindfulness and you’ll immediately have a huge range of information at your fingertips, from academic journal articles to news pieces by both conscious living sites and mainstream media, like The New York Times.
Many museums are starting to hold meditation mornings, like Quiet Mornings at MOCA Los Angeles and MoMA New York. The Rubin Museum of Art in New York also holds weekly meditations events guided by world-famous teacher Sharon Salzberg. The pairing is pretty intuitive—looking at art is already a meditative experience. And an art-filled life naturally forces reflection, concentration and self-examination, those key ingredients of mindfulness. 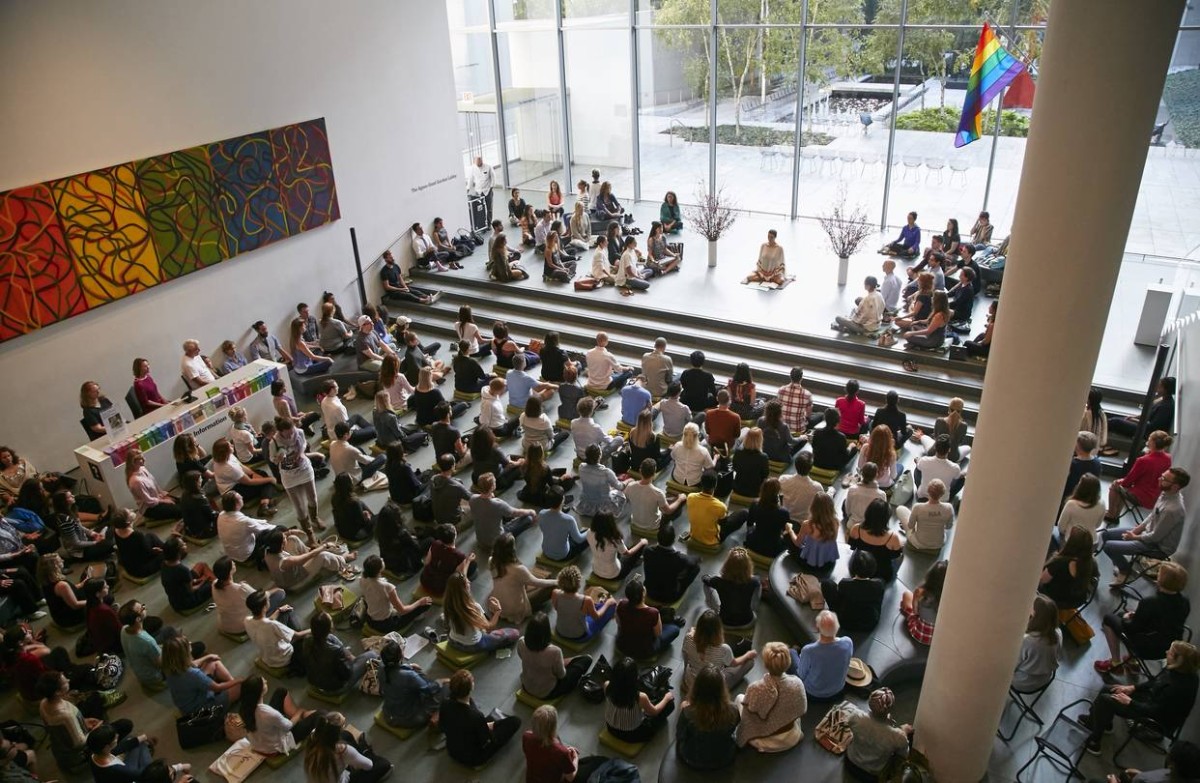 Quiet Mornings at MoMA.
There is also a new generation of badass artists and spiritual teachers working to being art into mindfulness and vice versa. Their battle cry? Art can be created from light, not just darkness. It’s a direct challenge to the reign of the tortured artist in our collective imagination. Meet five pioneers working to show us how to create art from a place of stillness and peace, not suffering and pain. 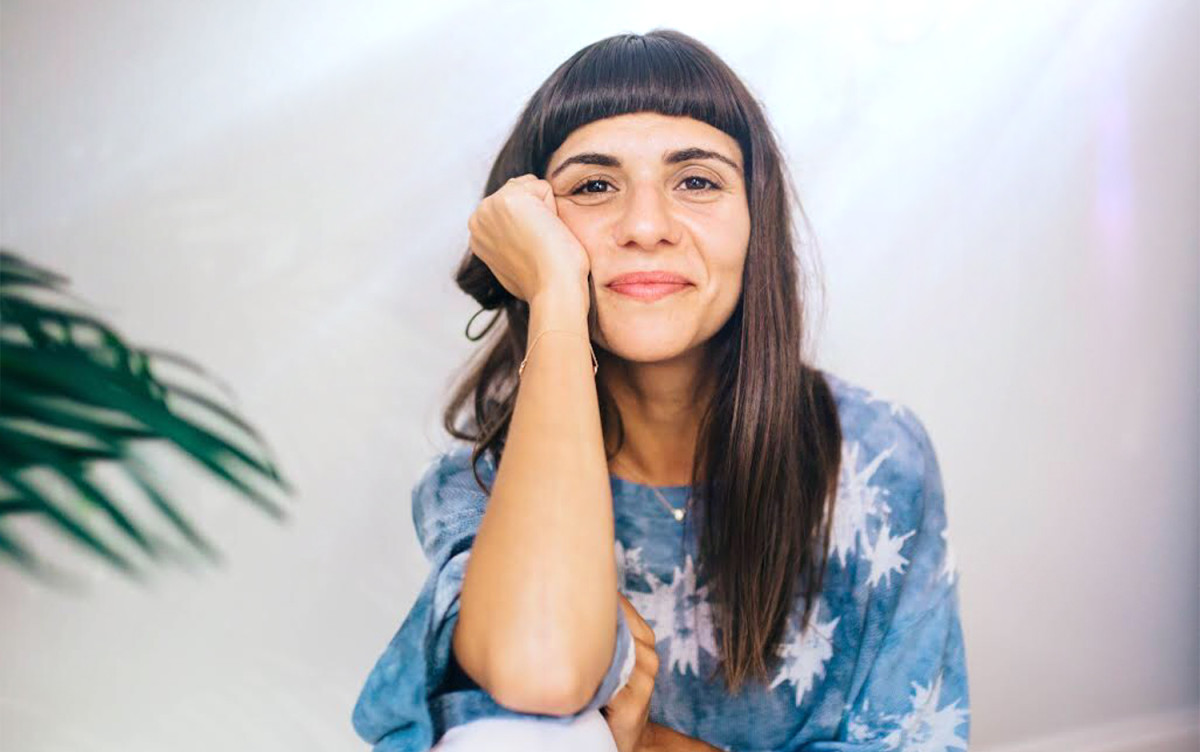 Biet Simkin thinks that the worlds of art and fashion and spirituality have a lot to learn from each other. Former starving artist, she herself has transcended the tortured artist trap and is teaching others how to do the same. Growing up with an awakened shaman for a dad, Simkin has been drinking the Kool-Aid of spiritual teachings from birth, but it took hitting rock bottom for her to create a life centered on these teachings. After the death of her father, she finally took stock of her life, got clean from drugs and launched her business. Once she began living the truth she had always known, she could begin sharing it with others.
These days, her life is very full: public speaking, hosting public meditation experiences, including at MoMA, wellness events for hospitality and luxury clients and private spiritual coaching. Not to mention Club Söda, “sober-curious” (read: alcohol-free) networking and nightlife events in NYC that she founded with mystical babe Ruby Warrington. In the past decade, she’s built this empire from scratch, all while managing to make a record, marry the man of her dreams and have a baby on the side. That’s what we call flow state. 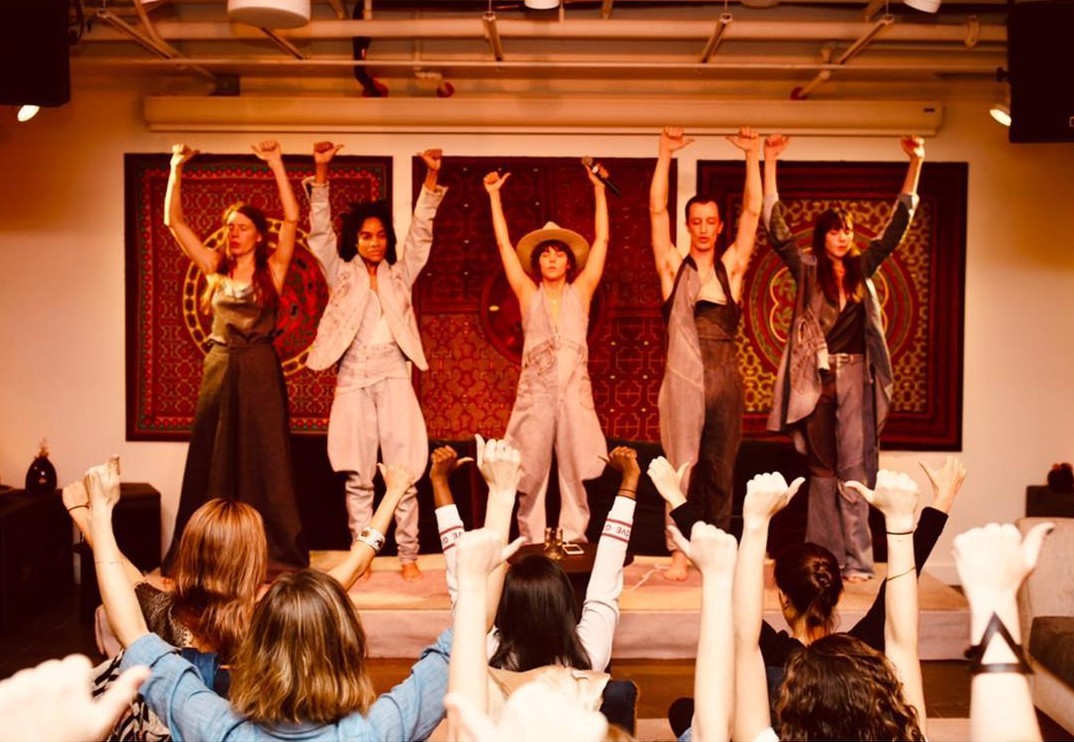 Meditation and fashion show courtesy of Guided by Biet.

Biet on Art and Mindfulness

Responding to whether mindfulness is vital for creativity, Simkin said, “It is. However, it is not the most obvious path. The most obvious path is hedonism and destruction. This is why so many artists burn out. They are right; that to create is to die. This dying, however, is not meant to be literal; it is a death to self, as described in the prayer of St. Frances. When we die to the fake self and are born to the true self that is the real and only act of creation.”
She also stresses the role of structure in the creative life. As many of us know all too well, the artists that lack routine and work ethic, the ones out partying every night, usually don’t end up creating that much art. Still, artists feel the push to “live the lifestyle”—otherwise, how will people even know that they’re artists?
Re: this pitfall, Simkin doesn’t beat around the bush: “This fear that we will not be interesting if we aren’t in a state of annihilation is total bullshit. We must awaken from the lies we tell ourselves if we are to be useful and effective.”
IG: @guidedbybiet 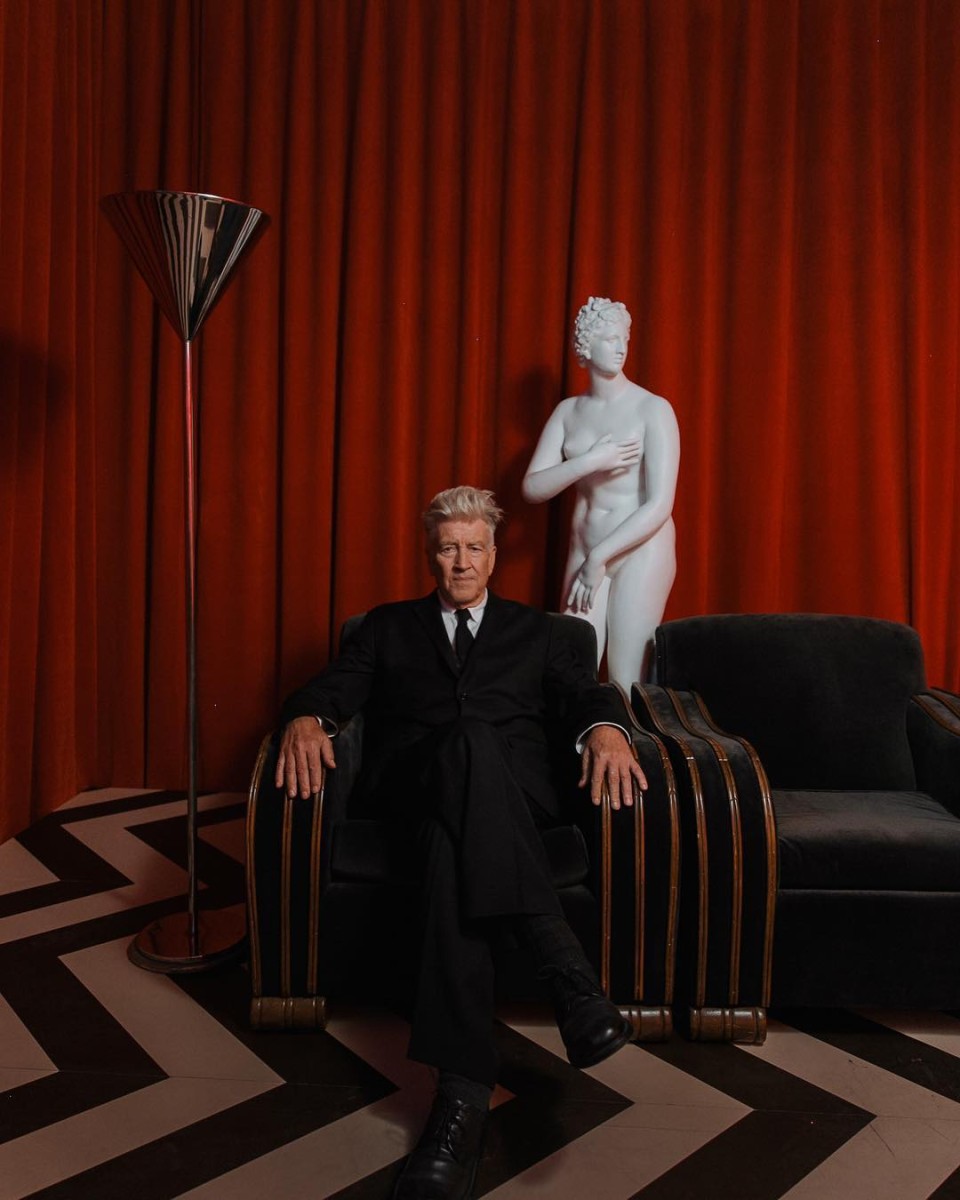 David Lynch needs no introduction. From Mulholland Drive to Twin Peaks, his work has attracted a huge cult following over the decades. But while his films often explore the dark, twisted corners of the human psyche, Lynch is a bright, cheerful and even wholesome character with tons of Midwestern charm. What gives?
For years, Lynch has been a major proponent of transcendental meditation as a path to creativity. He himself has been practicing TM, as it’s known, for decades. In his own words: “I started Transcendental Meditation in 1973 and have not missed a single meditation ever since. Twice a day, every day. It has given me effortless access to unlimited reserves of energy, creativity and happiness deep within. This level of life is sometimes called ‘pure consciousness’—it is a treasury. And this level of life is deep within us all.”
While many think that you have to experience darkness to be able to describe it in your art, Lynch says that it’s actually the opposite: the light that his meditation shines allows him to explore the dark corners of life in his work. “People say my films are dark,” Lynch said. “But like lightness, darkness stems from a reflection of the world. The thing is, I get these ideas that I truly fall in love with. And a good movie idea is often like a girl you’re in love with, but you know she’s not the kind of girl you bring home to your parents, because they sometimes hold some dark and troubling things.”
In 2005, Lynch opened the David Lynch Foundation, which teaches meditation to at-risk populations like children in inner-city schools, veterans and domestic abuse survivors. By helping relieve chronic stress and trauma, its work aims to reduce violence in communities and bring inner peace to individuals.

The Festival of Disruption 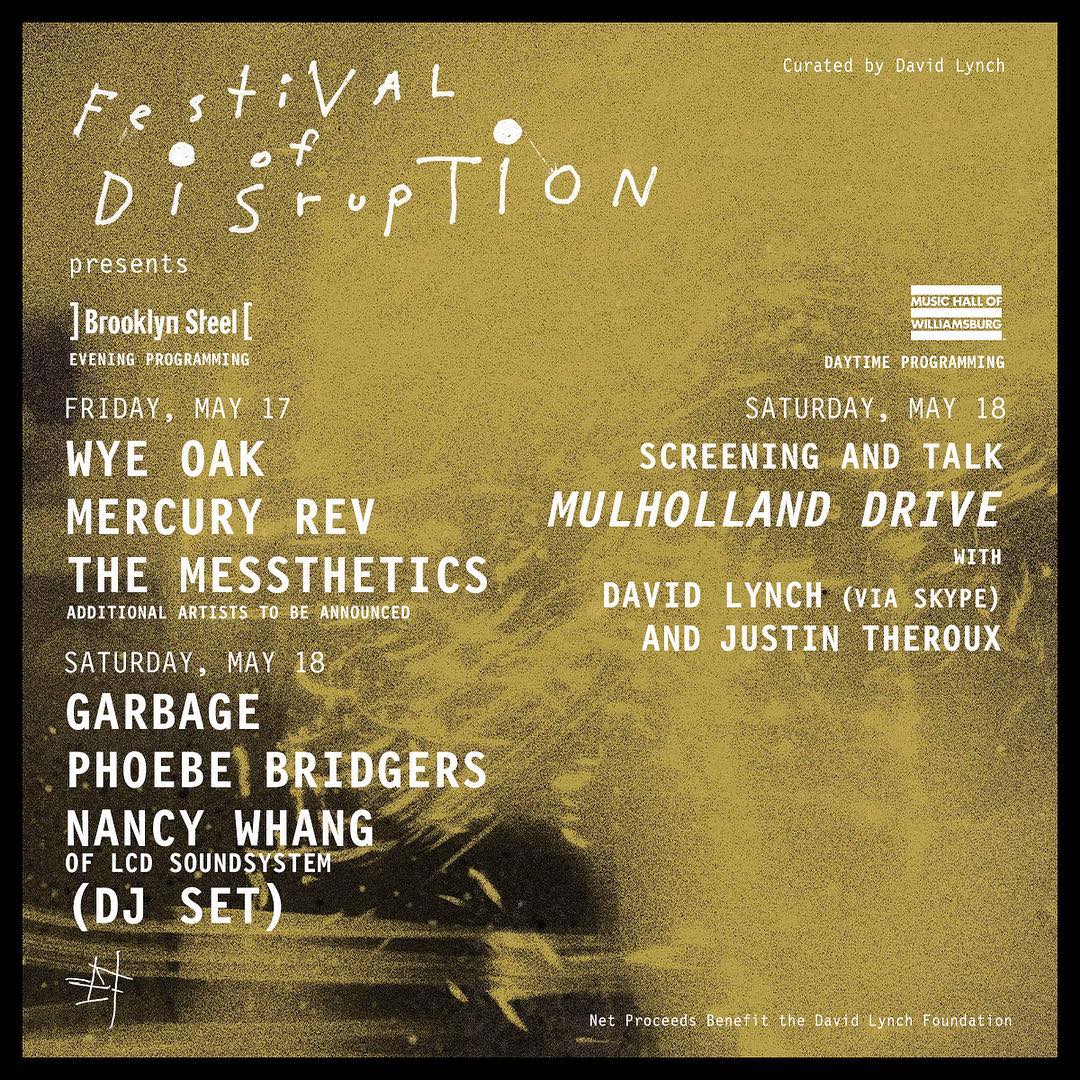 IG: @davidlynchfoundation
For the art world set, he recently launched the annual Festival of Disruption. Held in L.A. and New York, the Festival brings together some of Lynch’s favorite artists to “expand our consciousness through creativity.” The 2019 Festival in New York May 17-18 will feature Angel Olsen, Animal Collective, Au Revoir Simone, a DJ set by Flying Lotus, Jim James, Jon Hopkins, Brian Eno and many more.

After a childhood chronic illness led her to art and her early 20s brought her to meditation, Greenhalgh has made art and mindfulness her life’s work. She worked as a professional artist, illustrator, photographer, performance artist, filmmaker, story writer and poet before becoming a teacher. She’s taught creative mindfulness to people of all ages in the UK, hosting workshops and teaching courses in schools, universities and galleries. Today, you can get a little slice of her wisdom in her book, Stop Look Breathe Create, a four-step method to developing mindfulness through creativity and vice versa. The Art of Mindfulness, her online space, was founded in 2010 to serve as a central hub for her workshops, art and philosophy. You’ll find descriptions of just what is “creative mindfulness,” blog posts, audio clips, artwork, a Facebook community and much more.
IG: @artofmindfulness 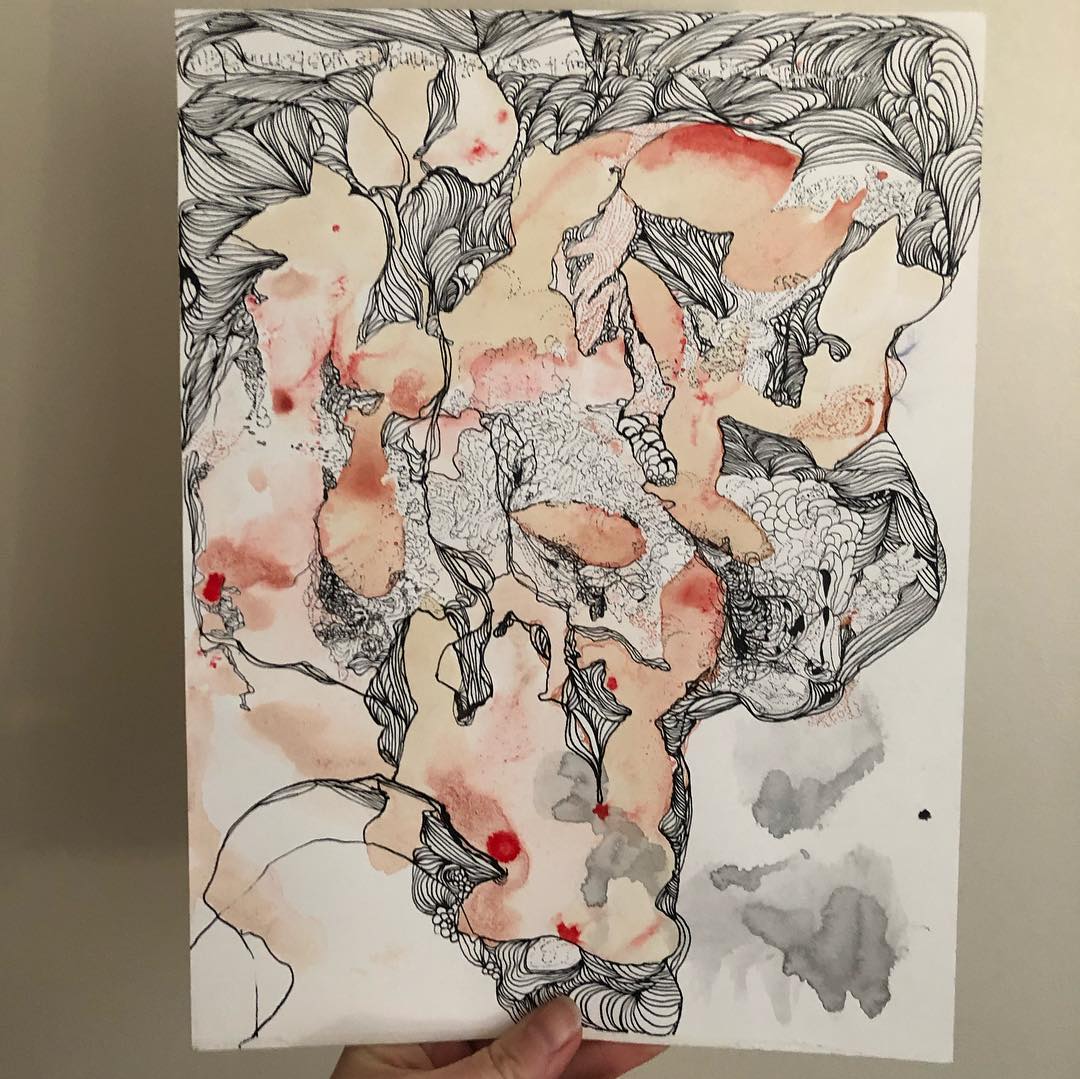 Artist and art historian-turned-creativity teacher, Rose Candela focuses on helping women connect with their intuition and emotions to harness their creativity. Her online coaching sessions and courses will help you “make art, learn creativity and find inner peace,” all from the comfort of your own couch. Sign up for her email list and you’ll get a free lesson to help you process your emotions through art—which is what we’re all trying to do here, if we’re being honest.
Want more? For $197 you can take her Learn Creativity course, “a woman’s guide to self acceptance through creative sessions.” She’ll help you work through your creative block, your self-doubts and insecurity as an artist, and promises to help make art fun again. As every working artist knows, the pressure to produce can sometimes make the job of your dreams feel like a living hell.
Candela also offers one-on-one coaching sessions to help you gain Creative Clarity, and a Cyclical planning + monthly accountability package, if you need a little extra help with your creative burnout. It’s a thing, and it can be cured; she promises. Finally, you can find her personal musings on the blog (for free!) and her (very affordable!) moon art.
IG: @rosecandela 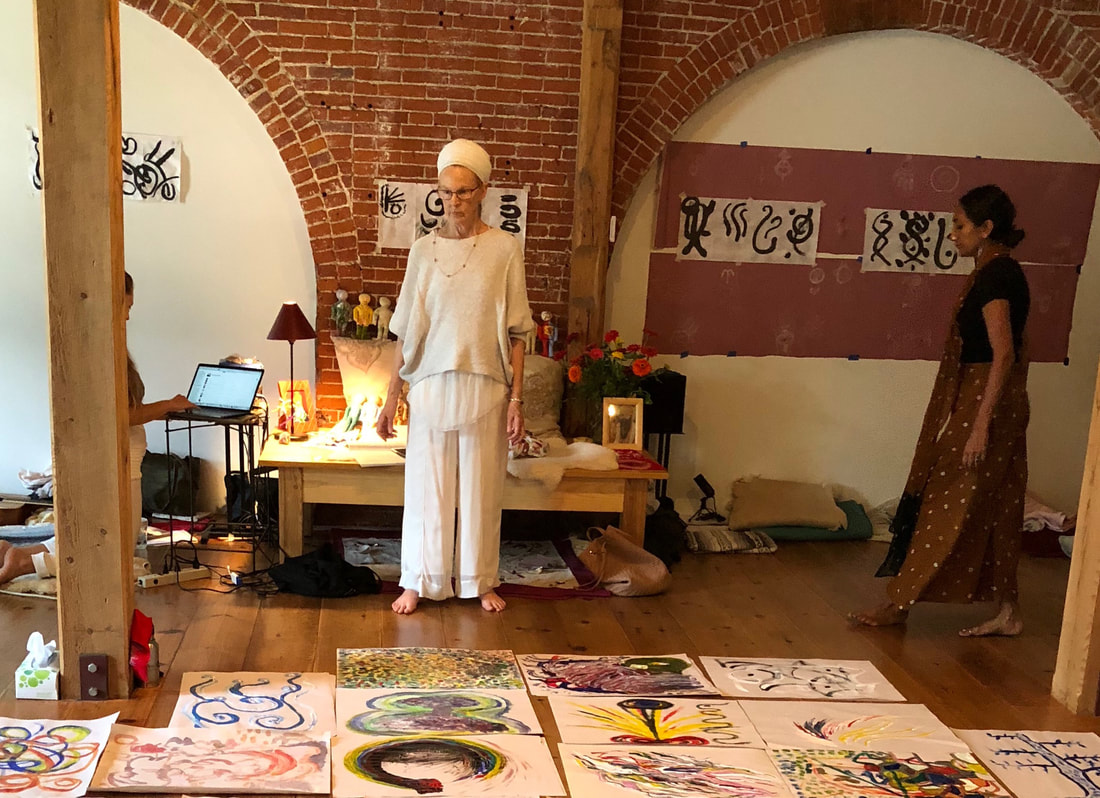 At the Sacred Art and Yoga Teacher Training.
Looking for a way to blend spirituality into your art practice? Hari Kirin’s your girl. From George Harrison to Adrian Piper, many artists have also devoted themselves to yoga practice. Hari Kirin follows in the same vein; she has been a professional artist since she got her BFA in 1976 and a yogi for almost as long. In her 20s, she met Yogi Bhajan, the Sikh teacher who brought Kundalini yoga to the West. He became her spiritual teacher, gave Hari Kirin her name and profoundly inspired the course of her life.
Since then, Hari Kirin has been working to bringing together the worlds of art and mindfulness and spirituality. She offers individual video call sessions, e-courses and retreats that combine yoga practice, painting, dancing, writing and “inspiration with fellow artist yogis.” In 2011, she published a very appropriately named book, Art & Yoga. Deepak Chopra, the Larry Gagosian of the Western wellness and spirituality scene, even vetted it. He called it a “beautiful, clear and useful book,” so you know it’s good.
IG: @harikirinkhalsa