Flowers, trees, and garden wildlife have long been present in the Classical History of Art. They typically took on metaphorical meaning in religious paintings (the Virgin Mary was often painted in a walled garden, symbolising her virginity), or were a background feature for an portrait. When we see nature in pre-19th Century art, it is typically long stretches of rolling hills or Sublime landscapes. Flowers were more likely seen emerging from vases than the ground. However, a change came in the 19th Century when the growing middle classes started to have their own gardens (as opposed to lavish estates owned by the wealthy, or public parks) and groups like the Impressionists – wishing to capture natural light and the escapist worlds of the bourgeoisie – painted these new spaces passionately. The Industrial Revolution was building a new world separate form nature, led by machines, speed, and productivity – gardens were one way that the middle classes could preserve a part of an ever-changing world.

We’ve taken a look through the last 150 years of art history to find some of our favourite gardens to inspire your next attempt at gardening. 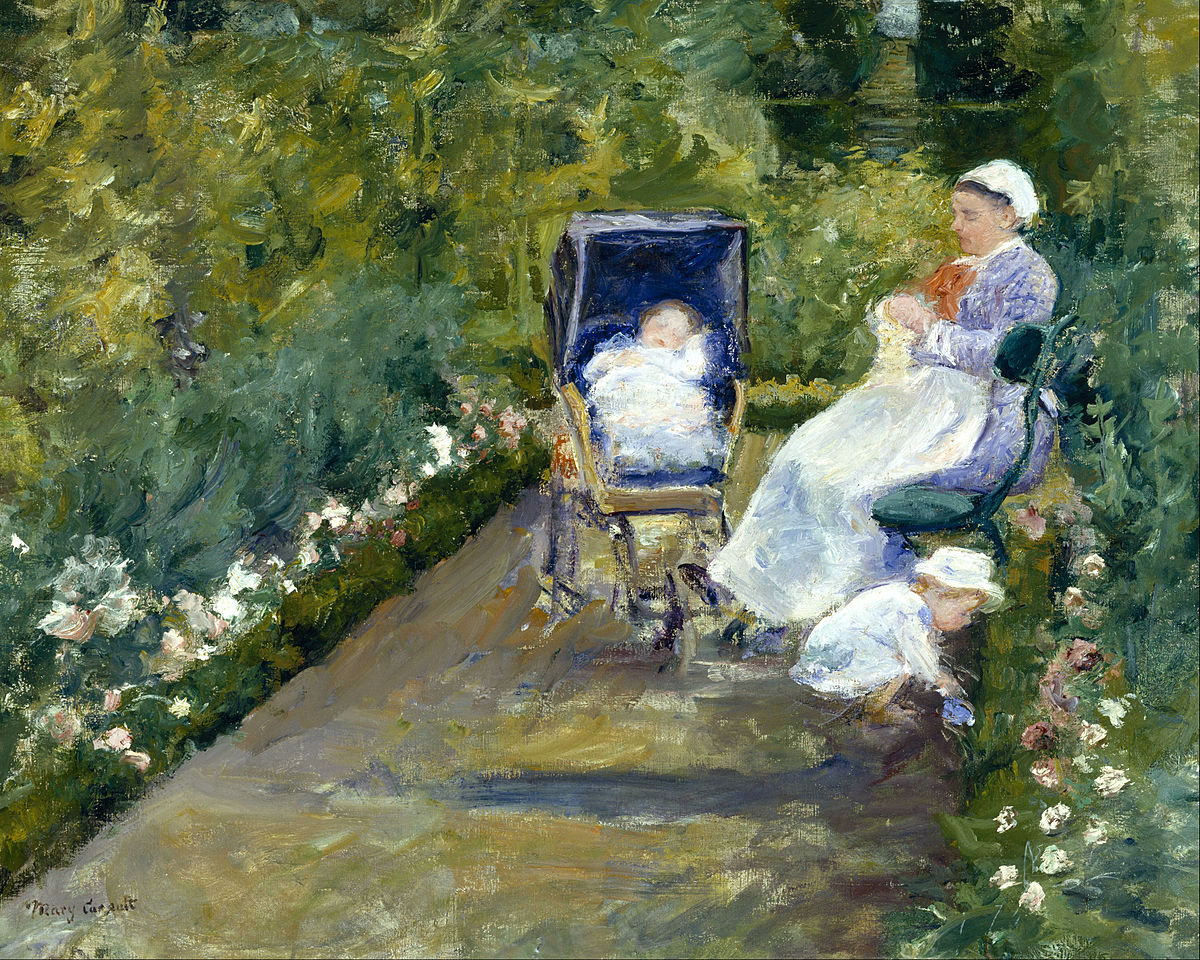 This work was included in the eighth Impressionist Exhibition in Paris and was the first Impressionist work of Cassatt’s to capture the outdoors. As a woman in society, Cassatt had a unique vantage point for painting, and is known for her portrayals of domestic scenes featuring other women and children. We would very much like to be that baby in the pram, having a snooze in the sun. 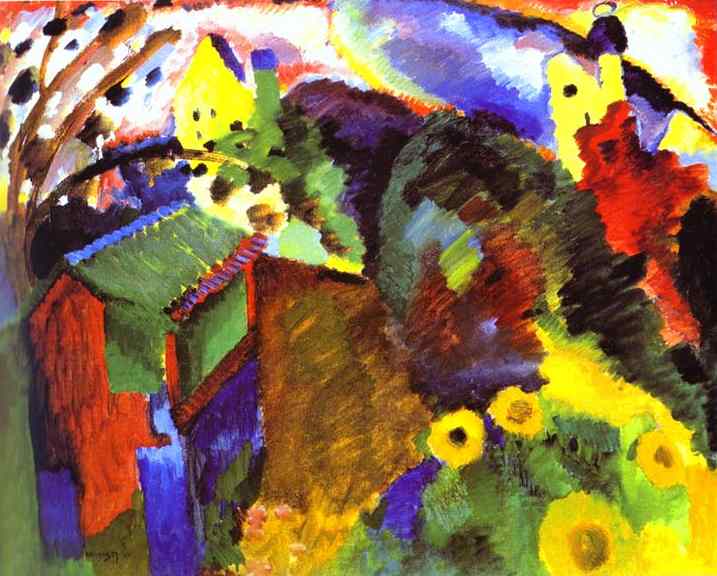 We’re not sure if sitting in a garden that looks like this would be particularly relaxing, but it does make for an impactful painting. 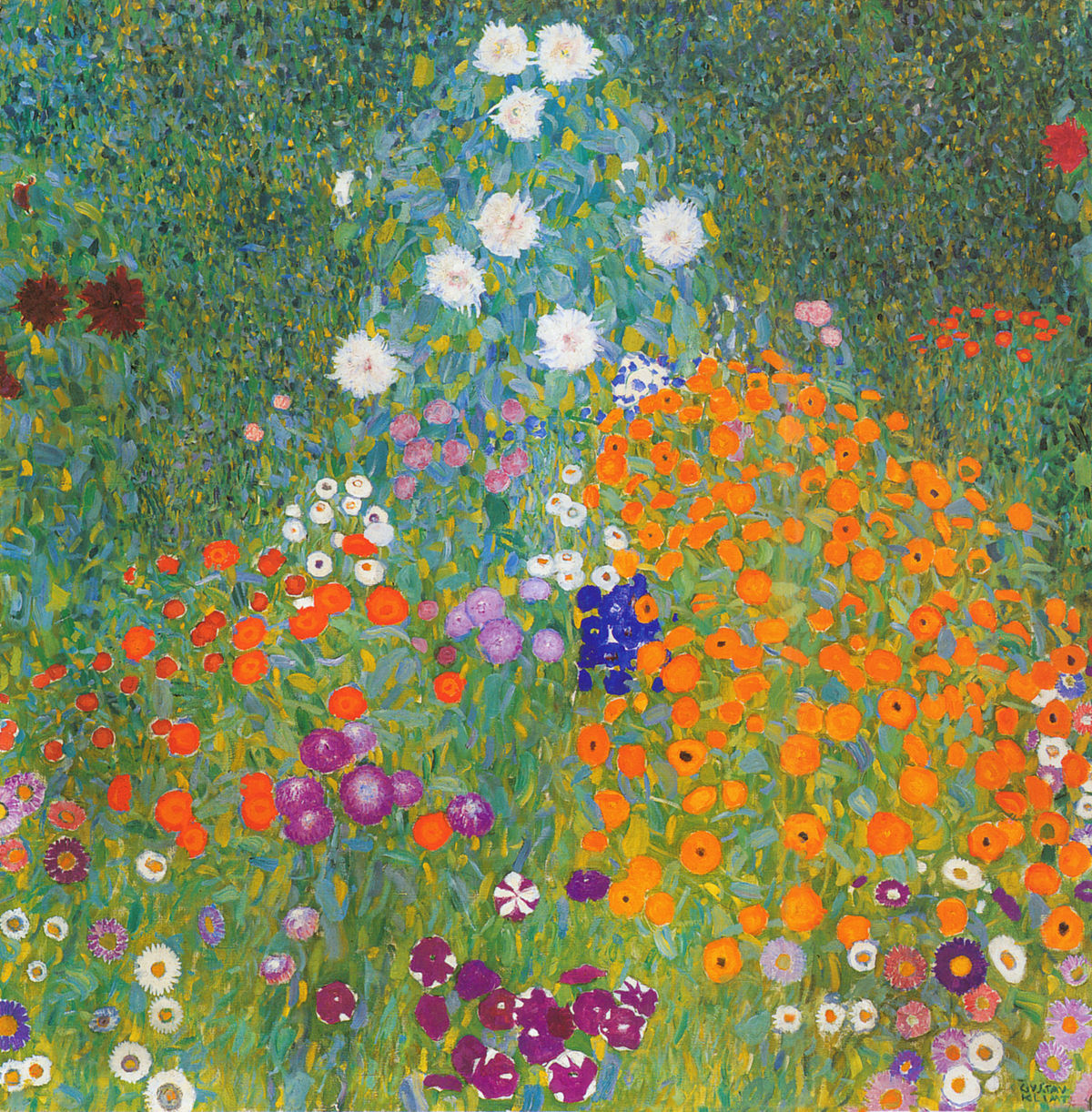 Gardens are unlikely to be the subject matter you associate Klimt with, but he painted several floral landscapes during his career. After his ‘Golden Period’ (the one that included The Kiss and his other Greatest Hits) Klimt started to move in a more Impressionist-inspired direction, and the decorative qualities of flowers were a gateway for him to achieve this transition. The flattened style of Van Gogh was also inspirational for Klimt when making these garden pieces. 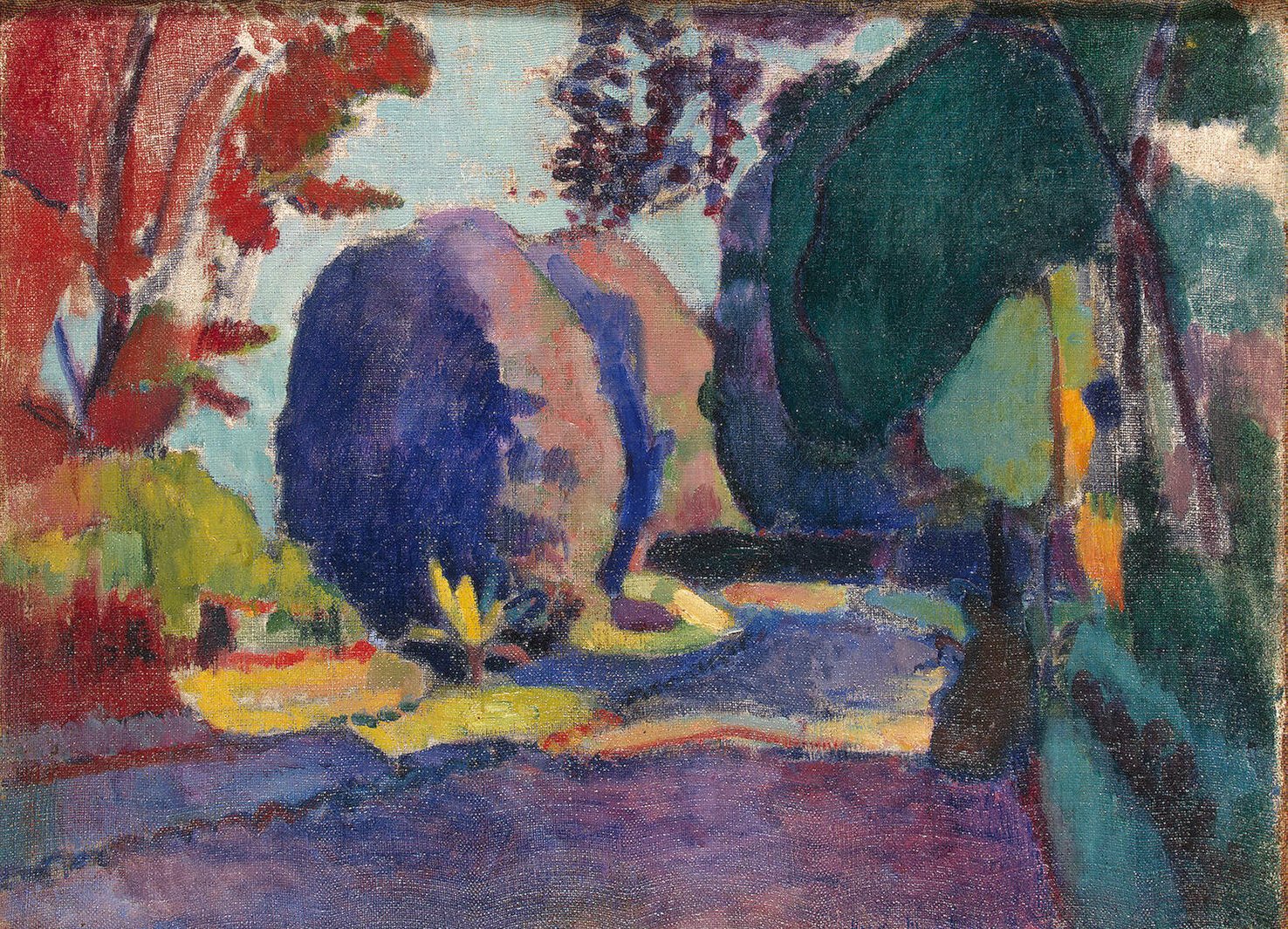 We love this cool, shadowy garden by Matisse, and would give anything to walk through it barefoot. 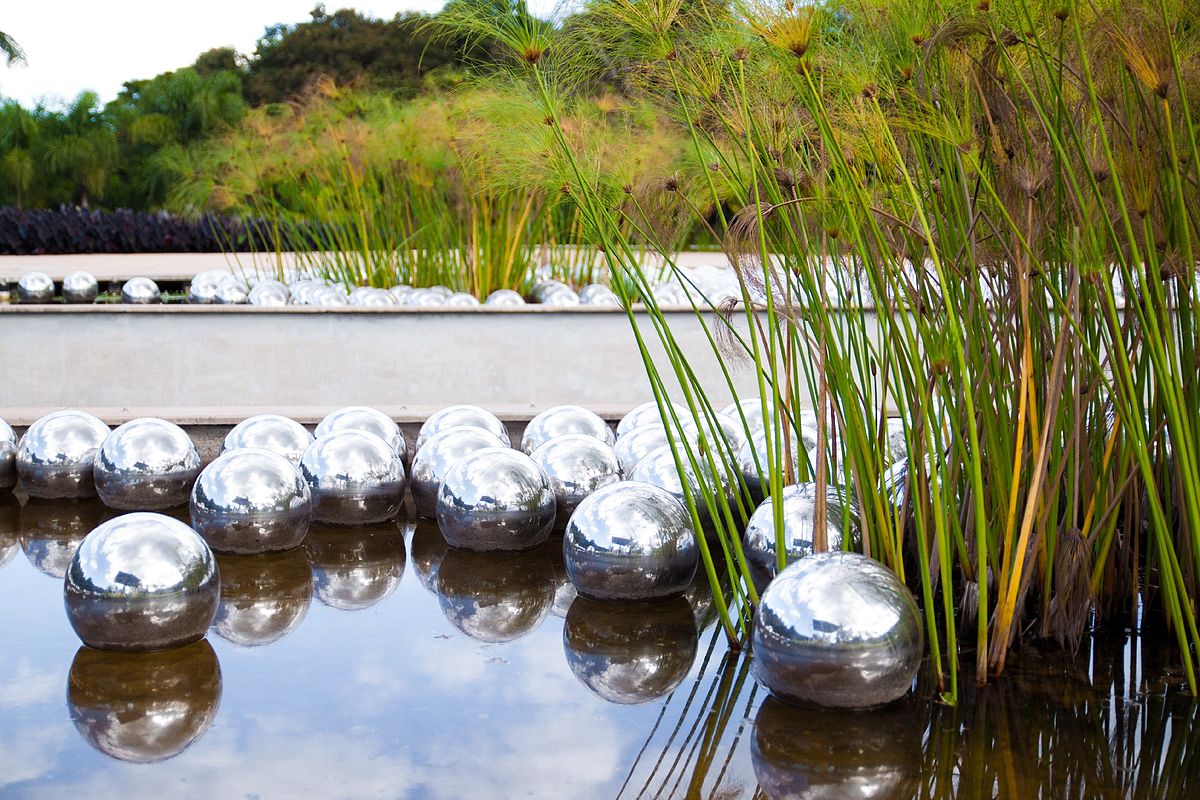 First shown (unofficially, and ending up with the artist being thrown out) at the Venice Biennale in 1966, Narcissus Garden consisted of 1500 mirrored plastic (later steel) spheres laid on the ground (and later in water). Kusama herself stood amongst them wearing a golden kimono, selling them for $2. The installation got its name from the Greek myth of Narcissus who fell in love with his own image reflected in a lake. 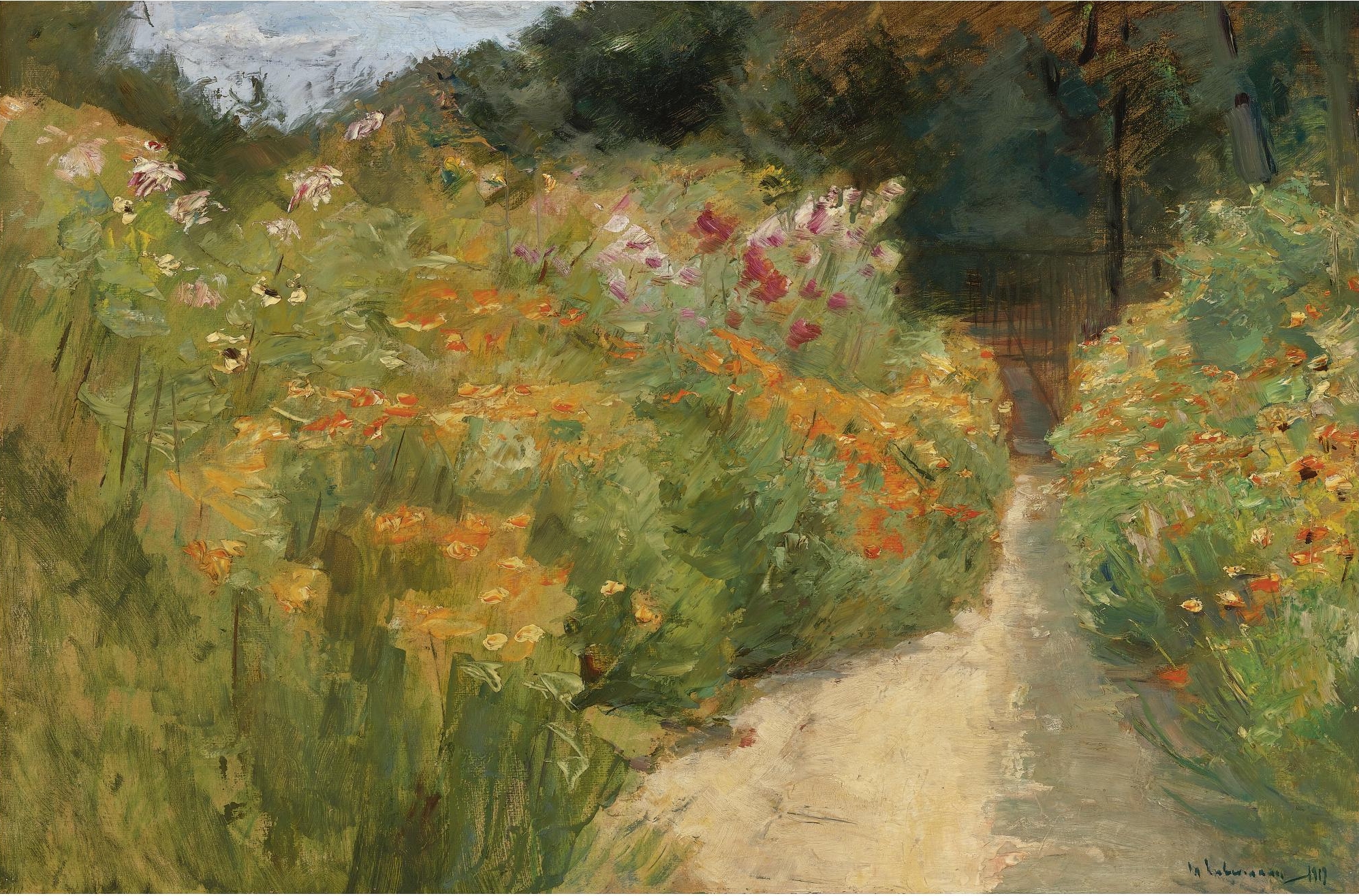 Wild gardens are very in fashion right now (and very good for bees), so we’re all in favour of these untamed flowerbeds by Liebermann. 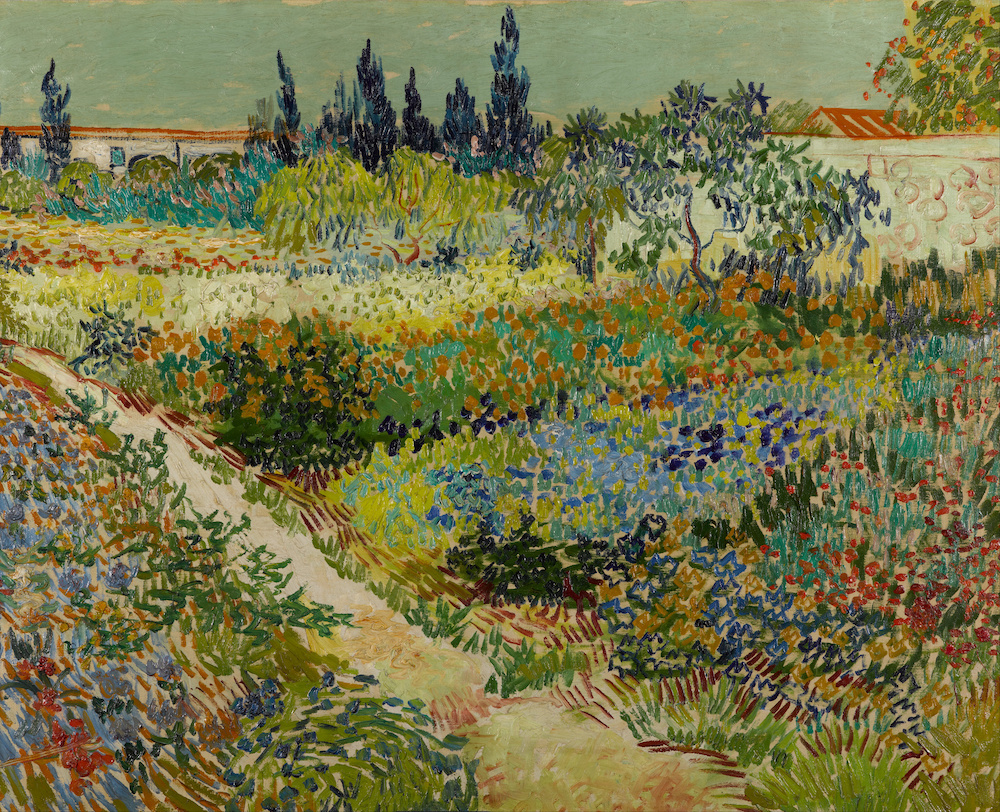 Van Gogh made two paintings of this garden in the same month, and in this one we get a sense of his interest in the Pointillist way of doing things – applying individual dabs of colour to build up the picture for the sake of decoration rather than for recreating a precise reality. The Dutch artist arrived in Arles in the February of the year he made this painting, he stayed there for 14 months and it was the location of his famous Yellow House. 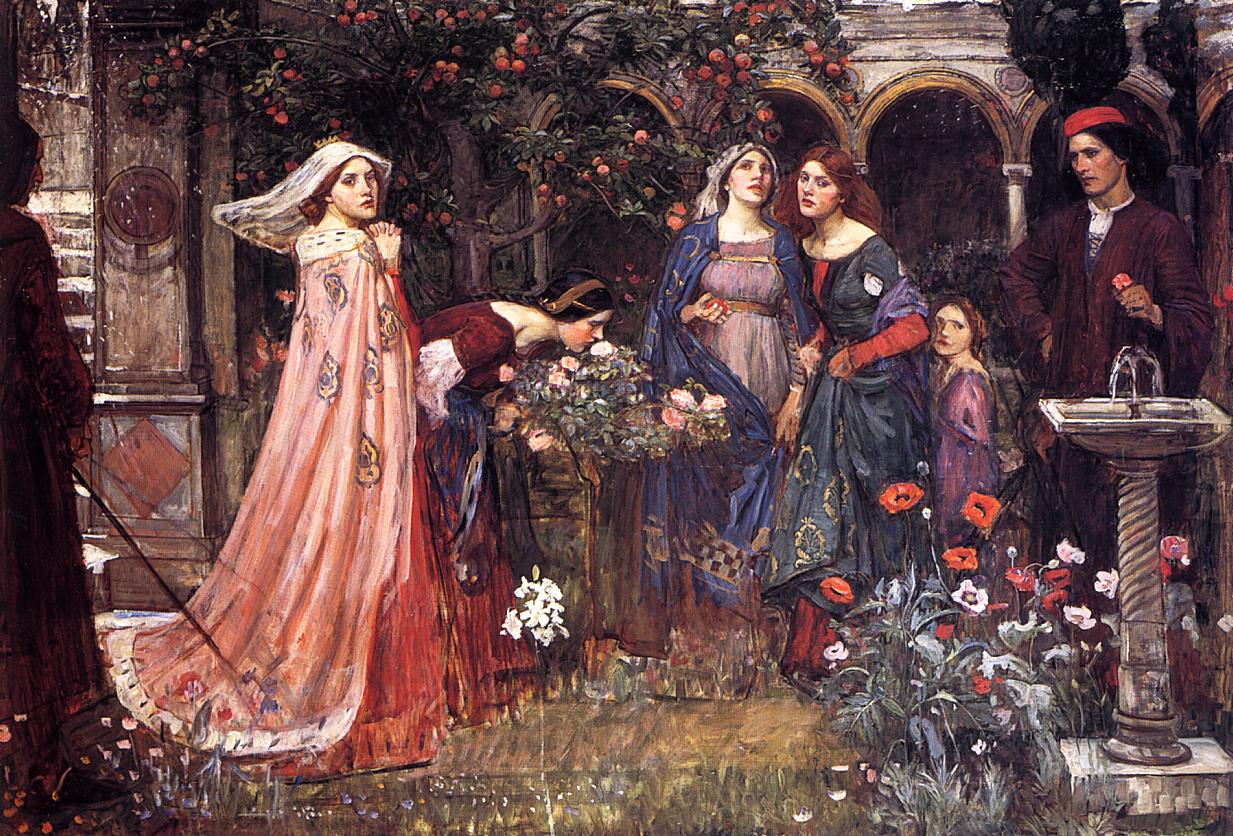 This typically Pre-Raphaelite scene and architectural garden is so romantic – can you imagine the al fresco dinner parties you could throw here!?

Corner of the Garden at Montgeron – Claude Monet, 1877 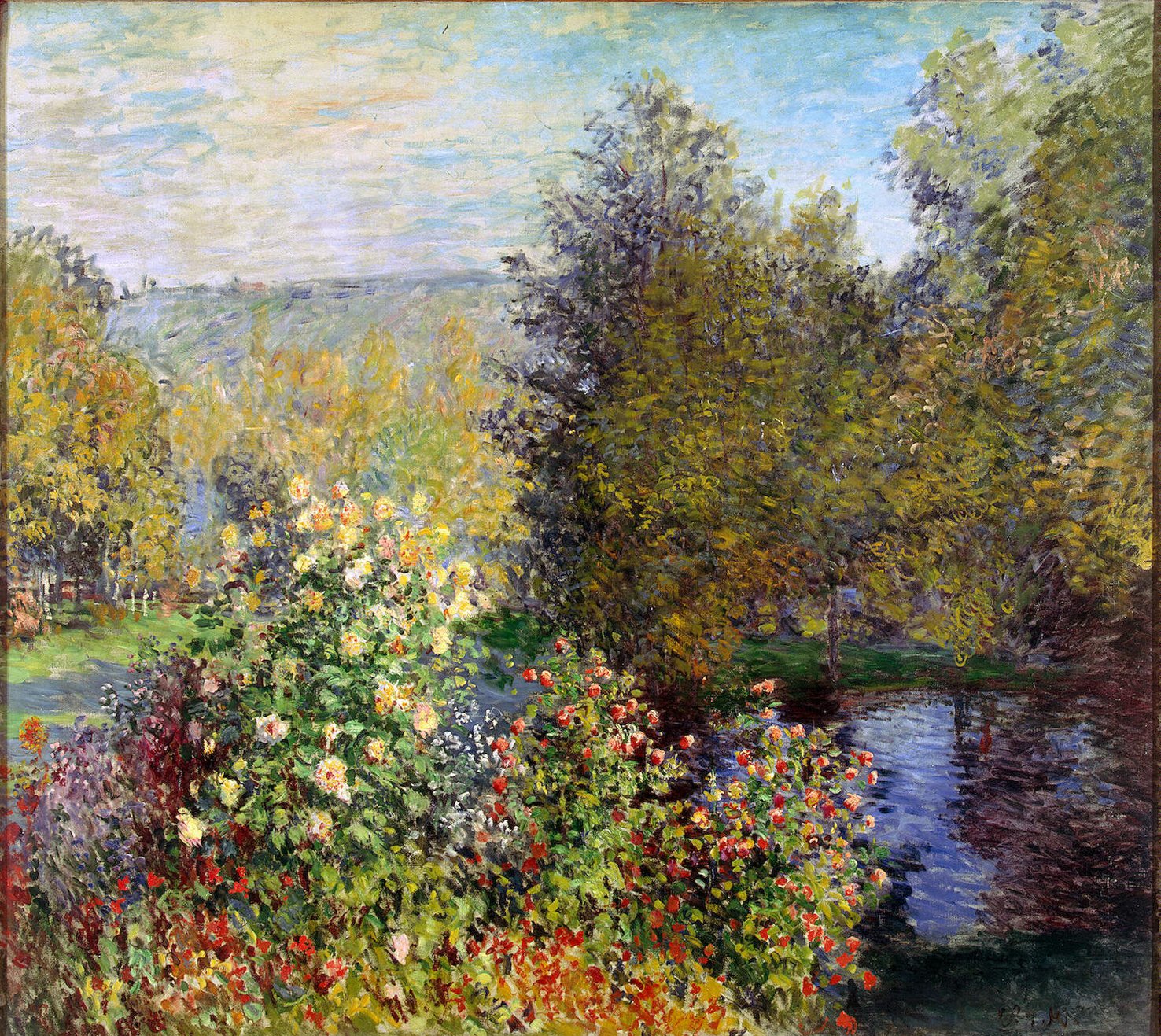 Monet was a really keen gardener, and loved to design the gardens of his rented Parisian properties. In his old age, he had 6 gardeners working full time for him, and he invested heavily into creating his dream gardens. He was even subscribed to Country Life magazine! This work is one of four decorative panels commissioned for a grand drawing room by Ernest Hoschede – an early patron of the Impressionists.

Eugene Manet and His Daughter in the Garden – Berthe Morisot, 1883 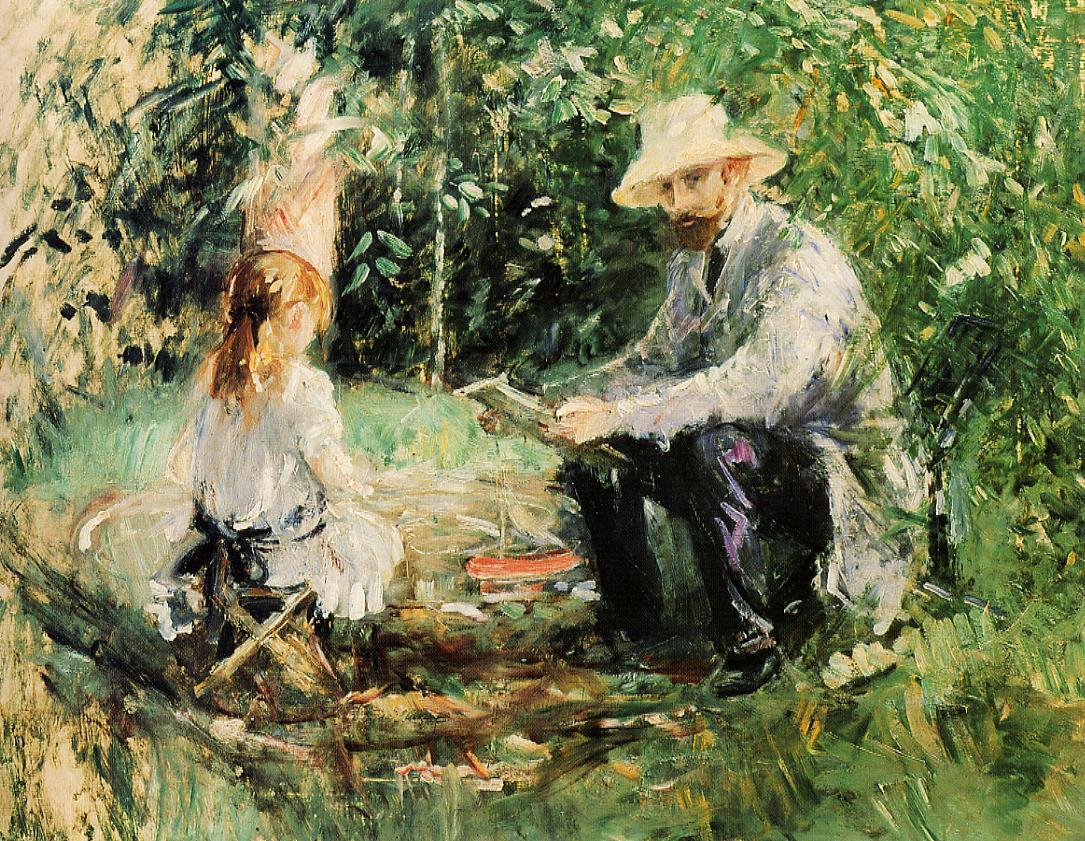 This touching scene of Eugene Manet (brother of Edouard and Morisot’s husband) and their daughter Julie is a beautiful reminder of the power gardens have to connect us to one another. 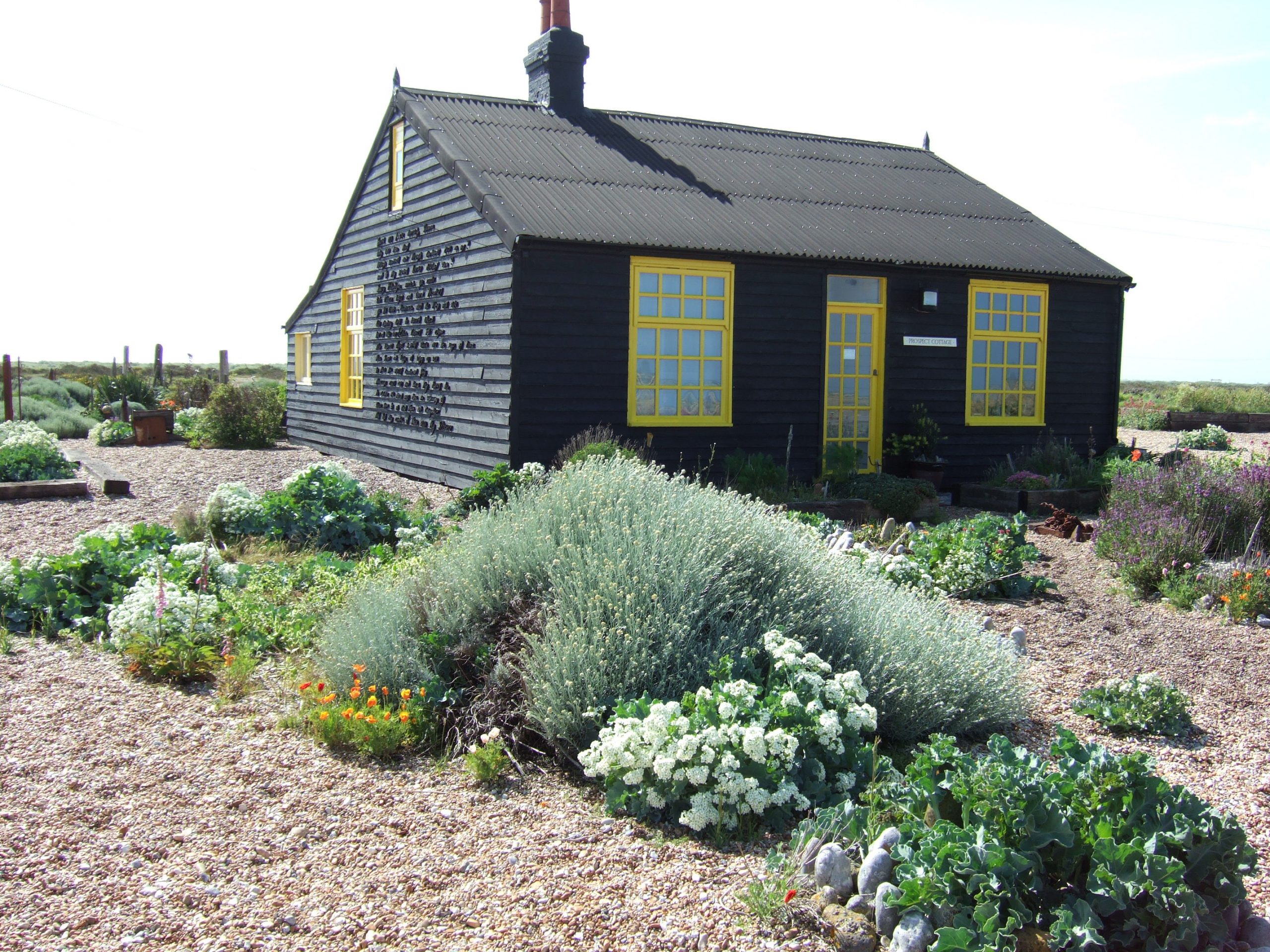 Artist, gay rights activist, and director Derek Jarman bought Prospect Cottage in Dungeness, Kent, in 1987 and lived there until his death. Jarman filmed his 1990 film ‘The Garden’ at Prospect Cottage, and the garden itself is filled with sculptures, plants, and driftwood from local beaches. Jarman was living with AIDS from 1986 and his garden was a way of him processing his illness and the loss of some of his best friends. 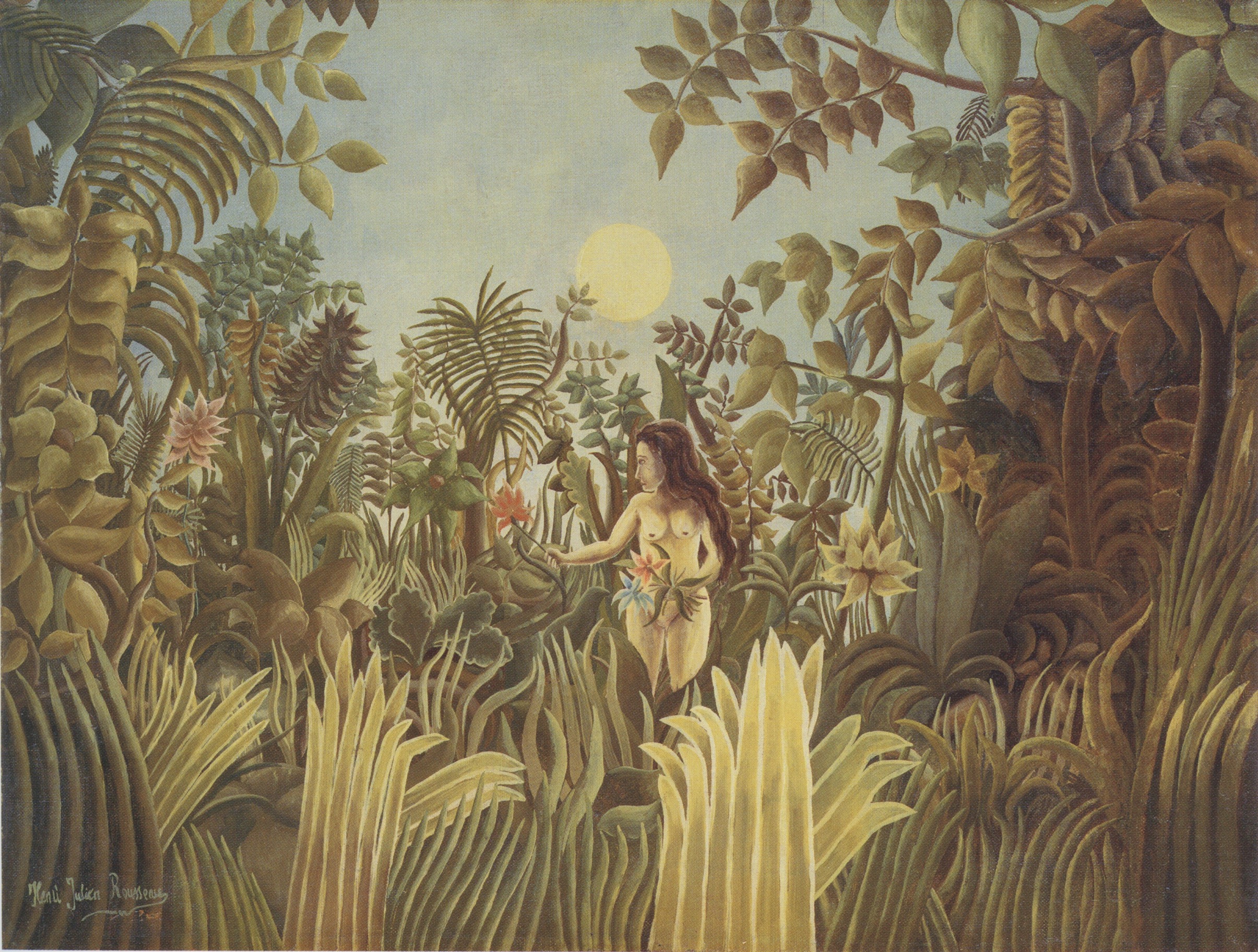 Not so much the type of garden you’d have round the back of your house, but certainly beautiful, Rousseau’s idea of Eden is a bountiful jungle. 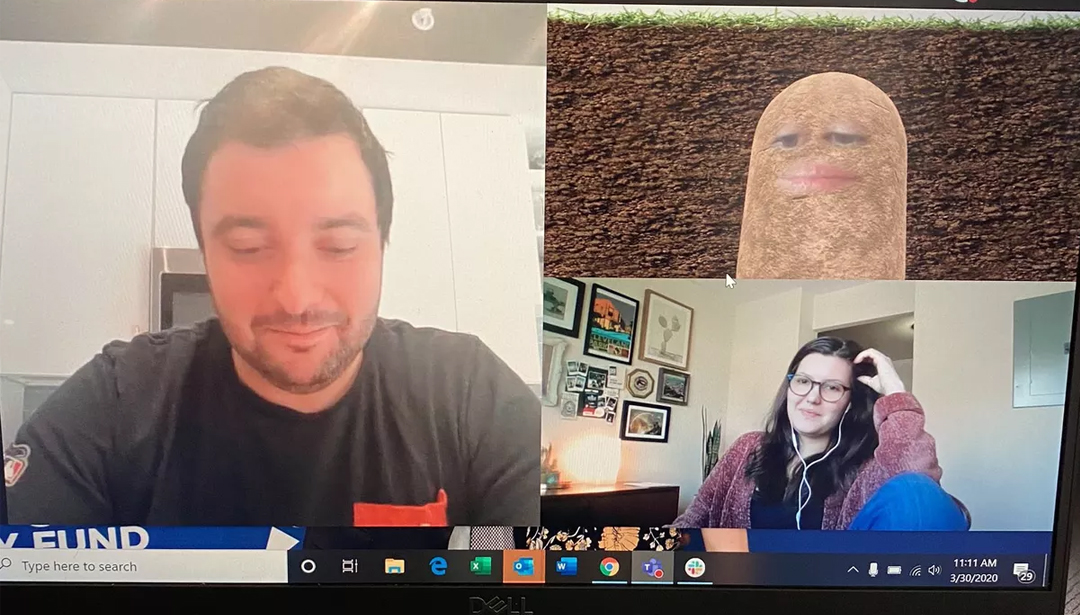 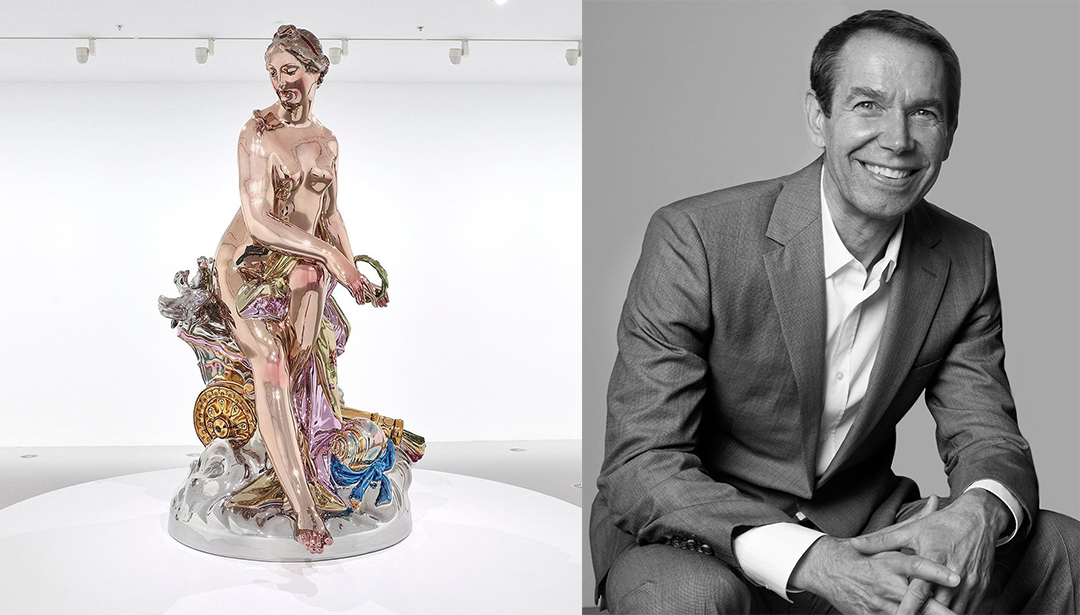 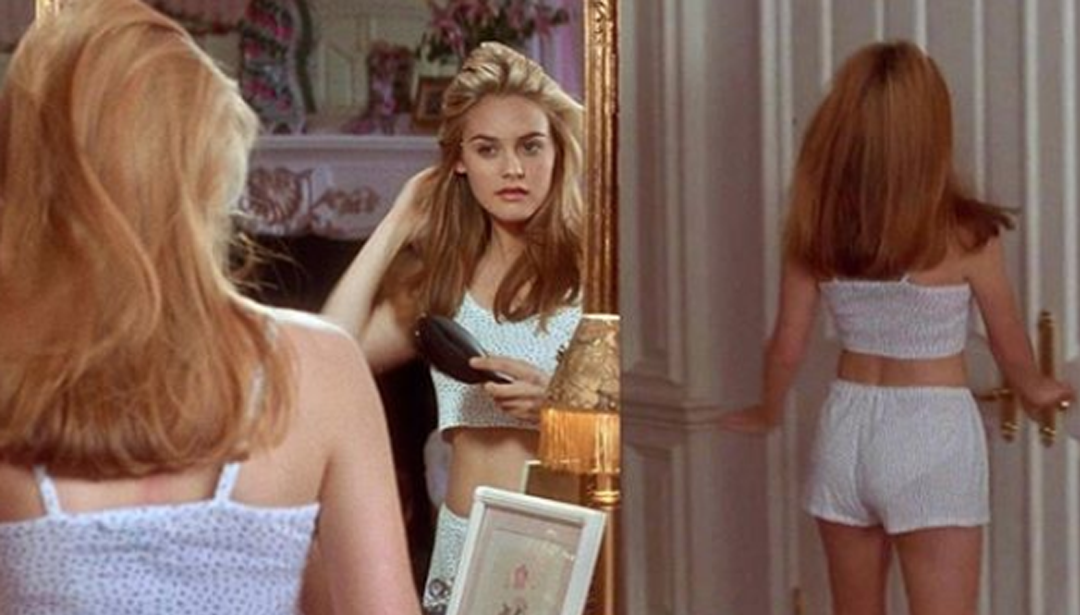