The art world loves to beat us over the head with originality, but everyone knows that the best artists steal, steal, steal. As Jerry Saltz always says, that’s why they stand so close to paintings at museums—they want to pick up on all the secrets of how it was made.
But for most aspiring artists, the thievery begins far earlier than that, in art school. From the days of masters and apprentices, young art hoes cut their teeth on old masters’ paintings. Not literally, of course—the Louvre would be filled with paintings with bite marks all over them—but copying masterpieces was and still is a standard exercise in art school.
Of course, you can slave away over Da Vinci for hours—years, even—and you still won’t have the Mona Lisa. But in the honest spirit of imitation, we’ve decided to let you in on a few trade secrets. Pssstt… here’s how you copy the modern masters.

Nu couché au coussin bleu (1916).
First things first, move to Paris. Fall in with some hard-partying artist friends, then outdo them all with your debauched antics. Snort everything you can get your hands on, and for full effect, try to unexpectedly strip naked in the middle of a party at least once a month. Once you’ve gotten the hang of this, have as many all-encompassing affairs as possible, the more dramatic the better. We’re talking way older, way younger, preferably married. Got all that down? Good. Now it’s time to start painting. Limit your subjects to the most sensual and scandalous depictions of the low-life in your neighborhood, which should be edgy, artsy and dangerous, but that goes without saying. 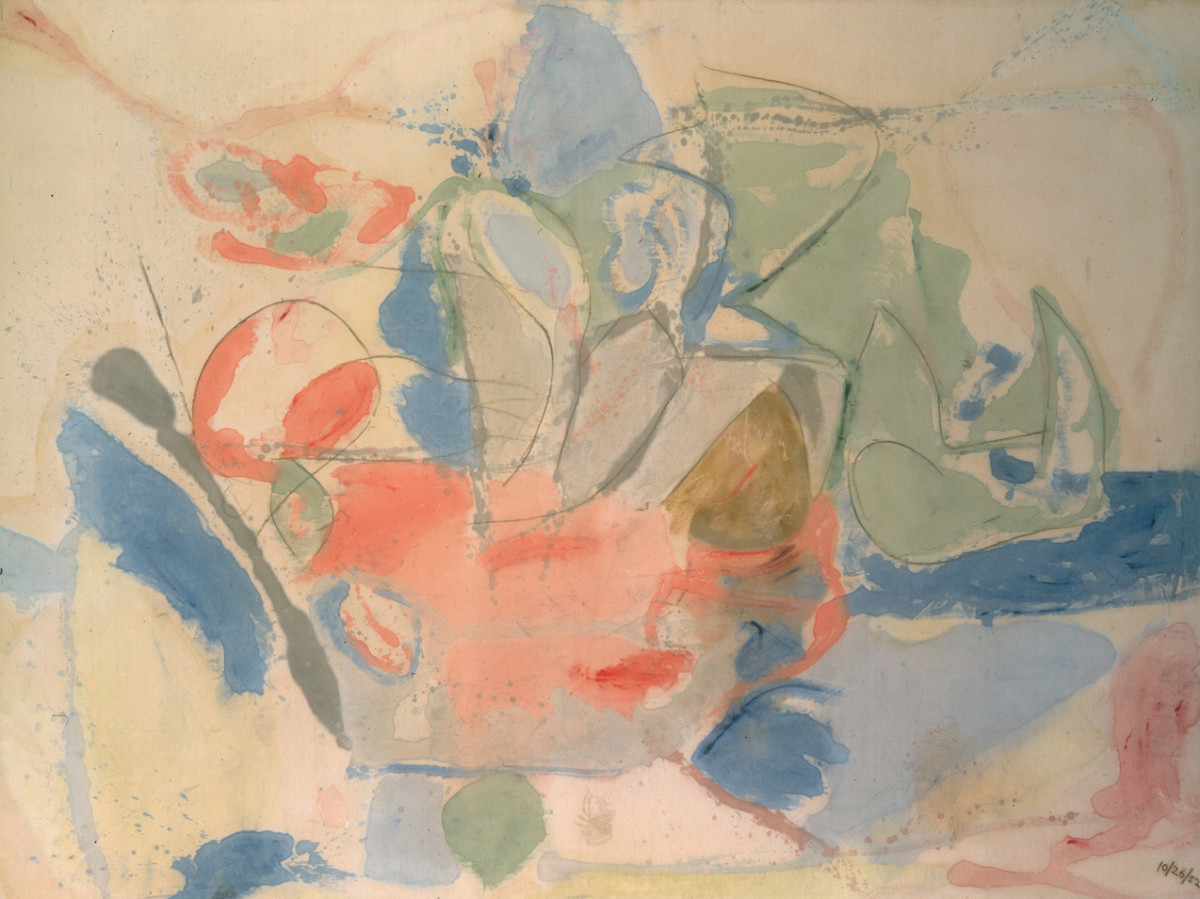 Mountains and Sea (1952).
If you can, make an effort to be born into a very WASPy family. Acceptable zip codes include the wealthy suburbs of Connecticut, the Upper East Side of Manhattan, or Zurich, if daddy was a diplomat. Attend a fancy art school and study under all the main art world daddies of your day. Then, shock the daddies by pioneering a grandiose new painting technique—since the stain technique is already taken, you’ll have to think of your own. Since artists have started ejaculating on their paintings, we might be hitting a wall of new ways to apply medium to a canvas, but I’m sure you’ll think of something. 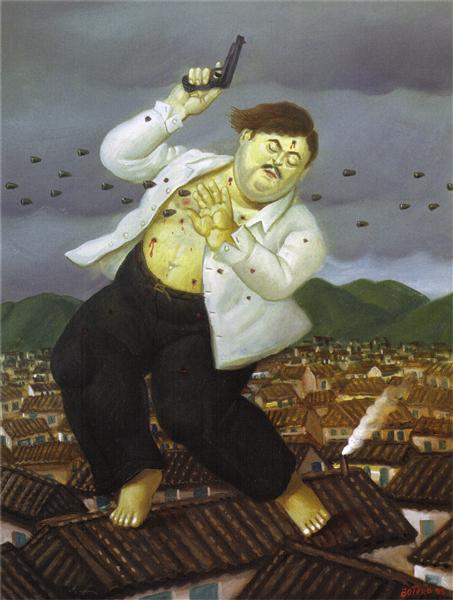 Death of Pablo Escobar (1999).
First things first, hole up in your room for a month butt chugging the most surreal and absurdly complicated Colombian literature you can get your hands on. Start with Borges and go from there. You can also incorporate some graduate-level metaphysics into your syllabus. Now that you’ve completed your artistic education, make a folder of all the photos your friends have asked you to delete off social media because they look fat. Using those photos as inspiration, launch into a portrait series of all your country’s presidents, then once you’ve completed those, go on to other illustrious and preferably corrupt political figures, respected cultural icons, and occasionally throw in a pony or two. 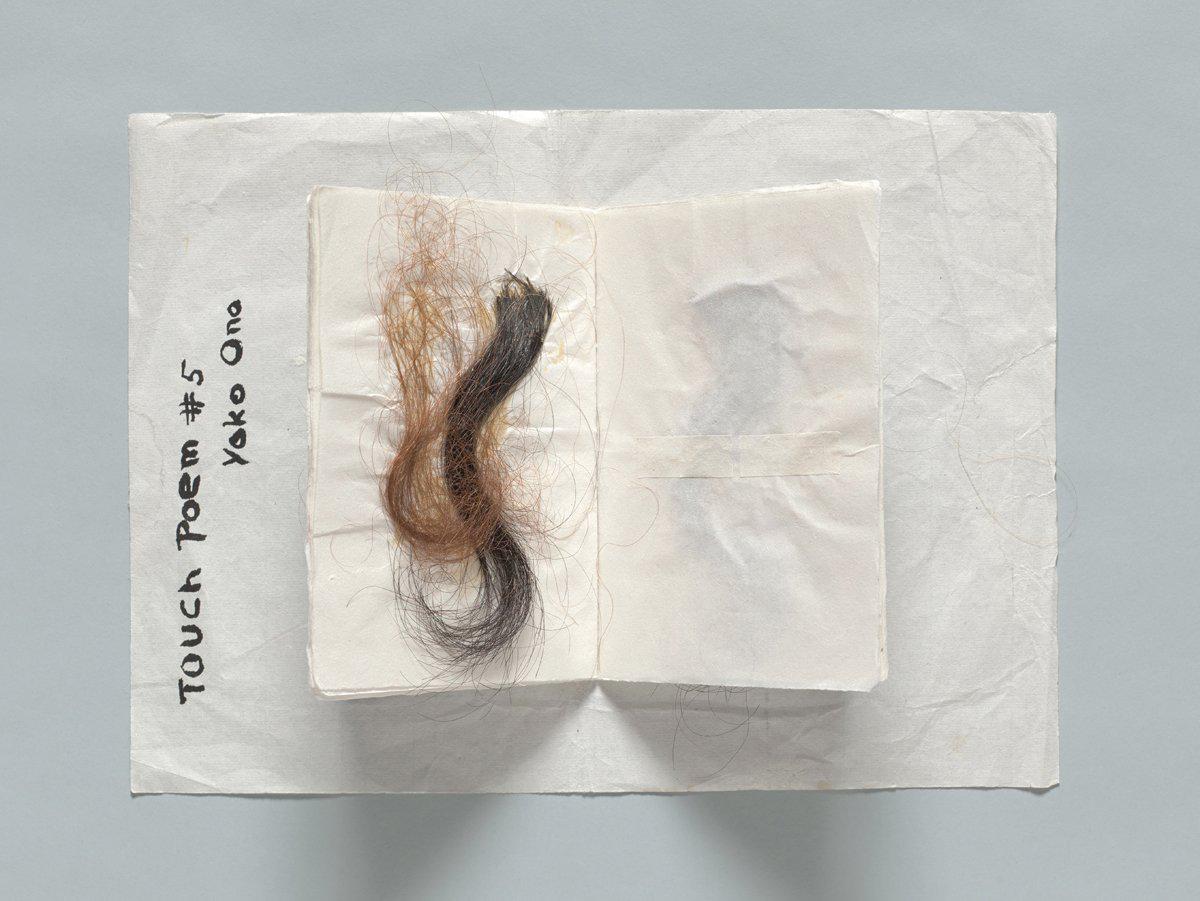 Touch Poem #5 (1960).
After possibly contributing to the split of the biggest rock sensation of your century, your notoriety is sealed, so you might as well do whatever the fuck you want with your art. And what exactly do you choose to make? For the most part, happy, cryptic little Zen-inspired instruction pieces. And how will you dream up these bits of nonsensical wisdom? Since we live in the age of robots, with your instruction piece bot, of course. Just feed the algorithm a long string of sentences describing what you do in a typical day—wake up; do the dishes; feed the cat; make some rice; pick up the kids; drink a beer on the fire escape; brush your teeth; read a novel before falling asleep in the bed you share with the most famous rock star of your century. Oops, that last one might just be Yoko.
Anyway, the bot will process and expertly jumble up your phrases and spit out something like: “Brush your teeth with beer with one hand while petting a cat with the other on the fire escape for exactly one hour. Each time the cat jumps off the fire escape, start over with a new cat.” What the hell does it mean? No clue, but I do know that I now have a burning desire to try it out.
Alternatively, glue a lock of your pubes to a white piece of paper and call it Touch Poem #65. 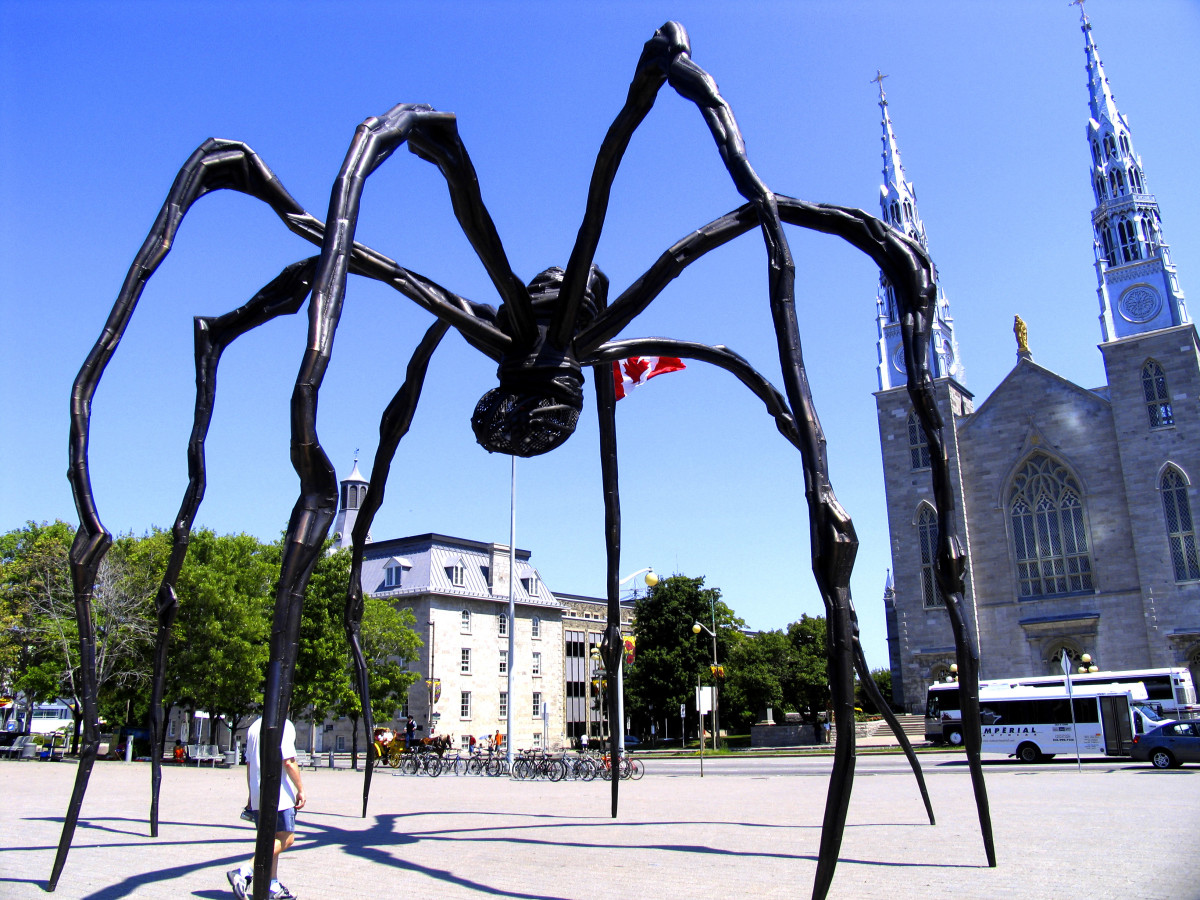 Maman (1999).
To copy Louise Bourgeois, the most important thing you’ll need to remember is this: always make sure your work confuses the viewer. Although you’ll work in recognizable shapes, you should always title them something totally ambiguous and unrelated, just to, you know, throw ‘em off your trail.
Bourgeois said that art was her therapy, and it shows; much of her work looks like something out of Carl Jung’s textbook. A giant penis that could also be the torso of a woman if you squint a little bit; a giant spider that represents your mom; women with houses for heads; a bunch of flaccid penises in a bouquet. Louise Bourgeois piece or a Freudian dream I made up to have something to talk about in therapy? So if you want to make work that looks like hers, I suggest you make a habit of sketching after your weekly hour of discussing whether that giant squirrel that ate you alive last night represents your overbearing mother on the couch of a middle-aged woman with an Ellen DeGeneres haircut (but maybe I’m just describing my dream therapist here). 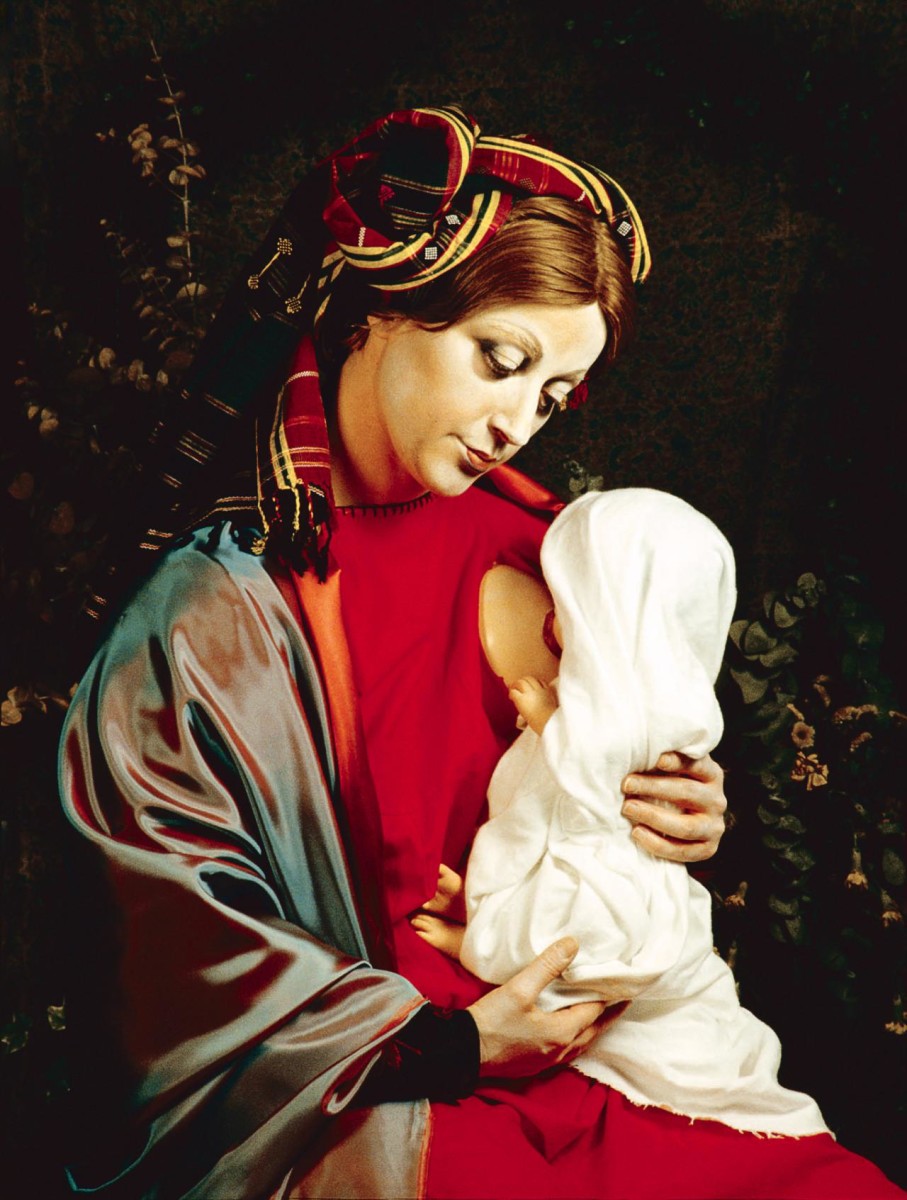 Untitled #223 (1990).
While copying Louise Bourgeois means you have to dive deep inside yourself, Cindy Sherman requires that you dive as far away from yourself as possible (don’t think too hard about the metaphor, you know what I mean). An often-copied artist, Sherman did quite a bit of copying herself. She might be best known for her Untitled Film Stills series, but it’s in her later History Portraits/Old Masters series that Sherman reveals herself to be a truly outstanding copycat. Make like Sherman by staging some very ‘Grammable “life imitates art” shots, using the Louvre catalog as inspiration. 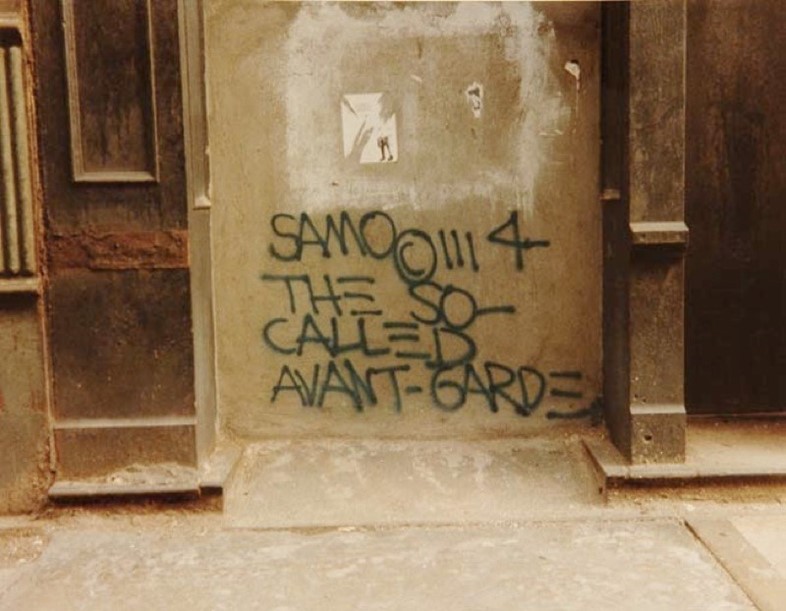 The major ingredients of an early Basquiat? Angst, spray paint, and more angst. Rightfully so—this brilliant artist was plagued his entire short life by the New York establishment’s racism and exclusion, even when he broke into their circle. To pull a Basquiat, so to speak, you’ll need to think up some really juicy, cryptic phrases, then scrawl them strategically on walls near the hottest downtown galleries. Don’t live in New York? No problem, just find the person with the most IG followers in your town, find out where they get their morning coffee and mark up every surface between there and their house. Easy.
Here are a few SAMO (Basquiat’s graffiti tag, meaning same old shit) quotes to get the creative juice flowing—and get you gallery representation in no time:
“SAMO as a neo art form”
“SAMO as an end to mindwash religion, nowhere politics and bogus philosophy”
“SAMO as an escape clause”
“SAMO as an end to playing art”
And our personal favorite:
“SAMO as an alternative 2 playing art with the ‘radical chic’ sect on Daddy’s $ funds” 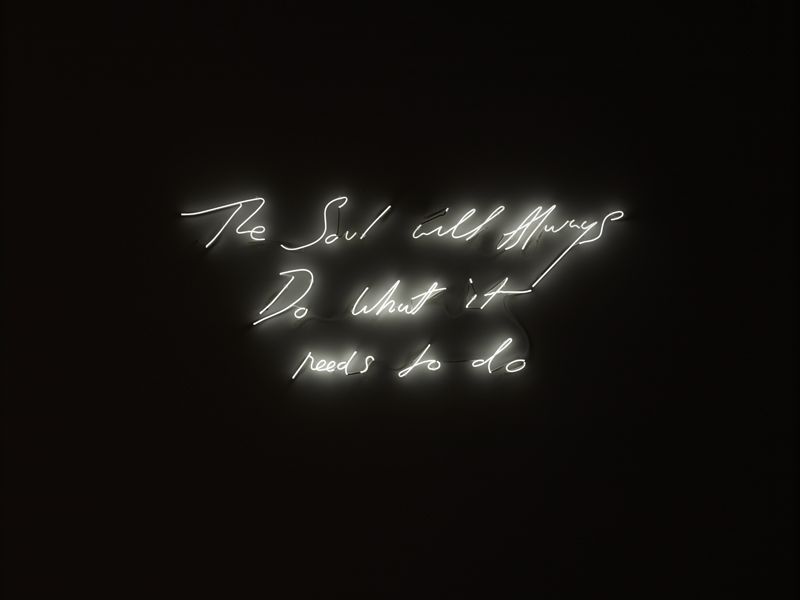 The Soul Will Always Do What It Needs to Do (2014).
If you want to copy Tracey Emin the easy way, you already know what to do: stay in bed for several days drinking and fucking, exhibit the result at the Tate Gallery, then sell it to Charles Saatchi for a cool £150,000. Of course, bouts of suicidal depression are never fun or worth it, but if you happen to find yourself in the middle of one, you might as well get a few years’ rent out of it.
If you want to copy Tracey Emin the hard way, you can reach repeatedly into the darkest depths of your soul, pull out what you find there with your bare hands and, without retouching or even much aestheticizing, mount it on a neon sign knowing that it might end up on hanging above a Kardashian’s bed. 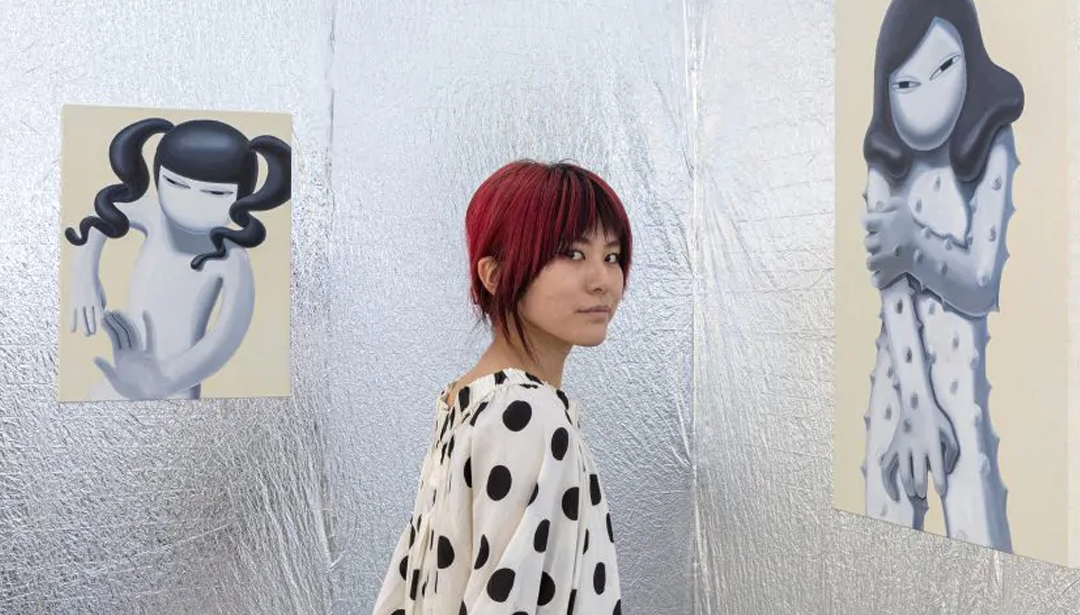 A Chat About Medusa & Mental Health with Ayane Yamamoto 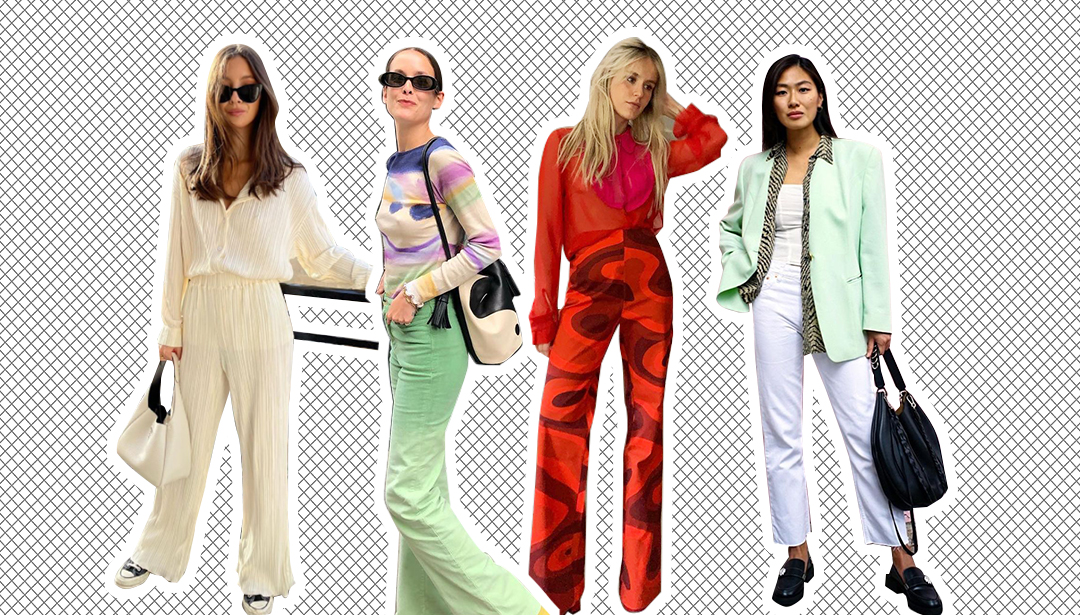 What to wear back to the office

Career: 10 Words You are Using Too Much in Your Emails