You know that while we focus on ladies on top of the art scene, we also love boys. How couldn’t we – especially when those are art gents like Ronny and Marcus.

Ok, lets start from the beginning – RON MILLER is a Berlin-based artist duo made of Ronny Kindt and Marcus Klüh. They have been active in the art scene since 2017, primarily focusing on creating original 2D and 3D works inspired by urban and conceptual art, with references to pop art and culture. While they have a knack for Asian culture (read more below), they also did a pretty amazing public art project in Berlin this summer, celebrating female heroines from different professional and cultural backgrounds. We loved to chat with this duo about their friendship, Geishas, Marie Curie and we feel its time you meet them too 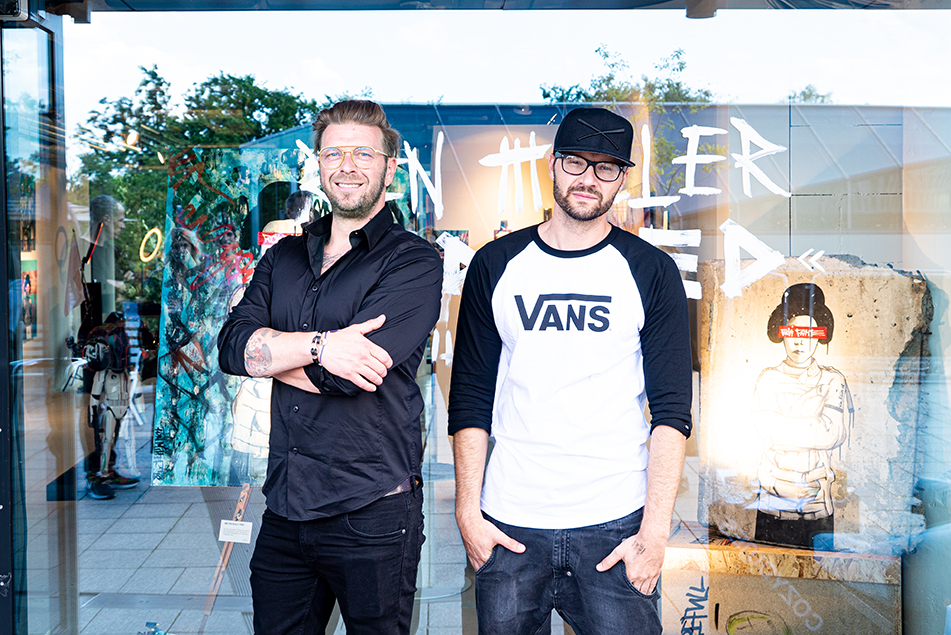 1. How can we imagine your 6 year old self to have been? What did you love most, what did you wanted to become back then… Did you already like art?

Ronny: I wanted to become a postman. As a 6 year old self, I felt it was a great lifestyle: you get to work in the open air, riding your bicycle everywhere, delivering a few letters here and there. In fact, this idea stayed with me at least for another 5 years. I found the work of a postman just fascinating! In terms of making art – as long as I can remember myself – I always used to draw, watercolor, and paint. Already from the young age I thought it was very important to sign my works and was perfecting my signature in the process. I imagined one day these ‘early works’ would be very valuable 😊

Marcus: Where I grew up in Lychen, we had this big toy store. I really enjoyed going there not so much to buy something, but simply to enjoy the variety of toys available. I felt that the people who worked there were lucky, but I didn’t really want to work there myself, I just didn’t think about my future career back then!

2. How did both of you get to work in the arts at the first place? And did you eventually start to work together

Ronny: When Marcus left Berlin and moved to Switzerland, I dissolved his household and came into possession of his paintings. While missing him, my longing to paint has returned. After Marcus’ return from Switzerland, we started to paint together. Usually at night kind of keeping it our secret. After two or three evenings we sat on the Spree, had a beer and it was at that point that we have decided to do something that would make us both happy – to paint together professionally!

Marcus: Ronny has been working in design and has always been very creative, while I have always been interested in handiwork and carpentry as a hobby, and even worked in that for a while. 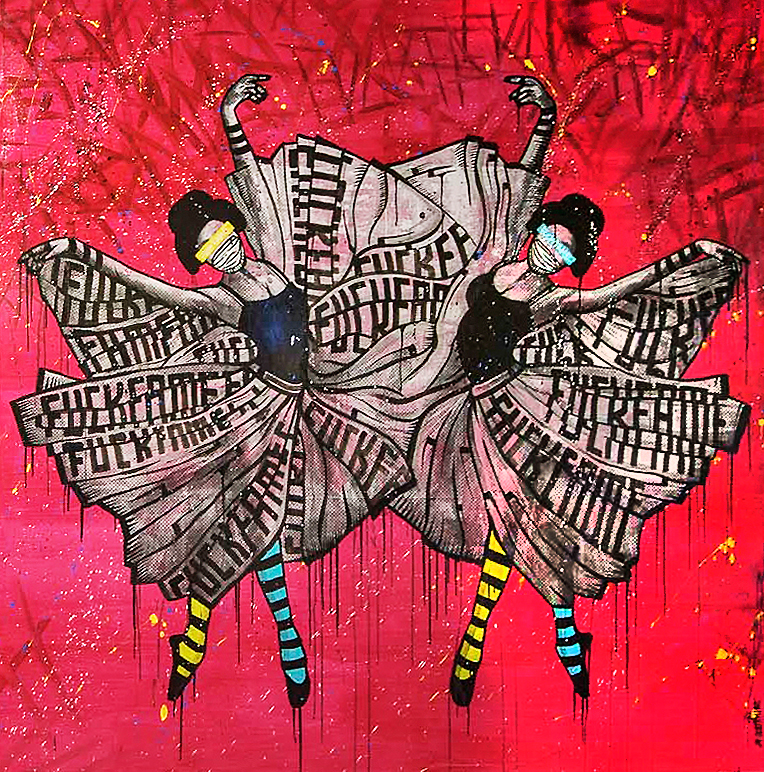 3. How is it when your best friend is also your business partner. Do you sometimes need a break from each other?

Ronny: You probably more than me!

Marcus: In the beginning we definitely needed some time to adjust to that idea! First of course we faced some differences in our vision how to do things, and when it came to talking about the professional decision-making processes behind making and promoting our art, we had to separate very precisely our relationship from our business, although it was not always easy. We learned to do it, which I think not everyone is capable of.

Ronny: I have been a freelancer for years and in the process I have develop a certain way of doing things because it has been proven to be the most efficient and productive way to do something, in my opinion. For a long time I was used to being the loan fighter and make my own decisions and be accountable for them, and then having a partner was definitely something I had to get used to.

Marcus: At first Ronny did not think it was necessary to explain to me his decisions and ideas behind his actions and commands, but with time he learned to do that and since then – it has been a smooth sailing!

Ronny: In the end – it is as always in life – the key to any relationship is good communication! When it comes to issues, they need to be discussed right away, without waiting for them to accumulate, growing in frustration. We always try to discuss everything to avoid misunderstandings and conflict. As for the second half of the question – it’s not that we need time away from each other, but sometimes we need time away from our work. Especially when we’ve had really busy production periods and worked a lot on a project, we both had to take a couple of weeks off to rest so that the creative juices could flow again 😊 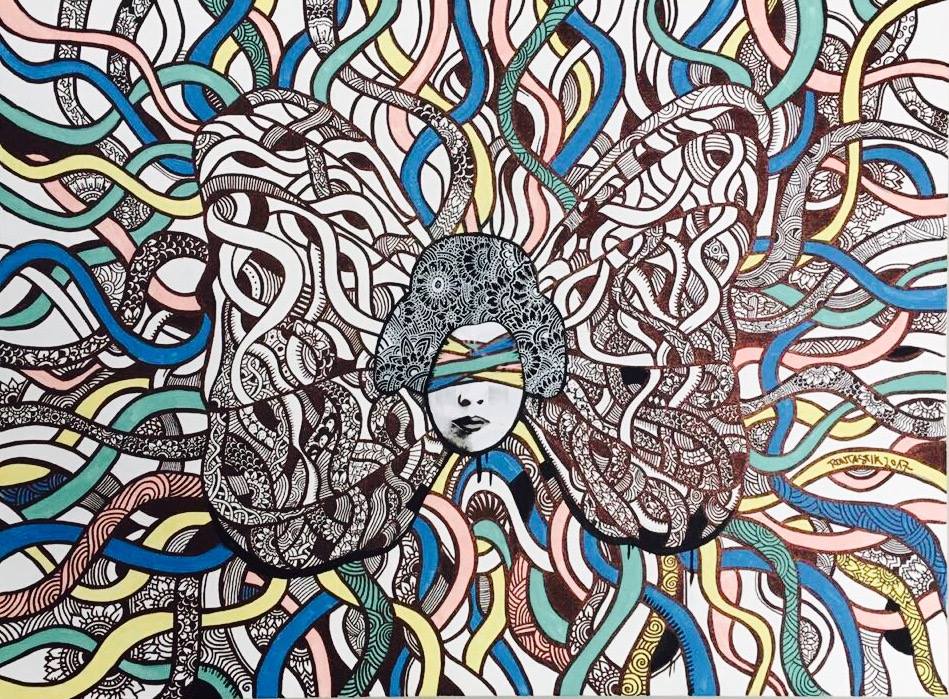 4. Two of your most prominent series are Geisha and FUCK FAME. Tell us a bit more?

Ronny: When we started to paint together, we knew we had to have a main character in our visual stories, some kind of a figure who would be present throughout our art works as a type of a hero. Since we love to look over vintage things for inspiration, one day we were at a flee market and we discovered an old illustration of a Geisha. At that moment, something clicked and we chose her to be the main motive in our paintings

Ronny (continues): Honestly, we don’t know why the Geisha, it could have been any other character! In retrospect of course we are happy with our choice: the mysterious character of the Geisha has indeed inspired many of our paintings, where we played around with the concept of her being limited and even prohibited to self-express her uniqueness and individuality, in contract to the obsession with self-expression and individuality in the West.

Marcus: We started with the Geisha being quite traditionally drawn, then we began to experiment with her face, outfit and the context in which she was painted in. Since the beginning, we’ve always used the words FUCK FAME somewhere in our paintings. These days we paint the Geisha with a face mask and write FUCK FAME over her eyes. Because for us the Geisha has transformed over time and from a hero became more of a trademark, we do not feel bad about covering her face that way. We want people to see her and think ‘Ron Miller’, focusing more on what she does instead of who she is.

Ronny: FUCK FAME has been with us since the beginning. We approach the subject of fame with irony, not condemning nor glorifying it. Coming to terms with the concept of fame is just a part of our modern life, especially these days when we are obsessed with celebrity culture as a way to keep up with the cool and addicted to social media to seek fame, power or influence. 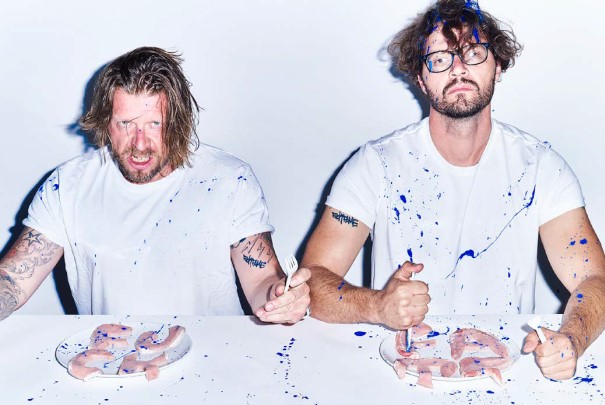 5. This summer, you celebrated female heroines at Alexanderplatz. Can you share some details and also how this project was perceived?

Ronny: Diana from Street Art Berlin came to us and offered to participate in the A-FENCE Project. We’re talking about a construction site in the heart of Alexanderplatz that was made available for chosen urban artists to present themselves on a 130 meter long wall and create works that would fit under the topic of Europe. This is where we got the idea to showcase our True Heroines whom we have already researched, conceptualized, and prepared for a project in Milan, that did not take place due to the pandemic. As a result we had to focus on the True Heroines from Europe, some of whom are historical figures, while others are not very well-known women who are role models, activist, and just super inspiring individuals who challenge our social notions, outdated stereotypes, and collective ignorance.