Julia Fox met Kanye over New Year in Miami. The rapper then took her on a date to see ‘Slave Boy’ in New York City and wined and dined her at Carbone, dressing her in the latest looks from Diesel. At the restaurant, Ye (the name Kanye now goes by) directed a photo shoot for Fox while people dined. After dinner Ye surprised Fox with an entire hotel suite full of clothes.

And how do we know all this information? Julia Fox shared the story of their first date in an Interview magazine feature, which included PDA-heavy photos of the new lovebirds.


She mentioned in the article that they had an ‘instant connection’, ‘It was every girl’s dream come true. It felt like a real Cinderella moment.’ And ‘Everything with us has been so organic. I don’t know where things are headed but if this is any indication of the future I’m loving the ride.’

After the widely circulated feature in Interview Magazine, we can imagine there was an uptick on searches around the world for  – who is Julia Fox?. Well, let us confirm to you all that she is so much more than just ‘Ye’s new girlfriend’…

Julia Fox is a 31-year-old Italian American actress, artist, model, and filmmaker. As an actress, she is known for her debut performance in the 2019 film Uncut Gems, for which she was nominated for the Breakthrough Actor Award at the 2019 Gotham Awards. Vogue has called her a modern bombshell. Before making her name as an actress, Fox has been working her way through many artistic forms of expression for years, often attempting to find new ways of representing herself in various creative formats. Not only has she worked as an actress, but she has also worked as a dominatrix, clothing designer, and an exhibiting painter and photographer, with two published art books.

Here, we explore further into Julia Fox’s connection to the art world.

In 2015, Fox released a released a raw, autobiographical art book called  ‘Symptomatic of a relationship gone sour: ‘Heartburn/Nausea’. The book is a collection of documents from her life, including photographs, personal messages and a number of personal details. Not hesitant at all, the artist shared her most vulnerable moments with the world in her debut art book. When asked by journalist Rose Holtermann about it, Fox answered: “It’s just a picture book of artifacts and stuff I have collected over the years. I’m not sure what the message behind it is. I guess since my life is so different now and I’m somewhat successful and happy, the message is that it’s ok to be fucked up. It’s ok to have a past. And more importantly it’s ok to show your vulnerability and your weaknesses. And if you are fucked up and able to use it to your advantage, you are probably more interesting and insightful than most. So just like don’t be ashamed of yourself.”

In 2016, Fox unveiled her debut solo exhibition, PTSD, at Magic Gallery in NYC, curated by friend and Curator, Richie Shazam. Fox went to Louisiana, camera in tow, after needing what she called “a sabbatical” from the city. She travelled the American South and shot what she witnessed.

The exhibition featured a series of hardcore photographs and an iPhone video that Fox described as art that shows audiences “a reality so far from theirs.” The six-minute camera phone video, The First Time, showed Fox lying in bed sharing an intimate moment with a female figure. Curator, Shazam installed a bed inside the gallery at the time to allow viewers to sit or lay and experience the work in a similar way in which it was created. Alongside the exhibition, Fox also self-published a book going by the same name ‘PTSD’. In the book, alongside images – are selected love letters and poems.

In 2017 Fox worked with curator again Richie Shazam eulogizing — if only metaphorically — the enigmatic Downtown Manhattan persona of Fox, who had snuck into clubs with a fake ID at 14 and who narrowly escaped an early death by overdose at 17 in an debut art show titled “R.I.P. Julia Fox”.

The art exhibit featured silk canvases painted with her own blood. A fixture in New York nightlife in the early aughts, when she was just a teenager, Fox has towed the line of excitement and danger. 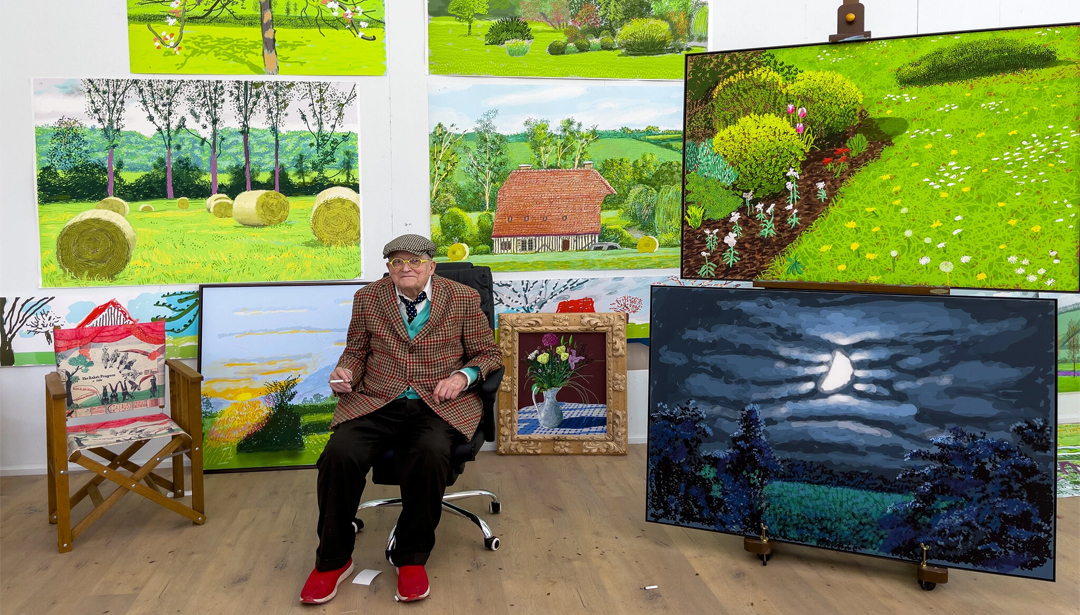 David Hockney Lights Up Billboards Across The World

Must-have Apps, Software, and Newsletters to Boss Your Career